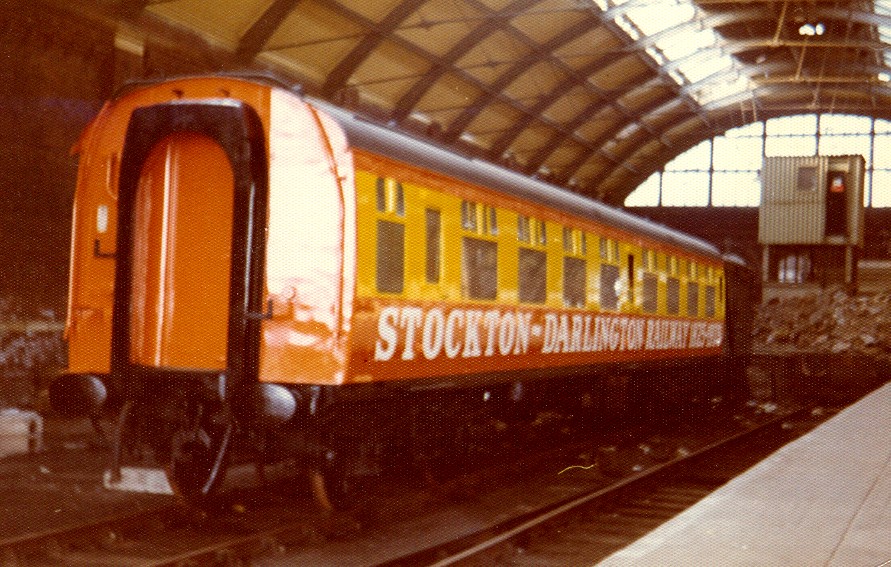 BR Mark 1 TSO 4347 is pictured at Stockton-on-Tees station, very much in ex works condition, promoting the ‘Stockton-Darlington Railway 1825-1975’ celebrations. It is believed that shortly after this photograph was taken it was moved to John Walker Square, Stockton-on-Tees. After the celebrations it moved to Preston Hall park, Preston-on-Tees from where it was disposed of but to where?   Terry Bye

It is often not realised how many items of locomotive hauled coaching stock that were acquired for preservation or for other uses, such as restaurant dining rooms, have subsequently been scrapped. The aim of this conundrum is to list all those carriages that fall into this category. For each, a potted history is given of their histories after having been taken out of normal service with British Railways or its descendants. Precise details of the disposal of many has been hard to establish and consequently any further information would be very much appreciated. Where preservation locations have changed names the most recent is normally quoted. Similarly, where Counties are quoted the current name is usually used. Although often recorded as broken up on site, this is often not the case in reality. A number of vehicles have been acquired by preservationists as complete vehicles. Then either the body has been broken up and chassis retained, vice versa, or in some cases the body has been grounded or mated with a different chassis and original chassis mated with another body. These are listed as disposals except when body and chassis both survive in preservation.

In addition, also listed at the end, are the bodies of non-passenger coaching stock that saw use at non preservation locations and are now scrapped. For these just the location they were located is shown.

This listing is still very much a ‘work in progress’ with further information being continually added. Any help that can be given would be very much appreciated.