The MAT Transauto fleet of Carflat’s and Car Ramp’s totalled one hundred and forty-seven. The majority of these were Carflat’s but several had a ramp. Those identified as such are listed below. Whilst some references record these as utilising Mark I underframes this appears to be incorrect. Research suggests that most, if not all actually used Southern Railway 59′ underframes cut into two then spliced together to form 63′ Carflats. Please make contact if you can shed more light on the originns of these Carflats. 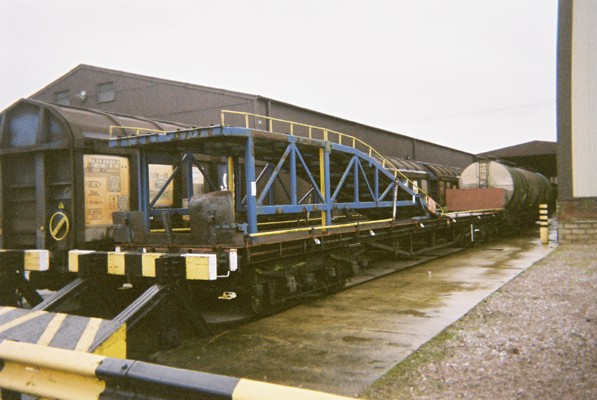 These were different to the BR Cartic Ramps on BR Mk I underframes in that the ramp only took up half of the wagon. Thus, side loading of cars under the ramp and on to the lower deck of a Cartic set was not possible. However, it was possible to drive a car into the area beneath the ramp from an adjacent Cartic or Carflat wagon. It was also possible to place a car on the section of the wagon not taken up with the ramp. Thus, these ramps could if required, run in car trains and carry two cars.

This was observed at King’s Lynn in 1984 and Bordesley, Birmingham in 1991. Now presumed scrapped.

This was observed at Crescent Road Yard, Luton in 1981. Now presumed scrapped.

This was photographed at Southampton in 1978. Now presumed scrapped.

This was observed at Leith, Edinburgh in 1985. Now presumed scrapped.

This was observed in 1979 at Bevios Park, Southampton. It is currently located at Ely Freight Terminal, Queen Adelaide, near Ely, where it has been located for a considerable number of years, having first been seen there in 2005.

Additional information about these Cartic Ramps, would be welcomed by Peter Hall.