Chipman Chemical Company  trains were based at Horsham, West Sussex.  The Company had first supplied Spraying equipment and Chemicals to the Southern Railway in 1935 who then had their own trains.  This arrangement continuing with the descendant BR Southern Region.  At some point, certainly by the mid 1960's, the whole Southern Region contract including train provision was passed to Chipman Chemical Company.

However,  it seams that prior to this, in 1955, a train to the requirements of the Chief Civil Engineer, Eastern Region had been designed and equipped by the Chipman Chemical Company.  This was placed in service on April 17 1955  and was used on the Eastern and North Eastern Regions.  Included in the formation were a Staff & Dormitory Van numbered CWT1  and a Machinery & Spray Van numbered CWT2.  These had been  converted from SR PMV's,  the most likely candidates being 2201 & 2203,  but it has not been possible to confirm this.   An article about this train appeared in the May 6, 1955 edition of the Railway Gazette.  CWT1 & CWT2 were withdrawn in 1966 and it is presumed the train saw regular use until then. In November 1967 CWT1 & CWT2 were sold to E,G, Steele for scrap.

Very little else is known about these trains , please make contact if you know of any references or photographs that give more details about this period.  The details so far known known about CWT1 - CWT6 are below.   Further information about these carriages would be welcomed.

By the mid 1960's the original carriages, CWT1-6, had all been replaced with former SR Maunsel & Bulleid design carriages. This process started in 1963 when Maunsell BTK 3724 and CK 5644 were converted at Lancing to Spray Coach CWT7 and Staff & Dormitory Coach CWT8 respectively. These being referred to as "Train 4" and the pictures below show these carriages in use in 1965 and 1975.  The carriages which were converted to CWT9-12 were sold to Chipmans in March 1965 and CWT13 in November 1965.  Adaptation for Weedkilling Train use followed soon after. 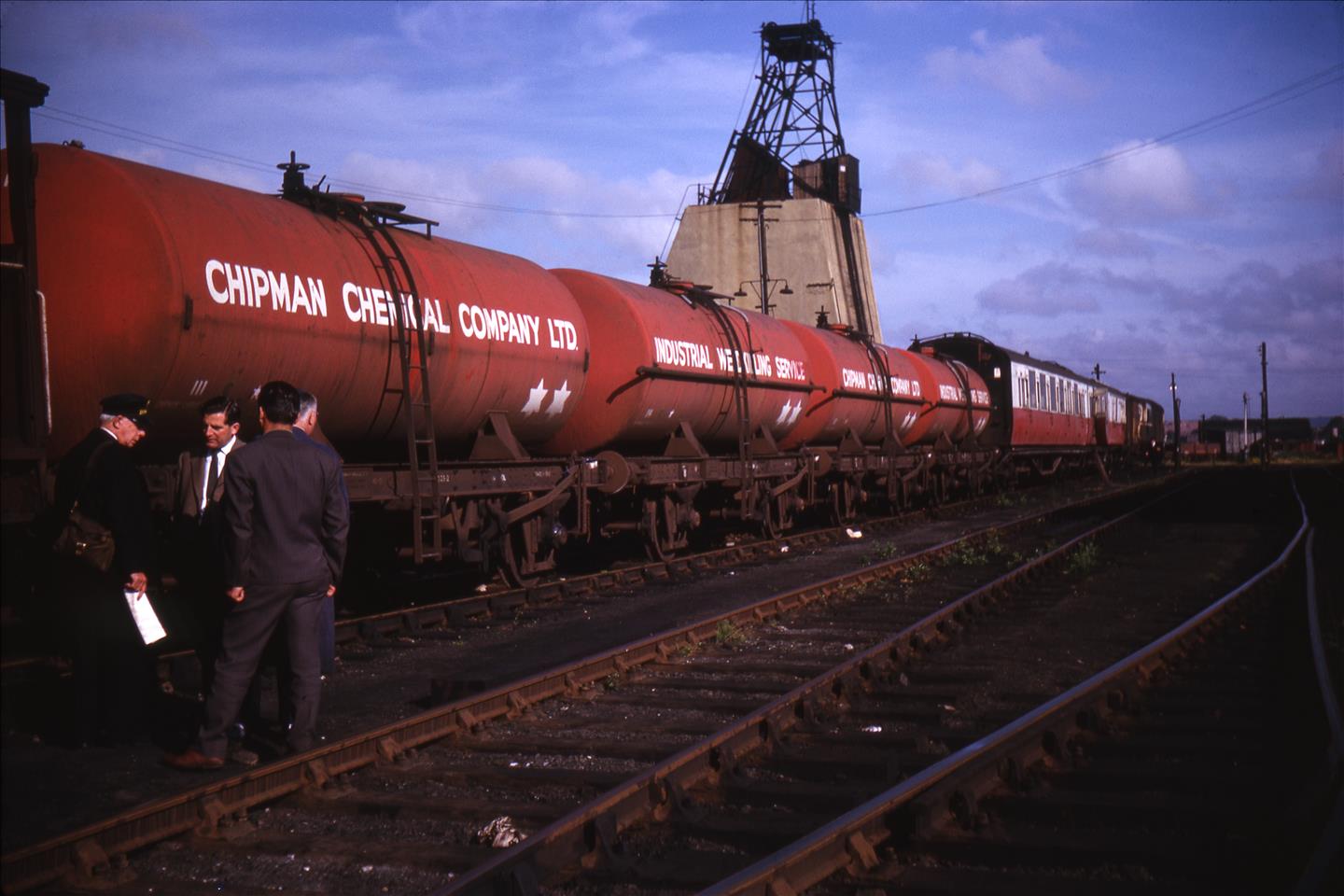 The gentlemen in the centre of this group is John Chamberlain who was then Chief Engineer of Chipman Chemical Company. The picture was taken at Cricklewood on 1st July 1965 and clearly shows the type of tank wagon then in use.   Michael Wild 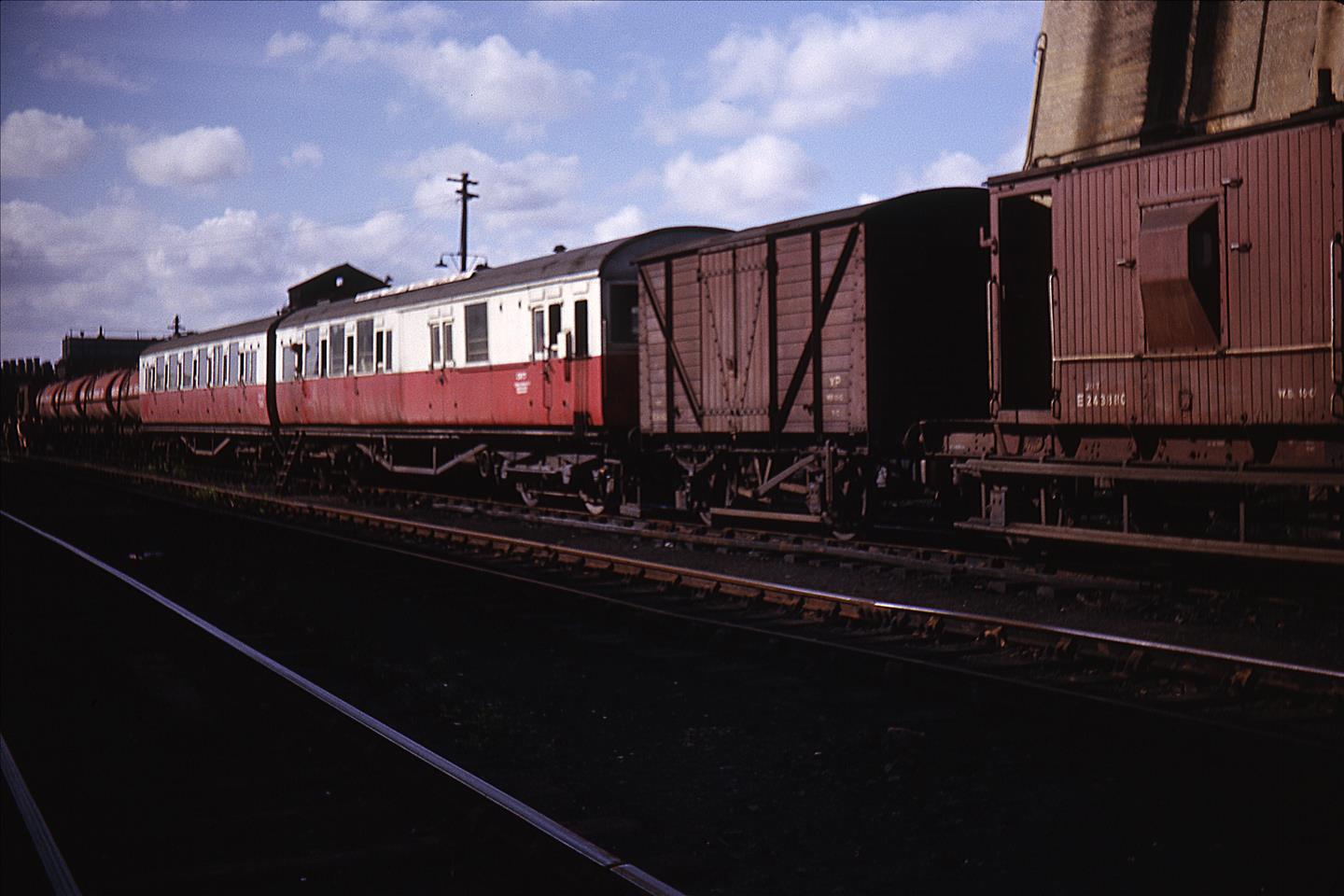 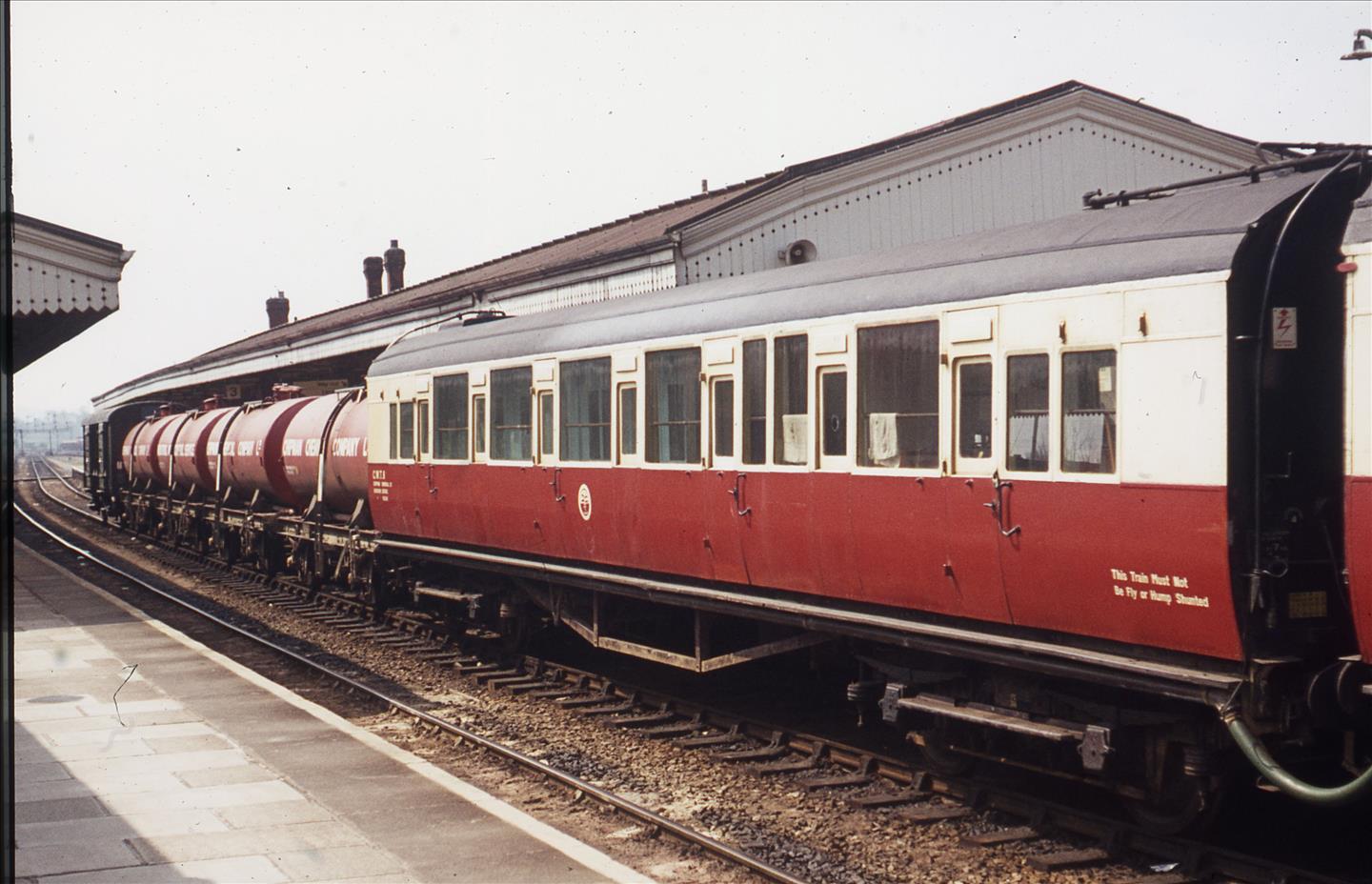 A decade lafter the above photographs the Chipman Chemical Company train passes through Westbury on 26th April 1975. The Staff & Dormitory Coach CWT8 converted from SR Maunsell design CK 5644 and tank wagons are tailed by what is presumably a SR BY for use by the guard..   Trevor Davis 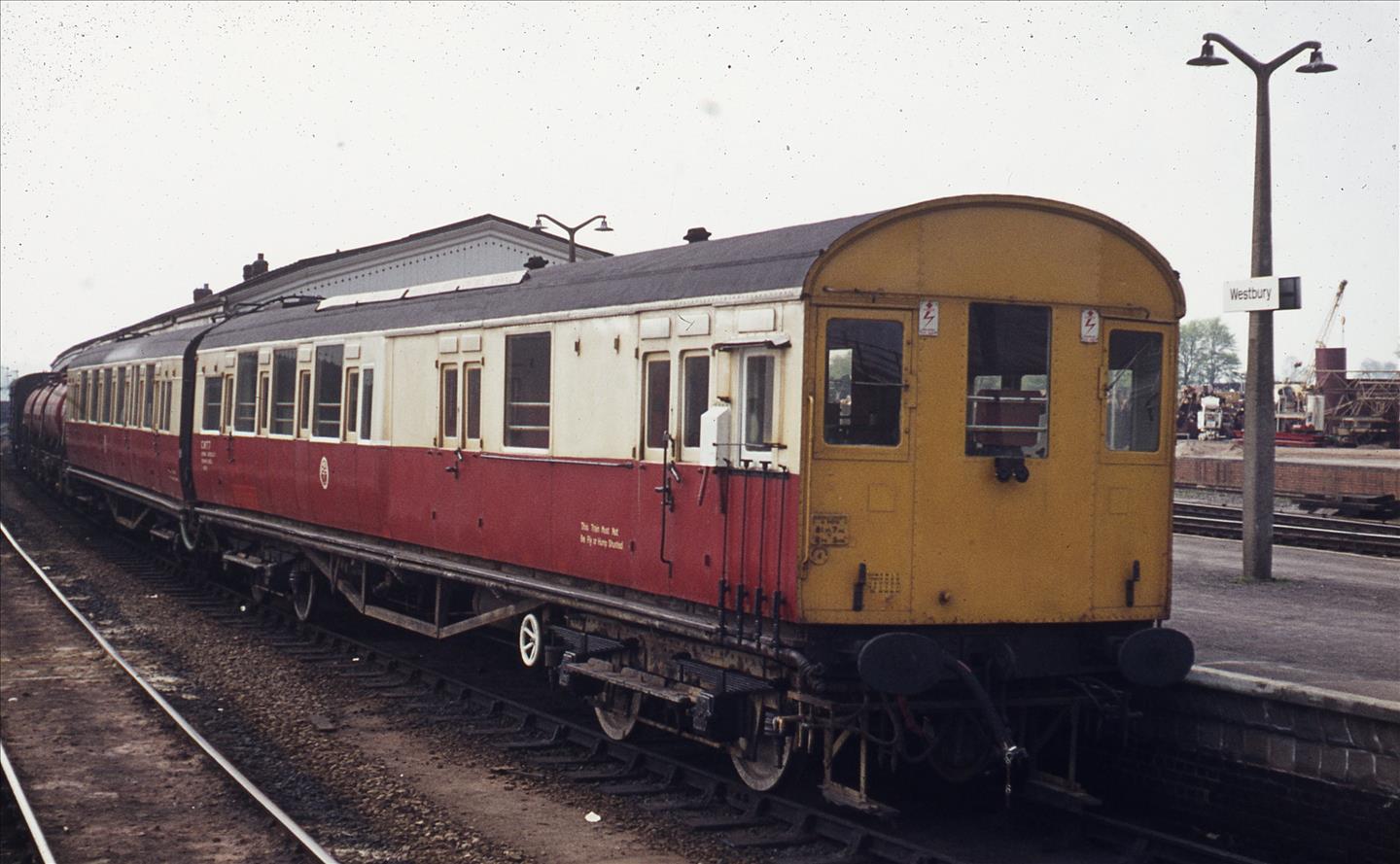 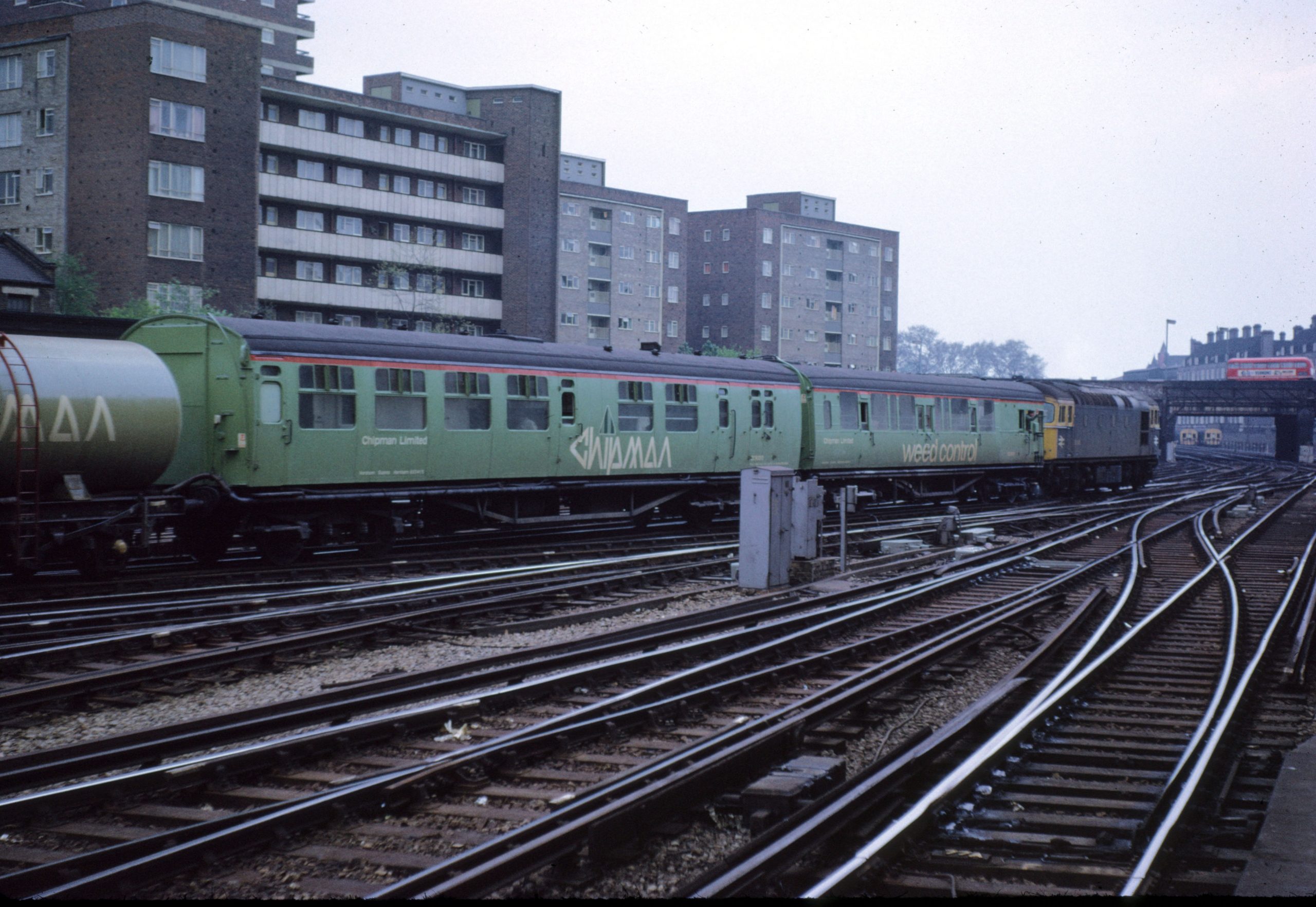 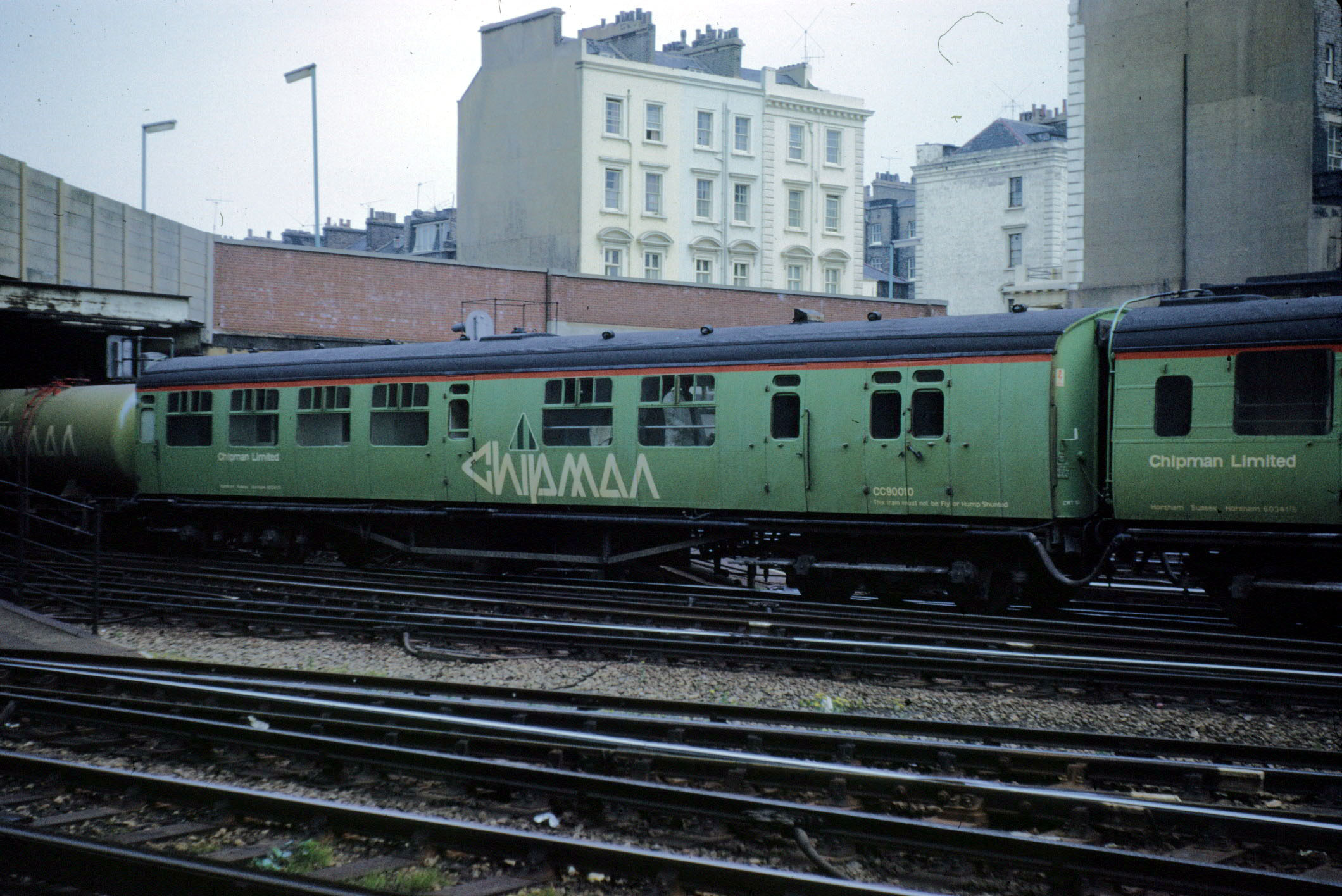 Towards the end of 1980 SR design General Utility Vans 4589 and 4600 were acquired and numbered CC99015 and CC99014 respectively. These were adapted for use as a Spray Coach (CC99014) and Staff and Dormitory Coach (CC99015). These replaced CC99009+CC99010. CC99009 then became the spare Spray Coach, displacing CC99011 which was disposed of to the Mid-Hants Railway, initially being stored at Basingstoke. CC99010 is believed to have seen no further use and was stored at Horsham until being disposed of to the North Yorkshire Moors Railway in 1988.

About 1987 Chipman Chemical Company was acquired by Nomix and subsequently traded as Nomix-Chipman.

Between 1989 and 1993 a fleet replacement program took place which culminated in the formation of a four carriage train of converted BR Mark I's. From 1989 only one train operated which was top n' tailed with Hunslet-Barclay Class 20 locomotives. The table details these carriages.

The train last operated in 1997 with the carriages being sold on for other uses in the rail industry the following year.

Another vehicle acquired was Ferry Scenery Van B889200.  This was acquired from Clapham Yard and moved to Horsham on 24th November 1987.  It is understood that it only saw static use at Horsham.  Subsequently it was sold to Venice-Simplon Orient Express and moved to Stewarts Lane on 15th January 1990.