Little was known about the BR Eastern Region Weedkilling train based at York when this conundrum was first conceived, but slowly more is emerging. The latest updates come from Michael Wild who was involved with design work on the train in the 1960’s and has been able to add greatly to our knowledge of it.

The train is believed to have debuted at an exhibition of plant and machinery held at Ponteland, near Newcastle-upon-Tyne in June 1961 where it was photographed. 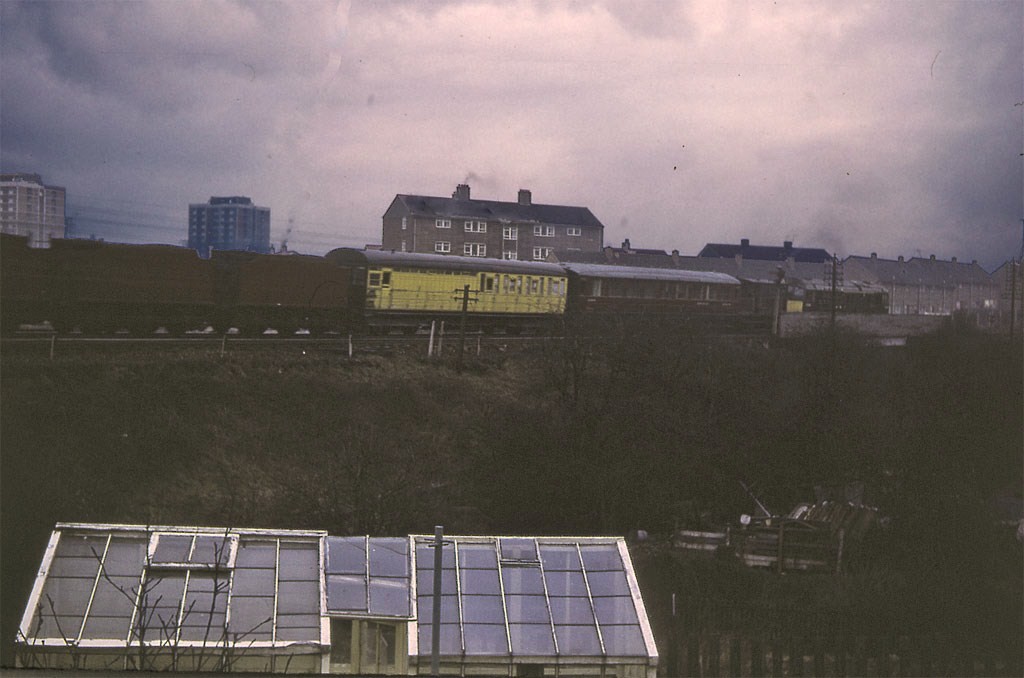 We are very grateful to Paul Johnson of the LNERCA who has contributed this photograph taken by his father in April 1962 showing the first weedkilling train the NE Region built. This covered the former North Eastern Region at the time. The Fisons train being used on the then Eastern Region. Similar to the Fisons Trains of the era (see above) the formation includes former steam locomotive tenders as water carriers. The ones in the photograph are though understood to have only been used in 1961 & 1962.

The carriages are of great interest. The one to the right is Staff & Dormitory Coach DE320946 converted from Corridor Third 12961. This is recorded as being taken into Departmental Stock in 1962 but it does seem it was first used in 1961.  It is presumed to have remained in use with the train until being replaced by DB975379 in C1975. The identity of the yellow Spray Coach is not known but it was converted from a Gresley [Non-corridor] Brake Third. This was its last full year in use as a Spray Coach being taken out of use the following year, it then being striped and discarded soon after. The pictures below being taken on its final outing. It was replaced with DE320995 that is recorded as being taken into Departmental Stock in 1963. This had been converted from Open Brake Third 16551.

The four locomotive tenders were taken from withdrawn V2 locomotives and were last used for weedkilling in 1964. It is believed they were numbered DE331865 – DE331868. During that year the Sleeper creosoting depot at West Hartlepool was closed and six-creosote carrying 22-ton tank wagons became available and these were numbered DB998966 – DB998971. Having roller bearing axle boxes and vacuum brakes they were ideal for weedkilling, significantly increasing the range of the train, an important factor in that water columns were being taken out of service with the declining numbers of steam locomotives. They were converted in the winter of 1964-65 and first used in 1965. 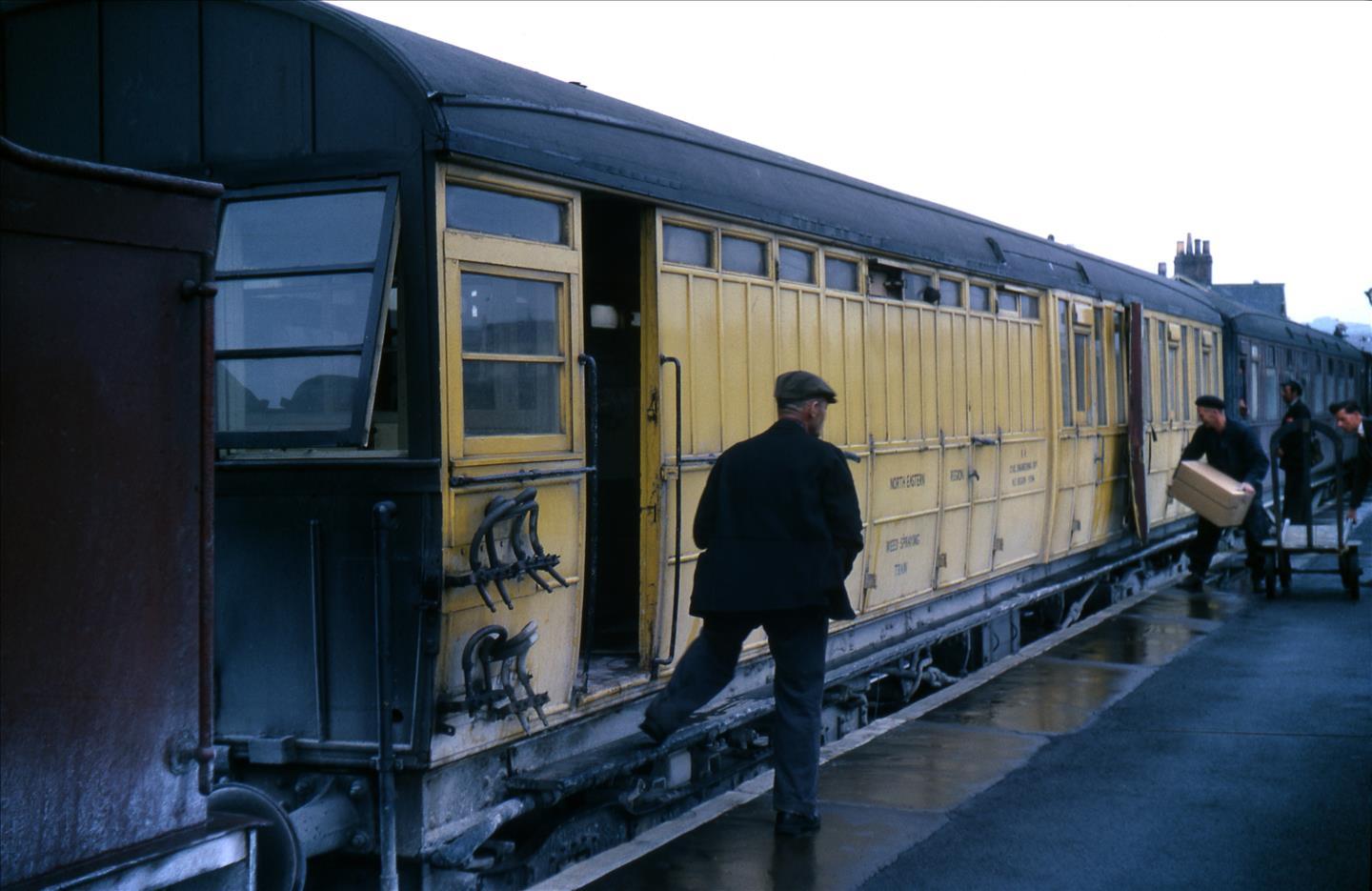 The original Spray Coach of the North Eastern Region Weedkilling Train is being loaded by Charlie Leng assisted by Train Captain Alan Wilkinson. The picture was taken at Seamer on 7th June 1963.   Michael Wild 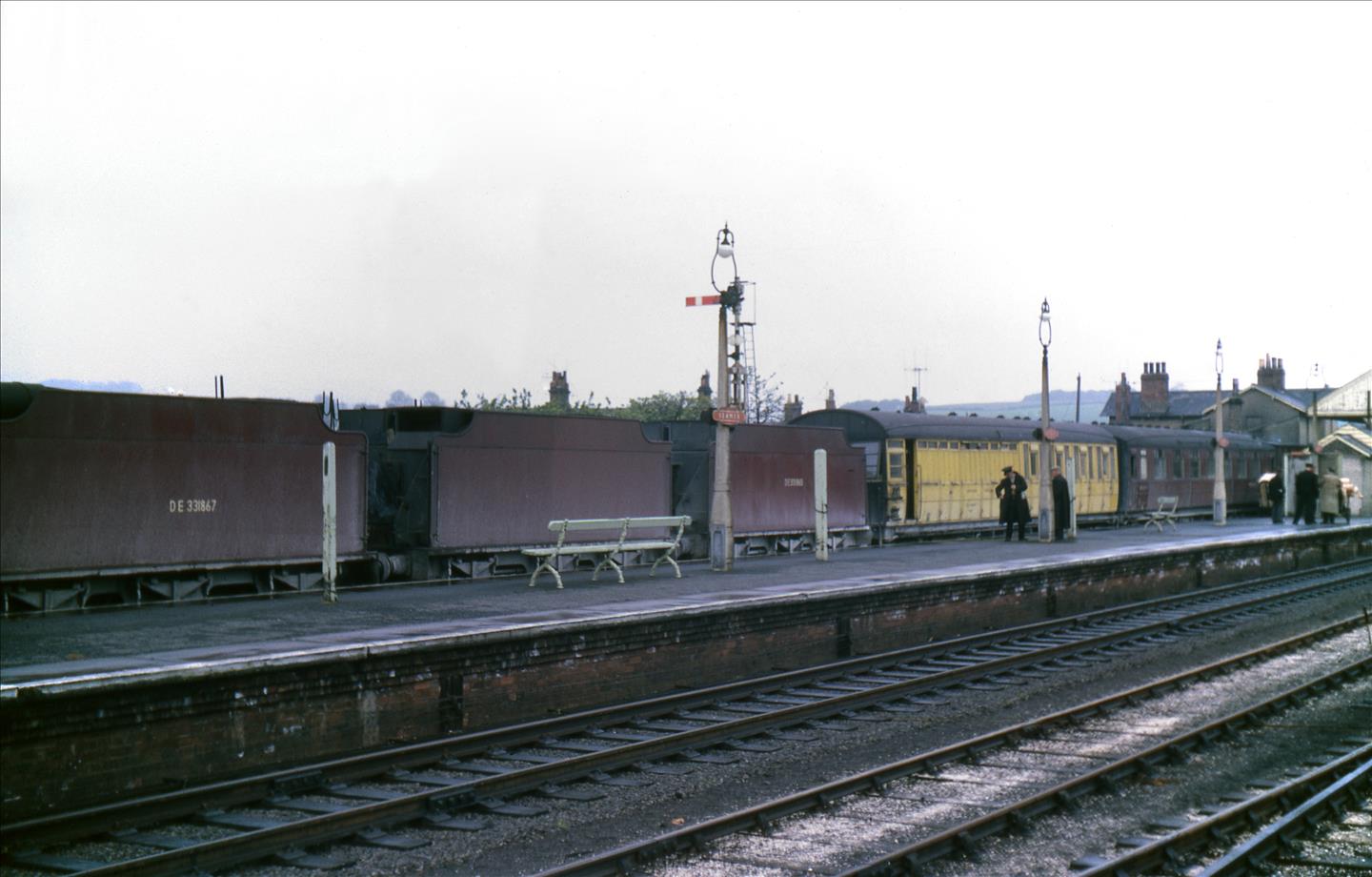 The North Eastern Region Weedkilling Train is pictured at Seamer on 7th June 1963. Soon after this picture was taken the yellow Spray Coach was replaced with newly converted DE320995. It is presumed the un-numbered tender is DE331866.   Michael Wild

The two pictures below show the replacement Spray Coach formed in the train in 1965. 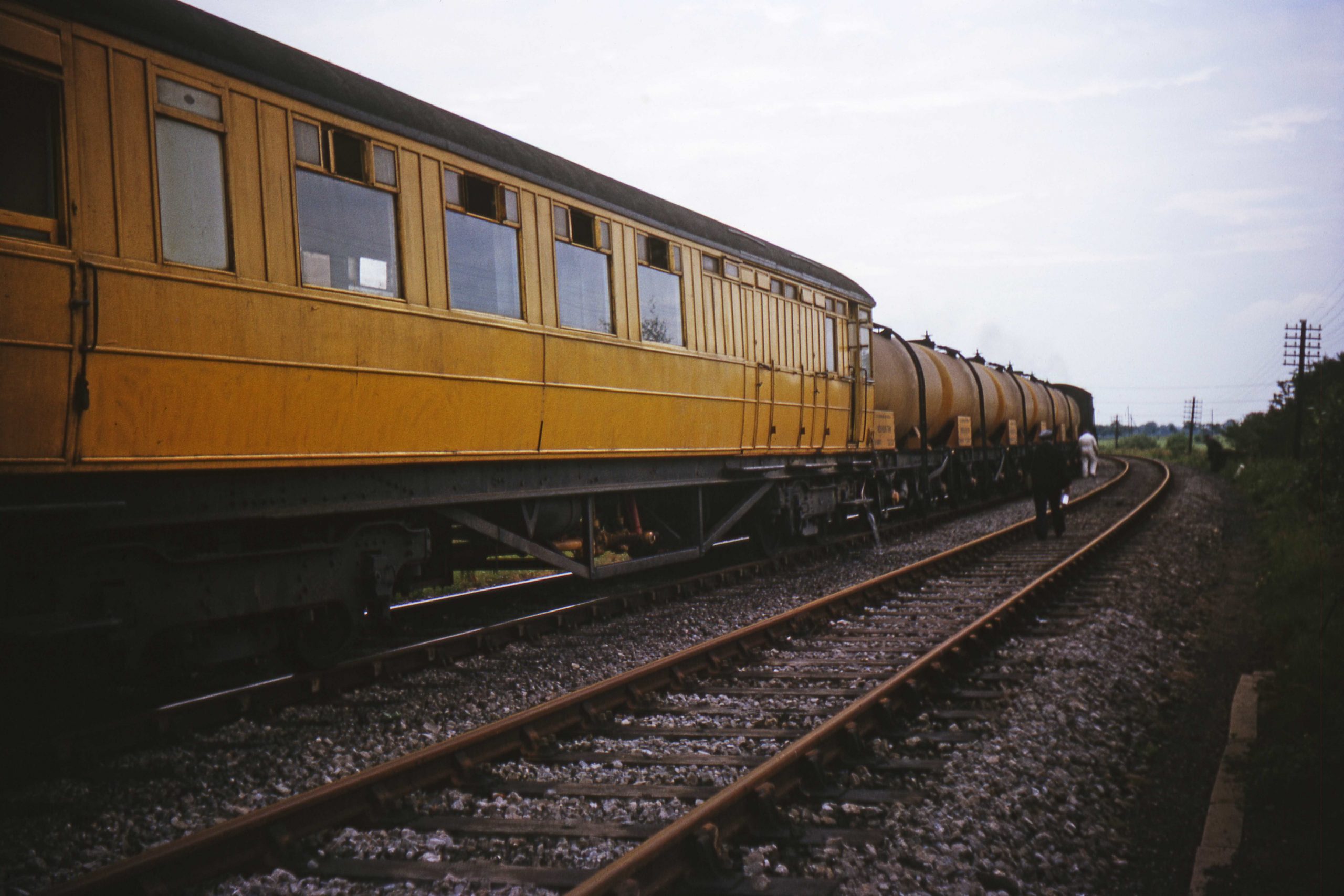 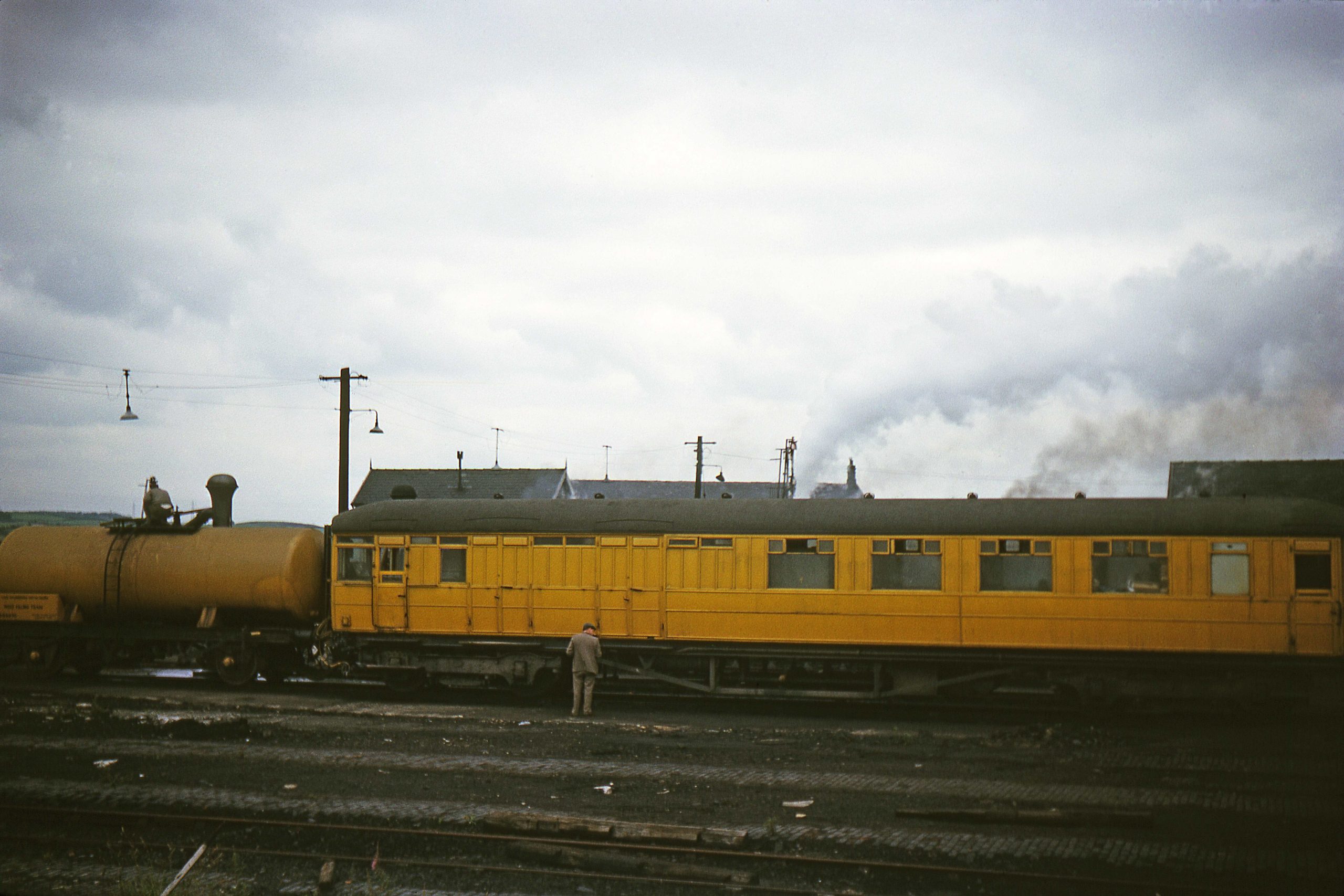 Paul has discovered a report of the trains visit to the North Yorkshire Moors Railway on 6th May 1974 when the consist was still six tank wagons, Staff & Dormitory Coach DE320946 and Spray Coach DE320995.

The train again visited the North Yorkshire Moors Railway on 6th May 1975 by which time the consist had significantly changed. It being formed of three stores vans, converted from LNER/BR Fish Vans or Vanfits, six tank wagons, Staff & Dormitory Coach DB975379 converted from BR Corridor Second 24982 and Spray Coach DE320995. DB975379 is recorded as being taken into Departmental Stock in 1974 so this may well have been its first season in use replacing DE320946 that subsequently saw use with a number of different On-Track machines throughout the Eastern Region.