Key to exposing the fabricated disposals listed in the What Happened to Steam books were the J. Cashmore records the What Really Happened to Steam project  possesses. The same records do not contain several diesel locomotives widely recorded as being scrapped by the company. Examples of these are D2122, D3117 and D5383 (see below). Whilst it is possible this could be the result of clerical errors, no verifiable observations of any of these locomotives in the company’s yards have emerged. 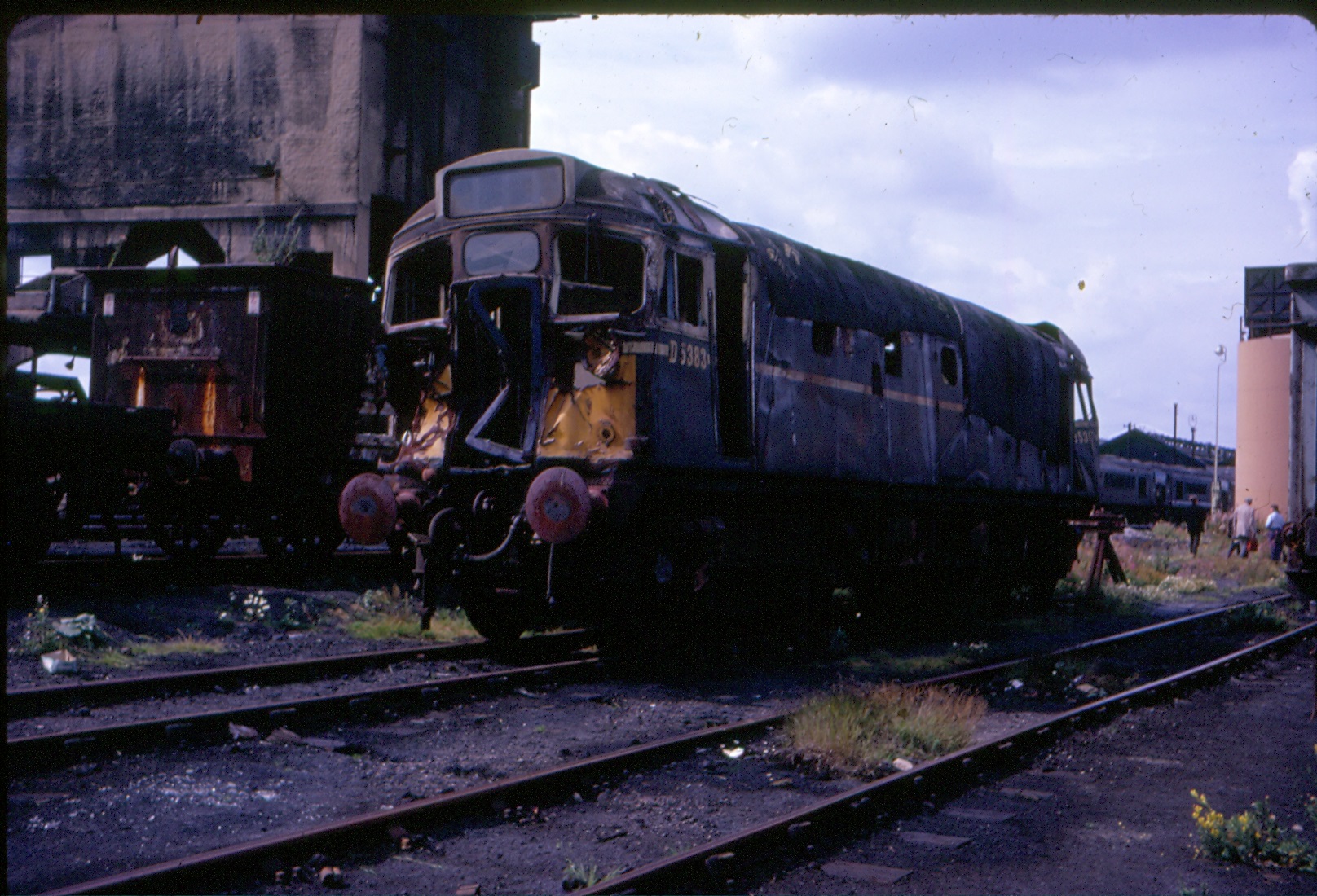 D5383 pictured at Derby shed, adajacent to Derby Locomotive works during the Open Day there on 26th August 1967. Its condition suggests that it had been cannibalized and prepared for movement.

D5383 was badly damaged when involved in an accident at East Langton, between Leicester and Market Harborough, on 20th August 1965. This subsequently lead to its withdrawal and by the end of November 1965 D5383 had reached Derby Works where published photographs suggest it was cannibalized. Reports published in The ‘Railway Observer’ at the time list D5383 as still being at Derby Works on 25th June 1967 (p.263 August 1967) but is not listed as present there or at the adjacent shed on 30th July 1967 (p.298 September 1967). The latter also recording the sale of D5383 to J. Cashmore, Great Bridge. However, the above picture taken on 26th August 1967 at Derby locomotive shed confirms it was still at Derby then.

The photographer says “I took the photo of D5383 because it had clearly just been fitted with new ‘Oleo’ buffers which seemed a waste when it wasn’t being repaired. Looking at my photo, it also seems to have been fitted with new vacuum hose and draw hook. The photo was definitely taken at Derby, and I’m fairly sure it was taken at the shed, not the works (note coaling plant, pit, and water softening sludge tender). The logic to me would be that it was made fit to be hauled away in the works, and then moved over to the shed for movement. That also explains the rust on the buffer-faces – paint wiped off to bare steel when moved, rained so went rusty.”

D5383 continues to be recorded in visit reports to Derby Works / Shed throughout September 1967. The last known sighting being that by by Ian Lander on 1st October 1967. It can thus be concluded that not long after that D5383 left Derby, but when and where did it go?

Any dated observations of D5383 made on or after 1st October 1967 would be most welcomed as would any other information that might help establish beyond doubt what happened to D5383 after it left Derby. 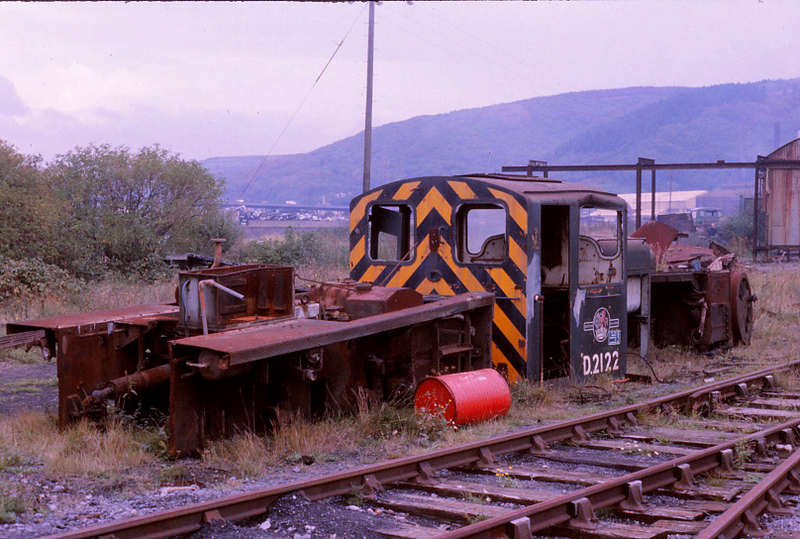 However, even before the disposal of D2122 appeared in ‘The Railway Observer’ a report of a visit to Duport Steel Works, Briton Ferry on 24th August 1975 had appeared in the ‘IRS Bulletin’ (197/11). On this visit the dismantled remains of D2122 had been observed. This discovery was mentioned in ‘The Railway Observer’ (p.126 April 1978). This was followed a couple of months later (p.211 June 1978) by the comment that “D2122 was actually sold to R. E. Trem, Finningley and was taken away from Landore by road on 9th September 1974, consignee unknown.” Although it is then concluded that D2122 almost certainly went to J. Cashmore, Newport where it was dismantled before passing to Duport Steelworks, this now seems highly improbable for a number of reasons. Firstly, the locomotive is not recorded in the J. Cashmore records now in the possession of the What Really Happened to Steam project. Secondly, no observations have emerged of it at the premises of J. Cashmore, Newport or anywhere else in the area. Thirdly, R. E. Trem had previously been involved in providing Ex BR locomotives to Duport Steel Works at both Briton Ferry and Llanelli. Fourthly, no other locomotives sold by BR to R. E. Trem were consigned to a J. Cashmore yard as far as we are aware.

It is now fair to conclude D2122 went directly from Swansea Landore Depot to Duport Steel Works, Briton Ferry on 9th September 1974 and was never at J. Cashmore, Newport. Dated observations of D2122 between September 1974 and August 1975 would though be very much appreciated as would photographs taken after withdrawal. 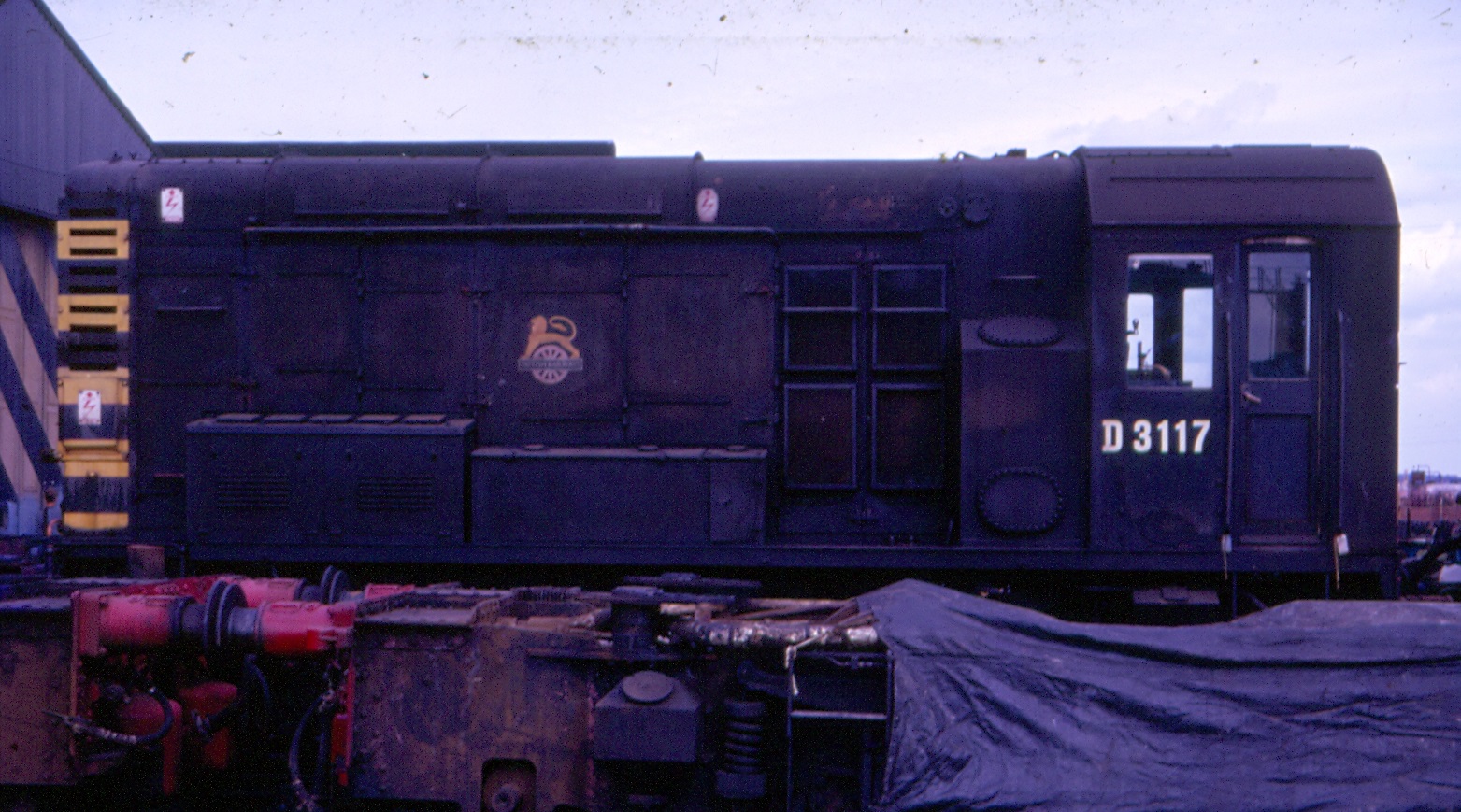 The Railway Observer of April 1971 (p.115-118) contained a listing of locomotives for which the disposal details were not known, which included D3117. It is not known whether ‘Zulu’ submitted any information about D3117 to ‘The Railway Observer’ as a result. However, two references subsequently appeared which may have ‘Zulu’ fingerprints on them. Firstly, in August 1972 (p.281) one which stated that D3117 is presumed to have been cut up at Derby Works between 3rd September 1967 and 8th October 1967. Secondly, in March 1973 (p.89) where it says “D3117 was not cut up at Derby Works as suggested but was sold to Cashmores, Great Bridge, in October 1967”.

Whilst the Cashmores, Great Bridge disposal is quite probable, D3117 is not shown in the J. Cashmore records now in the possession of the What Really Happened to Steam project as having been scrapped there. Neither have any observations emerged of it at the premises of J. Cashmore, Great Bridge or thereabouts in transit. It is also worthy of mention that D3117 disappeared from Derby at exactly the same time as D3193. Could it be that it went to Italy? Further information about this possibility can be found here.

Please contact Peter Hall if you have comments, sightings etc