Reference is made in The Attilio Rossi ex-BRs D2232 and 13xxx-D3xxx to the possibility of the mystery 350 hp Class 08/10 in Italy being D3193. This being recorded in the various disposal books as being scrapped at Derby Works. Similarly D3020, D3034, D3051, D3121, 12011/29/30/62/89/91 & ED2 have been recorded as scrapped at Derby Works.  However, as recorded below, this information is known not to be correct with regard to ED2 and if this was not scrapped at Derby what about the others?  In addition, although D3117 and D5383 are recorded in ‘Pronounced Life Extinct’ and all subsequent disposal books as scrapped at Cashmore, Great Bridge they do not appear in that companies records. Both having last been seen at Derby Works, see What actually happened to D5383? (and other J. Cashmore anomalies) for further details. 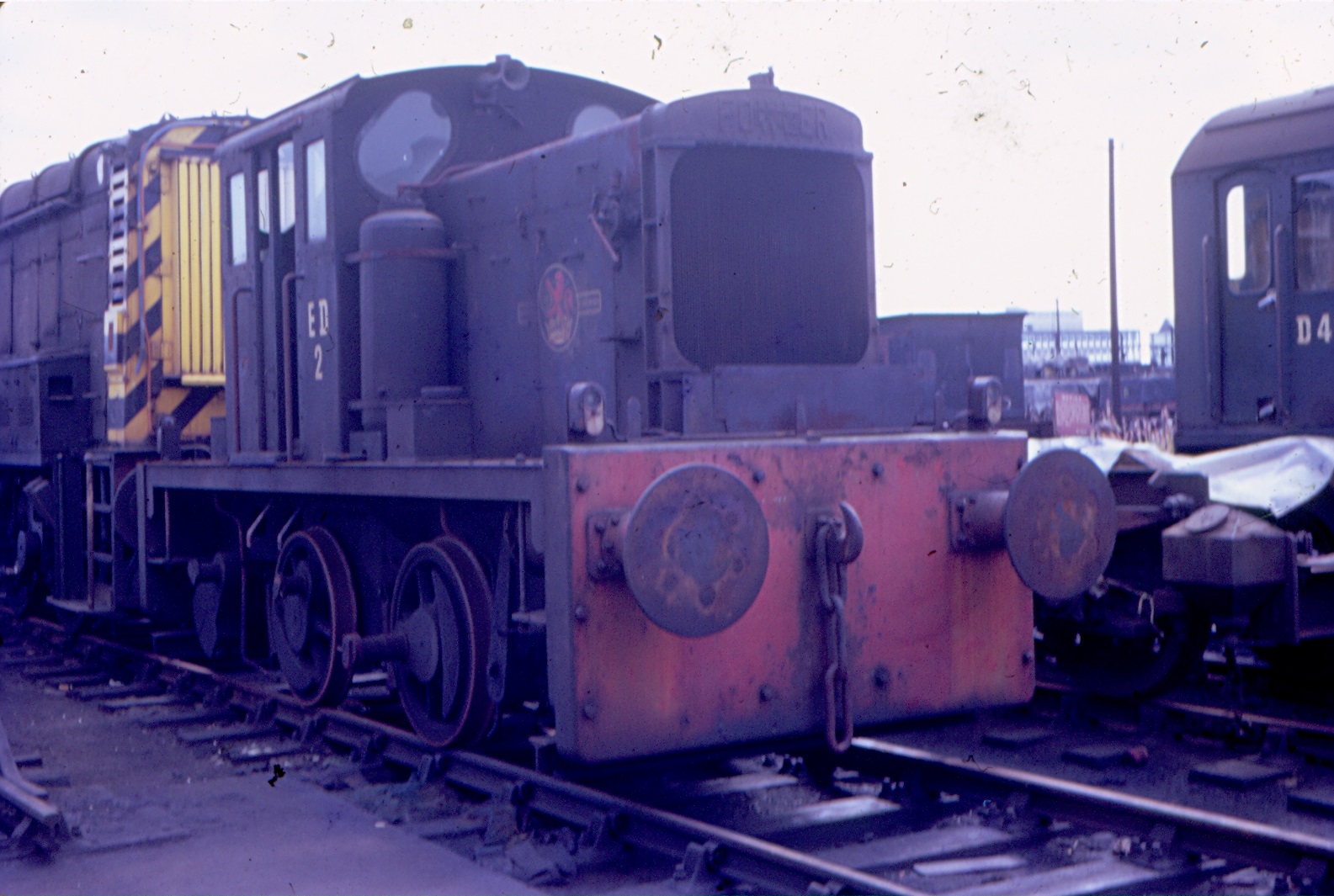 ED2 was photographed at Derby Works during the Works Open Day of 26th August 1967. Graham Ledger

The doubt about the disposal of ED2 came about following a conversation with an enthusiast who was a second man in 1968 based at Tinsley.  Fortunately, he recorded much at the time and on 6th February 1968 he was second man on 7E15 05.00 Derby St. Marys – Tinsley Yard freight headed by 5683. He recalls and recorded that the train stopped at Clay Cross and attached ED2 from the sidings. With ED2 in the formation the train continued to Tapton (Chesterfield) loop where ED2 was removed from the train. Although there was a direct connection from Tapton loop into the yard of Steelbreaking & Dismantling there is no evidence that this was its final destination. No observation of it being in that yard having been traced. Subsequent to this conversation the What Really Happened to Steam project unearthed copies of two official BR letters showing ED2 was dispatched from Derby on 5th February 1968 destined for the Rotherham yard of G. Cohen Sons & Company Ltd. Interestingly, every Diesel Disposal book records ED2 to have been scrapped at Derby Works and those that quote a date usually give September 1967! Quite clearly it was not scrapped at Derby Works, so if this was not scrapped there what about the others? In addition, enthusiast Howard Bolton has been in contact to say that his records show ED2 still to be present at Derby Works as late as 21st January 1968!

The disposal of D3121 is shown in ‘Pronounced Like Extinct’ as BR Derby Works. This appearing to be repeated in all subsequent published disposal listings. The last confirmed observation of the locomotive appears to have been on 19th May 1968 when it was observed at Derby shed on a RCTS visit to the adjacent works (p.248 7/68 RO).  An appeal for information about the disposal of D3121 was made in the RO (p.117 4/71).  This resulted in the RO subsequently recording that D3121 was still present at Derby depot on 26th May 1968 but was no longer present on 11th August 1968 (p.281 8/72). It should be noted that no sighting of it actually being at Derby Works at the time has been found, D3121 always being reported at the depot.

Interestingly though the What Really Happened to Steam project have discovered a BR document dated 8th May 1968 which lists D3121 along with 15003 being sold from Derby MP Depot to R. E. Trem & Company and requesting delivery to be made to the Slag Reduction Company, Holmes Sidings, Rotherham.

The RO (p.350 10/68) recorded that 15003 was present in the Ickles, Rotherham yard of Slag Reduction on 24th July 1968.  This being confirmed by local Enthusiast Adrian Booth who observed 15003 at Ickles several times between 16th July and 9th November 1968.   It is of note though that neither the RO mentioned, or Adrian recorded, D3121 being present at Ickles.

Although the evidence suggests D3121 could have been scrapped at Ickles between 26th May and 16th July 1968 rather than Derby Works there are no observations to support this.

Analysis by John Hall of the various references to the disposal of the locomotives mentioned in the opening paragraph in the RO and elsewhere generally quotes a date last noted, followed by a date not present, with an assumption that the locomotive was scrapped at Derby Works between the two dates. It is possible that did happen but certainly not with ED2. The dates of last observation and first recorded date when not present at Derby Works so far established are shown below.

Mass scraping of steam locomotives appears to have ceased at Derby Works towards the end of 1963 with a few others also reportedly dealt with in early 1964. Other than those mentioned above no scrapping of diesel locomotives is recorded as having taken place until August 1976 after which a significant number of locomotives were dealt with. It is though considered possible that the first locomotive to be dealt with after the lull was 3020. One exception to this was the original body shell of D5025 which had been completely stripped in the works. See D5005 / D5025 identity swap- Clearly then if this locomotive had been completely stripped for components then D5383 may have suffered a similar fate but this seems unlikely. Both being drawn from main line classes with a long term future at the time.

Further information is sort regarding the disposal or otherwise of the locomotives listed and also any visit reports for Derby Works that narrow down the date of scraping or departure from Derby Works of the highlighted locomotives.