Roberto Cocchi has very kindly given permission for his two photographs taken at Albate Camerlata in 1974 of the former BR Class 10 to be reproduced here.  Can anyone help identify this locomotive or provide any information that would help identify it?

The appearance of the above pictures of a former BR Class 10 on an Italian website opened up a very large can of worms.
The pictures were taken in 1974 at Albate Camerlata and show the locomotive in use with Attilio Rossi. In addition two further picture of what is almost certainly the same locomotive have emerged. See 13xxx - D3xxx The first was taken the previous June (see below), whilst the second was believed to have been taken in 1990 when the locomotive was in use at San Martino della Battaglia.
The first problem is that no locomotive of this description is recorded as going to Italy in any of the disposal books and all of those withdrawn before mid 1973 appear accounted for so which locomotive is it?

The only ex-BR locomotive recorded with Attilio Rossi at the time in any of the disposal books is D2232. This though is is clearly an error for D2231. Photographic evidence exists of D2232 awaiting entry into the scrap yard of G. Cohen, South Bank, Middlesbrough and there is no reason to believe that it wasn't scrapped at that yard..

R. E. Trem & Company were a company with non rail connected workshops in Finningley near Doncaster and may also have used third-party sidings in the Doncaster area. Their main business was the exporting of engines, but they were also involved in the overhaul of locomotives for re-sale and the re-sale of components. The majority of locomotives acquired were though consigned to a third-party scrap yard for engine removal and scrapping of what then remained or in some cases storage prior to re-sale.

D2231 was sold to R. E Trem & Company, Finningley in 1969 from Derby. It was observed at Derby Etches Park on 27th March 1970. It then moved to the Chesterfield yard of Steelbreaking & Dismantling which was one of the R. E. Trem third-party yards. It was last observed their on 14th June 1970. Exactly what then happened to it is unclear but it is believed to have been exported to Attilio Rossi, Rome, Italy soon after that. In 1973 it was observed at Lissone and was positively identified by its works plate that was still carried.

With R. E. Trem & Company being involved with D2231 it is probable that they were also involved with the mystery Class 10 locomotive as well.

This Italian company was involved in railway infrastructure works with its headquarters in Rome. As well as owning various on-track machines, plant and wagons they had a number of second hand locomotives. It appears Impresa Attilio Rossi later became GEFER - Rossi Group working alongside GCF Generale Construzione Ferroviarrie SpA. GCF being the parent company to GEFER and was founded by Luigi Rossi.

What could the Class 10 be? 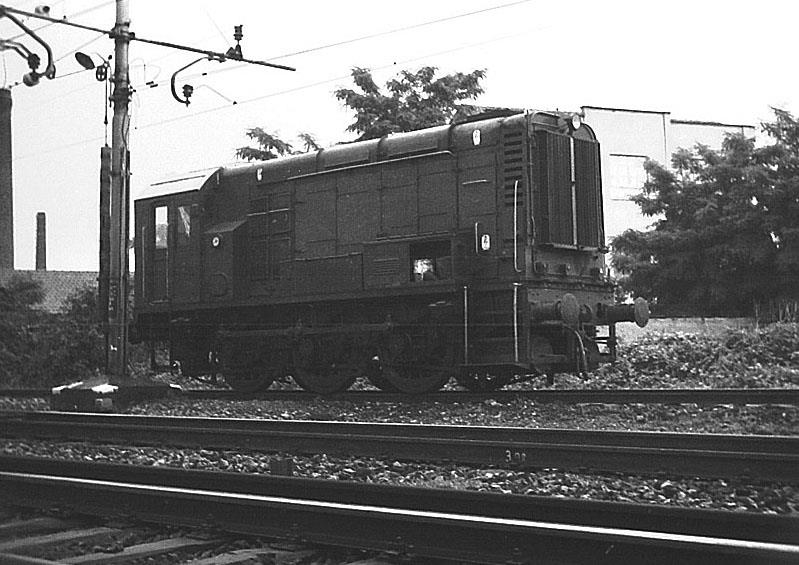 The mystery Class 10 was photographed at Lissone, Lombardy, Italy on 29th June 1973. It was then owned by Attilio Rossi and used for shunting track materials in connection with the relaying of the Milano to Como line.   Alberto Perego

In the view of Richard Day, detail features suggest that the mystery locomotive is one of 3137-3145/3152-3166. This is further supported by Alberto Perego who observed it carrying a Darlington builders plate in 1973. Analysis by Rob Aston has also come up with the same conclusion. Similarly David Gregory has come to the same conclusion but has narrowed it down to 3137-3145/3152-3158. Thus two lines of enquiry need to be explored but both result in more worms coming out of the can. The first line of enquiry is based on the pictured locomotive. or possibly another, having arriving in Italy as early as 1969 if not before. The second line of enquiry is based on the pictured locomotive having arrived in Italy around 1972 or slightly earlier. It is though important to try and avoid the 'Wearside Jack' trap and put too much reliance on one piece of information that subsequently proves to be false or distorted.

The clue for the 1969 scenario can be found on page 120 of the April 1970 Railway Observer where it says "During July, 1969 an ex-BR, 350 hp diesel-shunter was noted working at Imperia, Northern Italy. Unfortunately, no numbers were seen but the builders plate (Derby 1959) was clearly seen. The rear of the cab still contained the yellow/black strips of B.R.". The' (Derby 1959)' has though to be wrong as no Derby built locomotives in that year had been withdrawn by then. However, if '(Derby 1959)' was an error for '(Derby 1955)' a possible candidate is D3193. This was withdrawn in September 1967 whilst allocated to Shrewsbury. Although it is often stated that this was due to collision damage no evidence to support this has emerged. If it was not damaged then why was it withdrawn five years in advance of any other Class 08.  On 3rd June 1967 an enthusiast passing through ShrewsburyI recorded D3193 and says that "In all probability D3193 was seen at the station or Coton Hill Yard north of the station and was operative".  On 26th August 1967 it was seen in the New repair shop at Derby Works, but had disappeared by 8th October 1967 and has never been seen subsequently. So what actually happened to it? Could it have been it was withdrawn for export to Italy? Has anyone pictures of D3193 taken c1967? Further details can be found at Derby Works Scrappings.  It is also worth mentioning that D3117, also Derby 1955 built, disappeared from Derby Works at the same time as D3193.  Although reportedly scrapped at J. Cashmore, Great Bridge some doubt exists as to whether this is correct.  Further details can be found at What actually happened to D5383? (and other J. Cashmore anomalies)

Of these, 3165 has been highlighted by John Hall as being suspicous. The last traced observation of 3165 was at Colwick on 20/09/1967 (p.410 12/67 RO) but it was not recorded on a subsequent visit on 02/02/1968 (p.118 4/68 RO). Although 3165 is recorded as having been scrapped at C. F. Booth, Rotherham by 23/04/68 (p.207 6/68 RO) it is the only locomotive listed as scrapped their at the time that was not actually observed. Thus, any observations of 3165 after 20/09/1967 are keenly sought. Similarly, Richard Day has suspicions about the disposal of 3144. This was officially withdrawn from Thornaby on 07/07/1969 and was observed there by Philip Cartwight on 29 August 1969.  No other information or observations about it are known to have appeared at the time. Interestingly 'Pronounced Life Extinct' records its disposal as G. Cohen, Kettering but no evidence supporting this has been traced. However, after the book was published the RO recorded its disposal as being to Hughes Bolckow, Blyth during October 1969 (p.155 5/76 RO). This being the disposal given in subsequent publications. Any observations of this locomotive in August 1969 or later would be thus of great interest. It is also interesting to note that although 3140 & 3142 have been consistently recorded as being consigned to C. F. Booth, Rotherham in March 1969 (p.369 11/77 RO) no sightings of them there have been traced. Thus, any observations of these in 1969 would also be of particular interest. Pictures of 3137-3145/3152-3166 and 3140/2/4 & 3165 in particular in their latter days of British Rail service may though hold a clue.

If it was indeed exported in 1972 then it has to be one of those not mentioned above, 3137, 3138, 3141, 3143 & 3145. Of these John Hall has identified 3137 and 3141 of particular concern. 3137 was noted in the Doncaster Yard of C. F. Booth on 21st November 1970 but not subsequently. Although it could well have been scrapped there it is quite possible it was just there awaiting onward movement. The yard not being associated with locomotive scrapping at the time. Comparison of the Italian photographs by David Gregory with one of 3137 believed to be taken in 1969 comes up with an almost exact match where details that could vary slightly between individual locomotives can be checked, but also some distinct detail differences. 3141 was last reported at Thornaby on 4/12/71 (p.65 2/72 RO). Although all disposal listings record it as being scrapped at C. F. Booth, Rotherham no sightings or other evidence have been traced confirming this. Thus, any observations made of these locomotives after the above date would be very much welcomed. Again, pictures of these locomotives in their latter days of BR service would also be welcomed.

Interestingly, when last reported at Thornaby, 3141 was in the company of 2070, which subsequently moved to Queenborough. Could it be that both left at the same time and headed for the same destination.

The full picture of what became of the ex-BR, diesel-shunting locomotives in Italy is far from complete. Generally speaking those that went to the Brescia area are reasonably well documented, those to the Trieste area and to Attilio Rossi in the Rome area are very poorly documented whilst information about thos exported via Cairnryan is almost none existent. Thus, if anyone has further information about these locomotives or has attempted to seek them out on a visit to Italy could they please contact Peter Hall  Several other worms are squirming around these locomotives.

I fear more worms are going to escape from this can before the lid can be put back on and those that have already escaped are going to prove difficult to catch and put back in but somebody holds that vital clue!

Further information about the two locomotives, including observations, can be found by clicking on the individual locomotive number below. It should be noted that in some cases this contradicts what may have been published elsewhere. Thus the need to compile as much information as is possible about these locomotives.