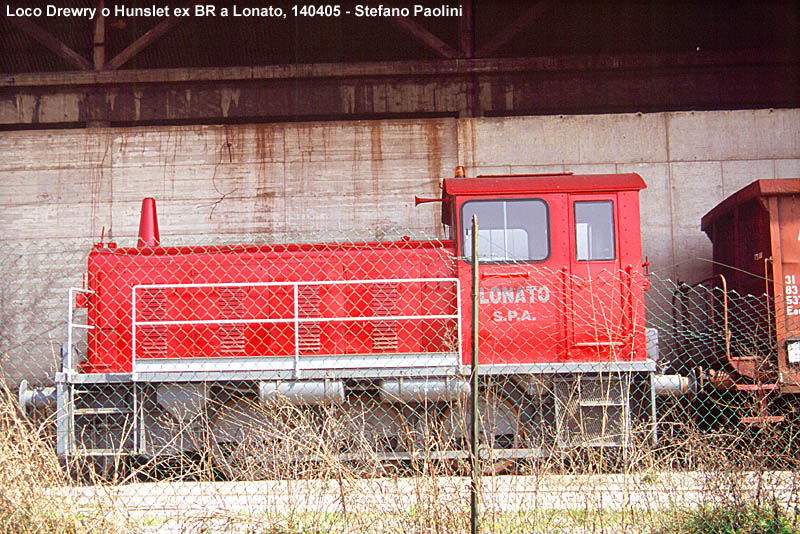 When this dilemma was started in 2009 the only Ex BR Diesel Shunting Locomotive believed to be still extant in Italy was Class 04 D2289. It is pictured, freshly re-painted, at Lonato Steel works, Lonato, Brescia, Italy on 14th April 2005.   Stefano Paolini

The subject of BR design shunting locomotives exported to Italy is a classic example of authors repeating what has been published before, despite it clearly containing anomalies. Many hours have been spent in recent years by many people trying to unravel this dilemma and as a result a completely different picture is emerging to that previously published.

Precisely how many locomotives were exported from 1971 onwards is far from clear. It is though believed that at least fifteen BR Class 03, Class 04, Class 06 and Class 07 locomotives were involved. The actual figure may be as high as twenty. Although some information is known about the locomotives Italian histories, in many cases the information is rather sketchy. In an attempt to build up a better picture of the Italian history of these locomotives you are invited to submit any observations or photographs of them you may have made whilst visiting Italy. In addition any sightings in Great Britain after condemnation would also be welcomed. We also seek observations of D2289 throughout its life in order to help the instigators of its repatriation to compile its fuller history.

It was thought that in recent years only one Ex BR survived in Italy, this being D2289 at Lonato. However in October 2014 Wim Roost from the Netherlands notified us of the photograph below. It is believed it could have been taken as recently as 2013 and it is now known that the locomotive was still present in July 2020. Delving into Google earth images has revealed that this locomotive was present in 2006 and possibly before. Very careful examination of a set of pictures of the locomotive taken in 2015 with earlier picture of those believed exported to Italy have concluded that it is almost certainly D2156 – 03156. This though has been recorded as scrapped c1984 so if it does prove to be D2156 – 03156 that where has it been since?

Any further information, photographs or observations regarding this plinthed Class 03 would be most welcomed.

During 2018 two became one again. In the Spring of that year a project was launched to repatriate D2289. This proved extremely successful and within a matter of weeks the locomotive was on its way home. On 13th June 2018 it was craned off the lorry that had brought it from Italy at its new home, the Heritage Shunters Trust based at Rowsley, Derbyshire. 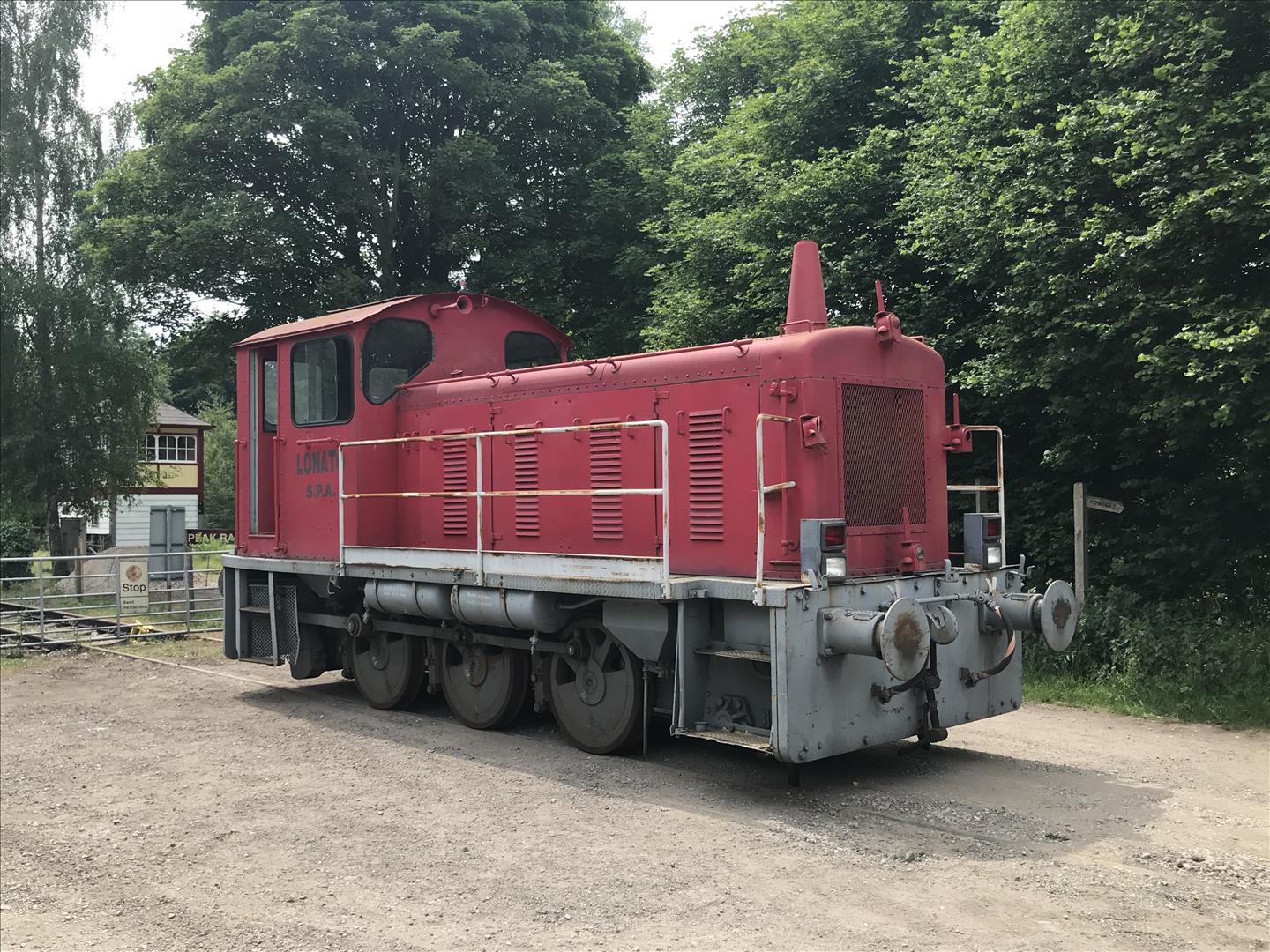 Back home! After a sojourn in Italy of forty-six years D2289 was repatriated during June 2018. It is pictured shortly after arrival at the Heritage Shunters Trust base at Rowsley on 13th June 2018 shortly after being unloaded from the low-loader that had brought it from Italy. Â  Mark Jones

R. E. Trem & Company were a company with non rail connected workshops in Finnigley near Doncaster and may also have used third-party sidings in the Doncaster area. Their main business was the exporting of engines, but they were also involved in the overhaul of locomotives for re-sale and the re-sale of components. The majority of locomotives acquired were though consigned to a third-party scrap yard for engine removal and scrapping of what then remained or in some cases storage prior to re-sale.

Although the majority of locomotives re-sold subsequently saw use in Great Britain the company does appear to have been involved with exports to Italy and Guinea.

Shipbreaking (Queenborough) and its involvement

It is important to understand the involvement Shipbreaking (Queenborough) had with ex BR diesel locomotives. Also the history of rail and scrap activity in Rushenden and Queenborough on the Isle of Sheppey.

It is known that in the 1950s the industrial railway in Rushenden was operated by Settle Speakman and Company and served a number of other company premises and wharves. During the early 1960s coal traffic dwindled and the Washer Wharf and associated sidings were used by Lacmots of Sheerness for ship breaking and later the breaking of steam locomotives and other railway rolling stock. It would appear that the rail operations were taken over by Shipbreaking (Queenborough) in the mid 1960s. The company also taking over from Lacmots as the company breaking up ships and railway rolling stock. Settle Speakman & Company and Lacmots used F. C. Hibberd built diesel locomotives and these appear to have been acquired by Shipbreaking (Queenborough) when they took over operations. These being progressively replaced over the following years. In September 1967 R. E. Trem & Company acquired D2726 from BR at Wolverton Works and requested it be delivered to Shipbreaking (Queenborough). This locomotive was presumably then used for shunting railway rolling stock that arrived for scrapping as well as other duties. It was followed by D2432 in May 1969, also acquired via R. E. Trem, for presumably the same purpose.

No further ex BR locomotives are recorded as arriving until September 1971. Then, D2249 & D2282 are recorded as arriving from Colchester and D2726 is recorded as being scrapped soon after. At about this time Shipbreaking (Queenborough) appears to have developed connections with the Italian steel industry. As a result a steel rolling mill was constructed on the site in addition to continuing with the other activities. This Italian connection is probably very significant in explaining why the majority of locomotives passing to Queenborough subsequently were exported to Italy and then saw use in the Italian steel industry.

It is very important to understand which locomotives went to Queenborough from August 1971 onwards and what exactly happened to them. Clearly what has been published is only part of the story so observations, notes and photographs from that period could prove of great importance. Very few reports have so far been traced. The most widely used being from the RO (p.437 12/72) which quotes information provided by Shipbreaking (Queenborough) on a visit made on 22nd October 1972. That said “Twenty-five locomotives had been, or were being, purchased from B.R. for export to Italy. Thirteen had already gone by that date (in batches of five, five and three), being shipped from Sheerness Docks after preparation at Queenborough depot”. The originator of this report has been traced so no doubts whatsoever as to its authenticity.

This does though not tie in with regard to what has been published over the years as only a possible eight former BR locomotives have been quoted as being despatched by that date, these being D2019, D2032, D2033, D2036, D2216, D2242, D2289 and D2295. However, it is now suspected that others that have subsequently been recorded as scrapped in England by this date, had in fact already been exported. Their disposals having been fabricated by the infamous ‘Zulu’ and endlessly repeated despite no other collaborating information ever emerging. Further reading about this is available at What Really Happened to Steam project (WRHTS). Another suggestion is that some of the locomotives exported were not of BR origins. At least two of the locomotives used by Settle, Speakman & Company, FH 3944/1960 and FH 3986/1962, are known to have gone to Italy at about this time. However, the originator of the above report specifically recorded in his notes that these had been exported in addition to the thirteen BR locomotives prior to his visit.

D2242 is particularly intriguing as only one observation of it at Queenborough has so far emerged (this not until 2020). However,  on page 200 of the June 1974 RO it states ‘A visitor to Queenborough on 22nd October 1972 was shown a worksplate (Drewry 2572) and was informed that it was off one of the locomotives which had gone to Italy. On checking it was found that the plate was from D2242 which was sold to C. F. Booth, Rotherham in 1970’. Again the source of this report has been traced and there is no doubts about its authenticity, yet the significance of this has been overlooked by compilers of various disposal books. . It is now known that the majority, if not all, locomotives passing to C. F. Booth at the time had actually been purchased by R. E. Trem & Company who then requested that they be consigned to C. F. Booth. D2242 was such a locomotive.  Although the majority were then scrapped by C. F. Booth it appears this was not always the case with some being kept at the yard prior to movement and further use elsewhere. Adrian Booth was a regular visitor to C. F. Booth at the time, his earliest observation of D2242 was on 13th June 1970.  Adrian last observed D2242 on 21st August 1971. It is now clear that it was sold on after languishing at Rotherham and not scrapped as recorded in the various disposal books.  It moving to Queenborough from where it was subsequently exported to Italy in cMay 1972.  Clearly then, any actual sightings of D2242 after 21st August 1971 could prove to be extremely important.  Curiously, the late Alan Sugden quotes the disposal of D2242 in the first two editions of his book ‘Diesel & Electric Loco Register’ to be P. Wood, Queenborough!  What was the reason for Alan not recording D2242 as being scrapped at C. F. Booth, Rotherham as was the case with all other disposal books, the RO reference or some other information?  Very significantly though this indicates a possible link between the exported locomotives and R. E. Trem & Company and it is thus probable that all were initially bought from BR by them before being consigned to Queenborough or Stranraer for onward movement to Cairnryan as was the case with those exported in 1976.

In addition to only one sighting of D2242 at Queenborough there are none of  D2033 & D2289 and only one of  D2295. This supports the possibility of others passing through and not being observed.

IRS Bulletin 206 of October 1976 reports that “Feralpi at Lonato has ex BR D2294 and another Drewry 0-6-0D 3 PHOENIX”. PHOENIX is still present and has been identified as Bg3601/DC2726 1964 that arrived in 1974 from Harlaxton Quarries, Northamptonshire see here. The originator of that report has checked the notes made at the time and says he noted that the coupling rods of the ex BR Drewry Shunter, said to be ex BR D2294, were stamped 11212 & 2242. As D2294 remained at Queenborough it is concluded that the Class 04 must have been D2242.

Shipbreaking (Queenborough) Ltd had operated a port side scrap yard at Cairnryan since 1967. This yard was mainly involved with the scrapping of naval shipping and had lost its rail connection in the very early 1960s.  In May 1976, 03010, 03098, 03153 and 03156 that had been stored at Thornaby depot after condemnation are recorded as moving to Stranraer by rail. It is presumed that they were then moved to Cairnyan by road and it was from there that they were exported. However, a visitor to the yard that September was told only three had been exported so it is possible one of these was actually scrapped at Cairnryan.

Brief details of what is known about the post BR history of the locomotives believed exported to Italy, along with any sightings submitted, can be found by clicking on the individual locomotive number below.  Further observations should be submitted to Peter Hall along with any other information and comments.