The aim of this dilemma is to clarify at which of the Birds Group scrap yards Class 03 D2185 was actually located and scrapped. Most disposal books record D2185 as being scrapped at Birds Group Long Marston yard in 1978. This could be correct but did anyone ever see or photograph this locomotive at Long Marston in 1978? So far nothing to confirm that it was there then has been found. The alternative possibility was that D2185 was actually scrapped at Birds Group Cardiff yard where it had been located since at least the Summer of 1972 and possibly earlier. However, research suggests that what has previously appeared in print about this and other Ex BR shunting locomotives that have passed through, or are recorded as having past through, Birds Group yards might not be totally correct.

Bird Group appear to have been concentrating on carriage and wagon disposals at this time. It would appear that the seventeen locomotives acquired from this cull were intended for use in their yards or as a source of spares to support those used. Scrapping taking place once they had no further use for the locomotives.

It has now been established Birds Group have actually had two different yards in Cardiff since the mid 1960s. The first, which was were the Ex BR locomotives were used, was to the east of the main Cardiff Docks complex, between Splott and what was Pengam Farm. This closed in the Autumn of 1977 and was most commonly referred to as 40 Acre site.

The following notes might help with regard to the location and surrounding area.

On the North East of the Pengam Farm site was built the Tremorfa Works. Here the coast is on a North East-South West alignment. To the South West of the Pengam Farm site was the Dowlais steel works which had many buildings and tracks along with other firms. The road running parallel with the coast and to the North of the works sites and into the docks is Rover Way. To the West of the steelworks were the railway tracks and siding in a North-South alignment, the junction being near Roath. Roath Dock was to the west of these railway lines with the lines splitting to both sides of the dock and Queen Alexander dock slightly further South and West. Bute Dock was to the North West of Roath Dock on an almost North-South alignment.

The replacement Bird Group yard which opened in the Autumn of 1977 was to the North of Tremorfa Works, next to Rover Way, This is now Sims Metals, Birds Having sold this part of the scrap metal work to Sims.

The yards though appear to have been described in numerous different ways in enthusiast publications over the years which has created much confusion. Examples of how they have been referred being Roath Dock, Tremorfa Works, 40 Acre Site and Rover Way. Ideally we would like to include a map of the area here with the location of the yards clearly marked. If anyone could provide such a map could they please make contact. Alternatively, can anyone give an accurate OS grid reference for the two yards. 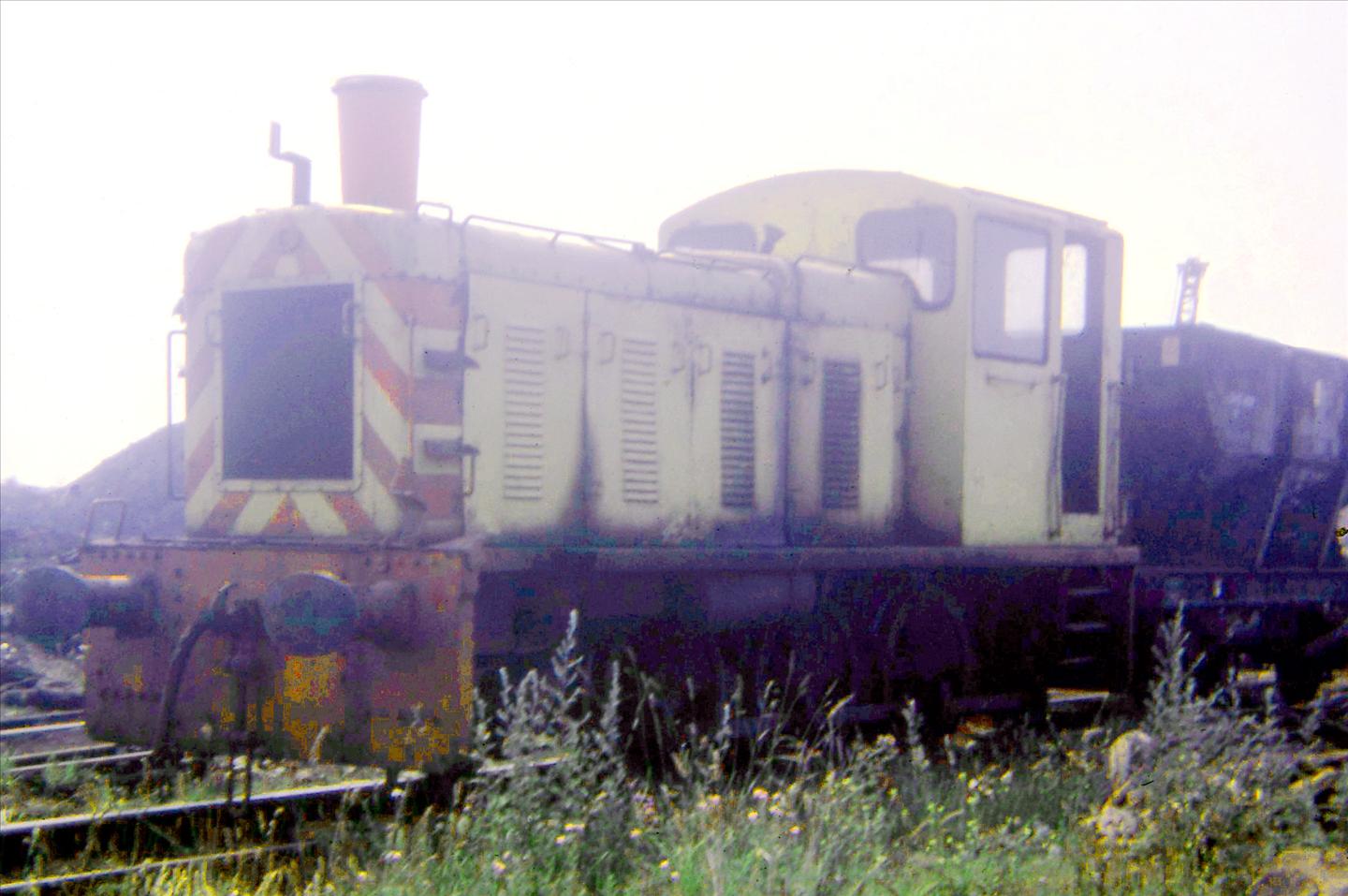 The first Ex BR locomotives reported to have arrived were D2736 & D2757 in February 1968. These are reported to have been scrapped in July 1969 and October 1970 respectively. However, with regard to D2757 it would appear that this survived for at least a further year (see below). The next reported arrival was D2125 in May 1969, this has been recorded as scrapped in June 1976. In April 1970 D2123 reportedly arrived from Long Marston but departed to Derby Power Station that November. It being stated that this had been converted to a mobile generator and was presumably not self propelled. It would then appear that the next arrival was D2185 from Abercarn Tinplate Works. The earliest reported sighting being on 16th July 1972. Both D2125 and D2185 were used subsequently in the yard. 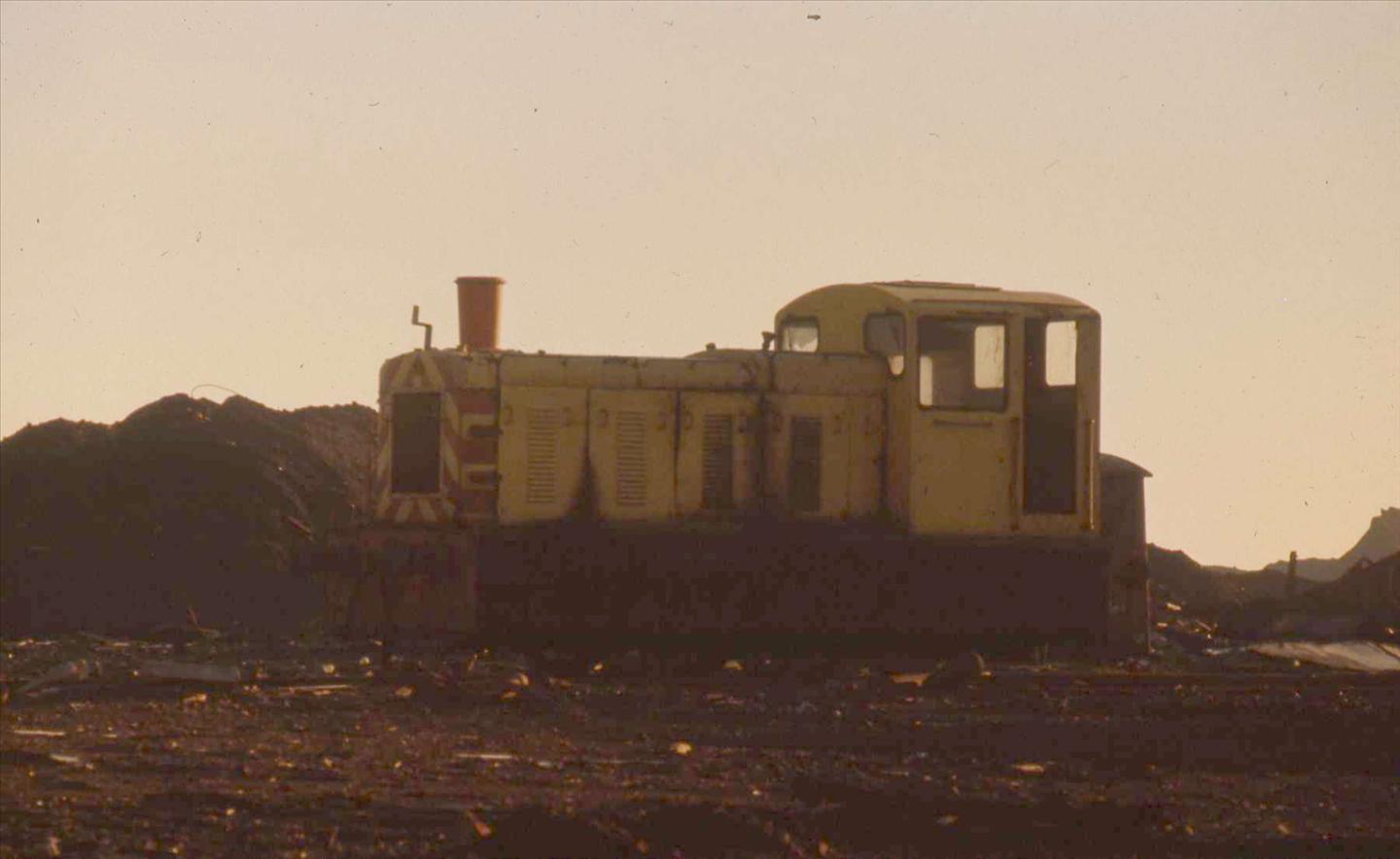 D2185 was withdrawn from Worcester in December 1968. It remained there until May 1969 when it moved to Birds Group, Long Marston, Worcestershire. Several reports of it were published in the RO at Long Marston, the final one on 7th March 1970 (p.156 5/70 RO), so its history until then appears quite clear. Subsequently it was observed to still be present by Gordon Edgar and Mike Kennard on 30th March 1970. The next traced observation of it is at Abercarn Tinplate Works on 9th October 1971. It has been recorded as arriving there in April 1970 but nothing to confirm that has yet emerged. Further sightings of D2185 at Abercarn would be very much welcomed. 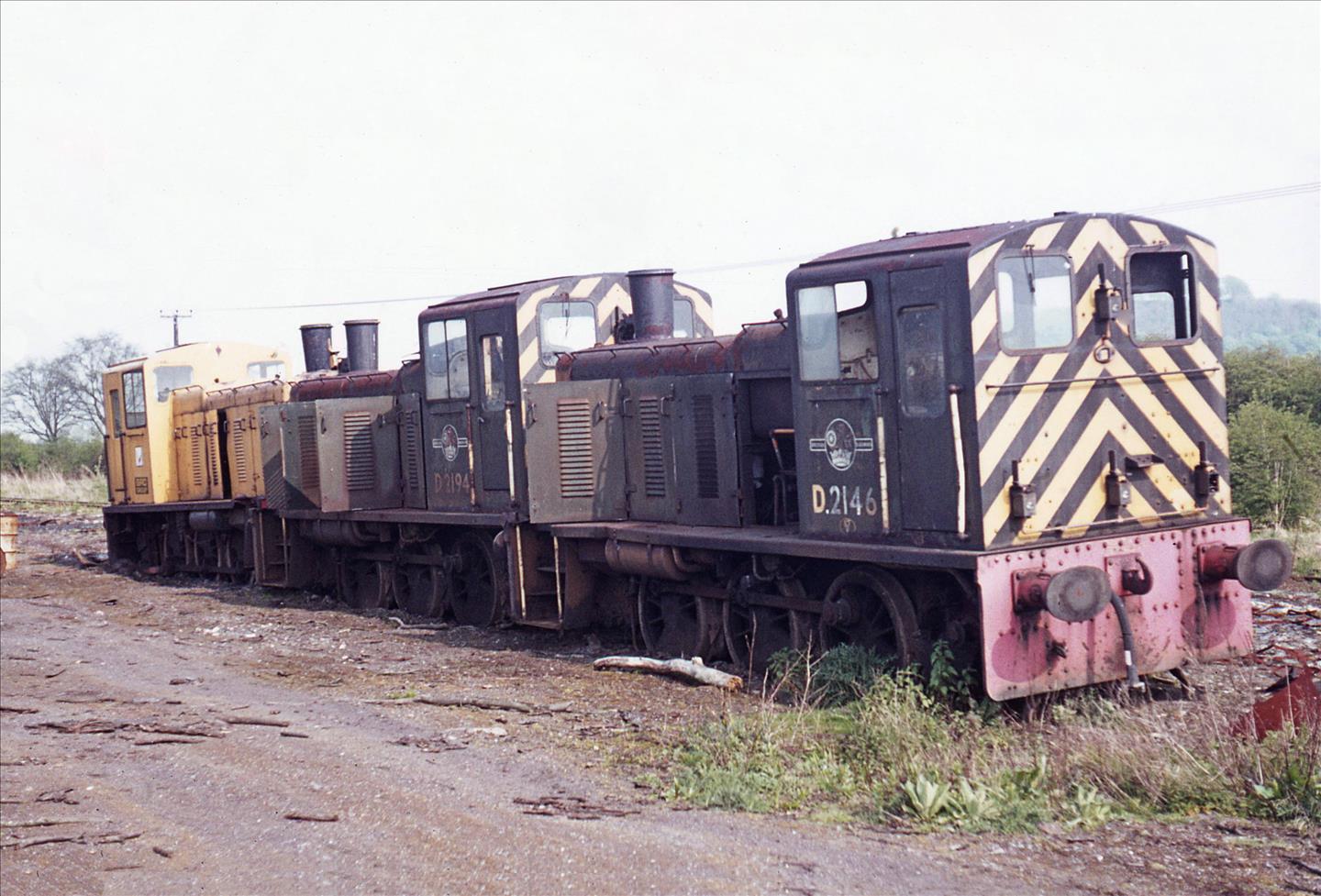 Although D2185 is widely recorded as having moved from Cardiff to Long Marston in January 1978 where it was reputedly scrapped six months later no observations have been found to substantiate that it was ever at Long Marston. At the time various other Class 03s were being scrapped at Long Marston including D2146, D2187, D2188 and D2194 which had been present for many years. Is it possible that one of these was wrongly reported as D2185? It is worth noting that both D2185 and D2187 were by then in a yellow livery without numbers whilst D2146, D2188 and D2194 retained BR green livery with numbers. If so, then it is possible that D2187 was taken to be D2185 and whilst D2187 was certainly scrapped at Long Marston it could be that D2185 was scrapped at Cardiff rather than Long Marston. 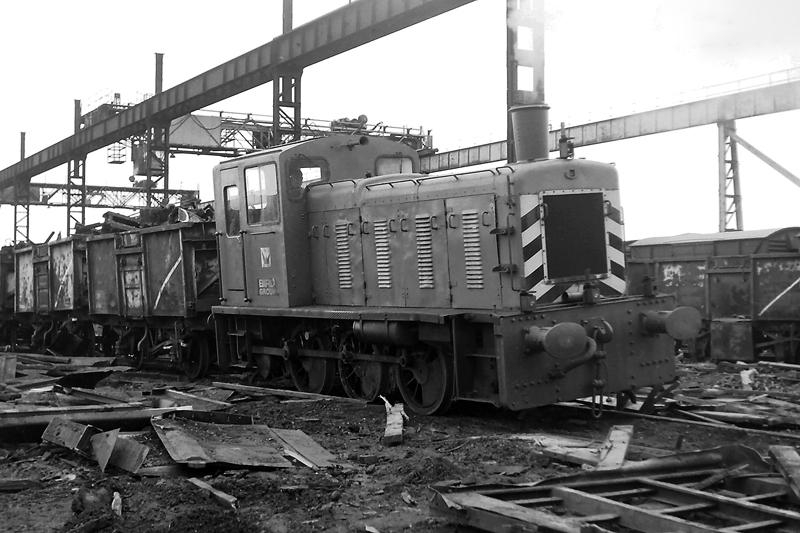 Pictured and seeing use in what is believed to be Birds Group Cardiff yard is an Ex BR Class 03. This is thought to be D2125 but that is not certain. The photograph appears to have been taken in late summer or autumn 1971. Any help in confirming the location or identity of the locomotive would be welcomed. David J. Smith collection David J Smith collection 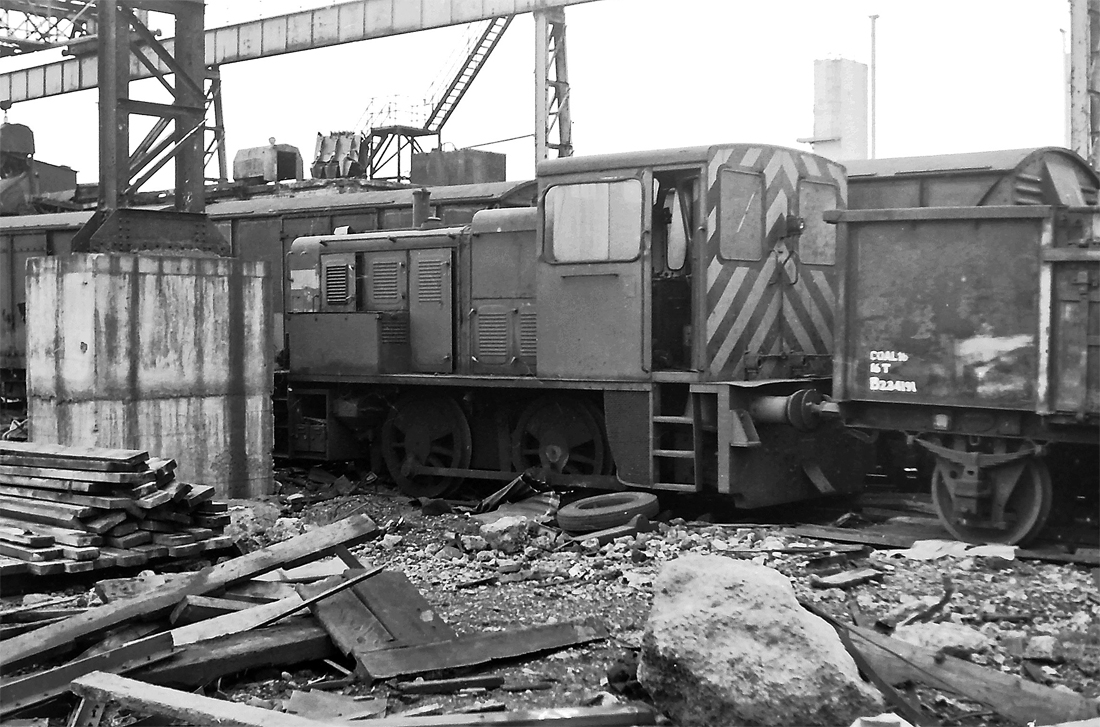 Pictured in what is believed to be Birds Group Cardiff yard is an Ex BR North British design 0-4-0. The identity of the locomotive is not known but D2757 would appear most likely even though that is recorded as having being scrapped prior the photograph having been taken, this being late summer or autumn 1971. Any help in confirming the location or identity of the locomotive would be welcomed. David J. Smith

Society member John Hall, who is doing extensive research into BR diesel locomotive disposals, came across the picture left of a Class 03 that is almost certainly D2125. This picture appears elsewhere on the internet but David. J. Smith, in whose collection it is now held, has given permission for its use here.

Even though the Class 03 was photographed from the opposite side to the other photographs of D2185, detailed examination reveals significant detail differences. Thus, it is concluded the locomotive can’t be D2185. As to the date of the photograph, this is not known but is believed to be late summer or early Autumn 1971. David says “The shot of the 03 is on a strip of 6 35mm negatives, the previous shot being of “Warship” 856 at Swindon Works during a visit on the 14th August 1971″. It is hoped that the background to the picture will allow confirmation of the location. David also says “The next shot on the strip (after the D27xx one – only that one and the 03 are from the scrapyard) is at Cardiff Canton depot, so that confirms a South Wales location”.

The second picture right now throws more ‘oil on troubled waters’! This shows what is believed to be one of the later built former BR North British 0-4-0 at the same location. D2757 was recorded as going to Birds Cardiff yard but as having been scrapped in October 1970. If it is indeed that locomotive then scrapping must have taken place much later or if it is not that one which one is it?

If you can confirm the location of these photographs or can add anything else that might help solve this dilemma please make contact.

With regard to D2186 it has to concluded that this was never a Birds Group locomotive despite what is often reported. It was actually sold to A. R. Adams & Son, Newport in the Spring of 1970 or possibly earlier (see below) for use as a hire locomotive. References to it ever being at Abercarn Tinplate Works or Birds Group, Cardiff have been concluded to be presumptions based on previously published presumptions. It never ever being located at these locations. Its only known hires being to Aberaman Colliery Washery and Tower Colliery. From September 1972 it seems to have been stored at A. R. Adams premises in Newport until being scrapped in 1981.

Further details about D2186 can be found here

Known sightings of D2185 when owned by Birds Group are listed below. Please forward any additional sightings to Peter Hall