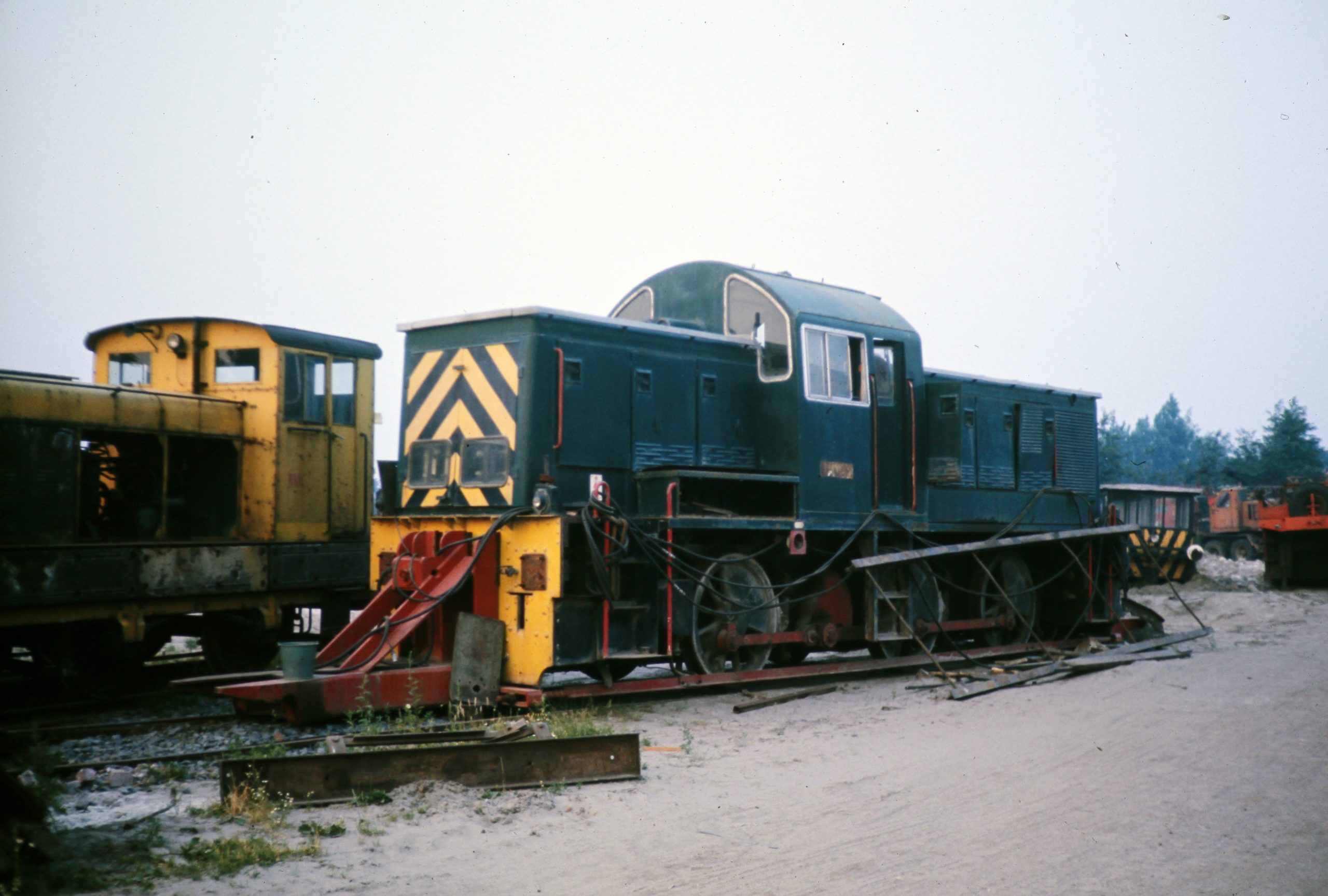 The most recent known picture of D9534 is this one taken at SA Sobermai, Maldegem, near Bruges, Belgium on the 27th June 1976. Its condition suggests that rather than being overhauled for export to Italy as widely recorded it had actually been used as a source of spares in the overhaul of D9505. JM Tolson/The Transport Treasury

This locomotive saw industrial service at APCM, Hope, Derbyshire, along with D9505, from September 1968 until May 1975.

On 5th May 1975 both departed Hope by rail for Harwich where they have been reported as arriving on 10th July. This though is contrary to a report from the Ipswich Transport Society that D9505 and D9534 were towed through Ipswich by 37044 on 10th May as 9X35 on their way to Harwich. This does though suggest that they may have spent a short time elsewhere, possibly Whitemoor Yard where they were photographed. Perhaps they also spent time at Harwich after arrival which explains the 10th July date. Any sightings during this period would be welcomed.  D9534 was transported by sea from Harwich to Belguim. Moved to SA Sobemai, Maldegem, near Bruges, Belgium where it was overhauled before being sold on.

A report submitted to the IRS about a visit to SA Sobemai on 1st May 1976 states for this locomotive “being overhauled, SOLD to Italy”. It is presumed this information then appeared in an IRS Bulletin or elsewhere but as yet the place of publication has not been identified. It being shown as such in ‘Locomotive Directory (D. C. Strickland)‘ published in 1983.

By 1987 the IRS in ‘3BRD’ were recording it as “sold to an industrial user near Milan, Italy”.  Interestingly, as a result of enquiries made in 2018,  we were told by SA Sobemai, that D9534 went to a terminal to shunt Ambrogio Transporti S.P.A. wagons, although its not clear that was who it was sold to.  Reggio Emilia was mentioned as the location  but no reference to Ambrogio having an involvement there has so far emerged.  Ambrogio do have a site at Gallarate, Lombardy which is roughly 25 miles north west of Milan, but this appears not to have opened until 1984.  They also have a site at Candiolo, on the outskirts of Turin. Subsequent enquiries were made with Ambrogio Transporti S.P.A. who stated they had never owned the locomotive.

Italian Board of Trade documents documents seen by those researching this topic indicate that during 1976 & 1977 no locomotives were imported from any Benelux companies. However, these documents indicate that during 1976 a 50 ton locomotive was imported from and also exported back to Switzerland.   Could it be this was D9534 with a Swiss company acting as intermediary? That being the case, the locomotives stay in Italy was short lived and perhaps it subsequently saw use in Switzerland or was exported elsewhere from there or returned to Italy later.

By 2000 the IRS in ‘5BRD’ were recording it as “working at a steelworks in the Brescia area by May 1997”. This suggests that if it was originally at Gallarate or Candiolo it had been sold on and left there by 1997. Intriguingly the IRS in ‘6BRD’ add “extant June 2003” and in ‘7BRD’ “scrapped October 2005”. These references suggest someone knew were it was located between 1997 and 2005 and was keeping tabs on it. If that was you or you know who that was please could you make contact.  It should be noted though that the locomotive is not listed in Deutsche Lokomotiven in Italien by Frank Glaubitz and Micheal Ulbricht published in 2003 and the authors, despite having extensive knowledge of industrial railway sites in Italy have no knowledge of the locomotive what so ever. Similarly, no British enthusiast that has made contact and has visited Italy searching for Ex BR Diesel Shunting Locomotives Exported to Italy has ever reported seeing or knowing anything about the whereabouts of this locomotive.

However, an alternative and more credible explanation as to why no substantiated information about D9534 has emerged is that it would appear extremely likely that it was scrapped in Belgium in 1976.  In 2020 the RCTS was alerted to the above photograph held in the Transport Treasury archive.  It was taken two months after the IRS reference to D9534 being overhauled and exported to Italy is dated.  Perhaps that was the intention then, but two months later the locomotive looks rather derelict and mounted in some sort of cradle suggesting it was about to depart.  Lack of any subsequent substantiated sighting after 27th June 1976 and the condition it was then in does point to D9534 having been scrapped in Belgium soon after this photograph was taken.