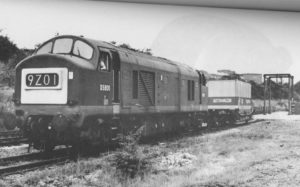 D5901 is pictured propelling the “Auto Wagon” into the “Transfer” frame erected on the Mickleover Test Track. The picture was taken in 1971. Derek Jackson collection

Arrived at the Railway Technical Centre (RTC), Derby in late Summer 1969 from Finsbury Park.  From sightings submitted it would appear it remained there until the following Autumn.

Probably in late 1970, D5901 was transferred to the Electrical Engineering section, for use initially to carry out “Manual Speed Datum” trials, where the driver would select a vehicle speed rather than engine power and the control system would automatically accelerate to and maintain that speed. Braking to a lower speed would be assisted by regenerative braking. The Mickleover test track from Derby Friargate to Eggington Junction was used for the trials.

In 1971 the control system design was modified for a project called “Auto Wagon” which was to enable “Self-Powered” freight containers vehicles to be automatically routed to and from private sidings and automatically load or offload containers using a hydraulically powered “Transfer” frame. A project 25 years ahead of it’s time which was successfully demonstrated to the British Rail Board at Mickleover and was featured on “Tomorrow’s World” by Raymond Baxter!

Since neither time nor finance was available to design and produce the self-powered vehicle, D5901 was used as the power which was connected to a container flat vehicle via a safety match wagon. A siding was constructed on the Mickleover test site where an automatic transfer frame was designed and erected to load or offload a container on to the flat vehicle. The simulated self-powered container vehicle collected a container, then automatically accelerated out of the siding towards Eggington junction under the control of track to train transducers. Here it stopped and returned towards the siding at 40kph slowing down to 16kph before turning into the siding.  Once on the siding it automatically slowed to 8kph under partial power and brake control then to 0.8kph for the final 25 metres, power removed at the response of the trackside transducer and the whole vehicle stopped directly under the transfer frame where the container was lifted off the flat automatically.

The lack of any Derby sightings between August 1970 and March 1972 suggests D5901 was based at Mickleover throughout that period in connection with these projects.

Sightings suggest that from the Autumn of 1972 D5901 replaced  S15705 as the regular locomotive on the Tribometer Train, although it may have also been used for other test trains. The Tribometer train was formed of Auto-trailer coach RDB975076, van 999900 and Laboratory Coach 22 RDB975036 and was used for Mobile Addhesion Testing.  The Railway Magazine have given permission for their Mobile Adhesion Testing article from the June 1973 edition to be incuded in this dilemma.  D5901 continued to be primarily used on the Tribometer Train until it was taken out of use towards the end of 1975 and left Derby on 18th February 1976 destined for scrapping at Doncaster Works. Its role as regular motive power for the Tribometer Train being taken by Class 24 24061 (ex D5061) which was renumbered RDB968007.

Please submit any sightings you may have made of D5901 from the Summer of 1969 until the Spring of 1976 to Peter Hall. Those of it working the Tribometer or other test trains away from the Derby area will be of particular interest.

Our thanks to Derek Jackson for his information about the “Manual Speed Datum” and “Auto Wagon” Trials.