There is no doubt that on the 2nd May 1985 the bogie less remains of D373-40173 that had been used for training purposes at Perth were moved to Inverkeithing for scrap. There also appears no doubt about the location at Inverkeithing to which it was taken, the bay side scrap yard at The Bay, Jamiestown once operated by T. W. Ward. 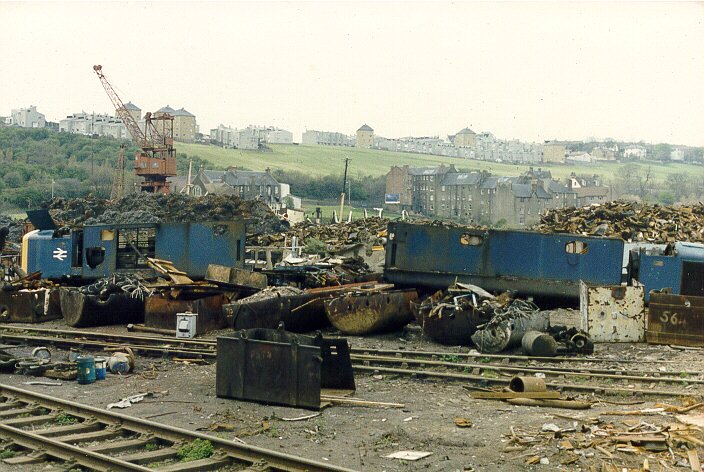 Photographic evidence that the body shell of 40173 actually ended its days in the Inverkeithing scrapyard of James. A. White, Unfortunately the exact date the photograph was taken is not known.   Peter Hall collection

The various disposal books though are not in agreement as to whom operated the yard in May 1985 and thus who was responsible for the locomotives scrapping. ‘The Allocation History of BR Diesels & Electrics (3rd edition)’ gives a disposal to the Forth Ports Authority yard (formerly T. W. Ward), ‘Locomotive Lexicon’ gives a disposal of Forth Ports Authority, Inverkeithing and ‘Diesel & Electric Loco Register (3rd Edition)’ gives J. W. Ward, Inverkeithing to mention but a few.

Study of company histories by John Hall has now established beyond doubt that sometime around 1982 (exact date not yet known) the Inverkeithing yard ceased to be operated by T. W. Ward with operation being taken over by James A. White. James A. White continued to operate the yard until June 1987 when RM Supplies (Inverkeithing) took over. It is assumed actual ownership of the location is with the Forth Ports Authority with the various scrap companies being tenants.

Thus, it is quite clear that D373-40173 was scrapped by James A. White, The Bay, Jamiestown, Inverkeithing in May 1985. The accompanying photograph being further confirmation of that.