Quite surprisingly, considering the interest in locomotive disposals of recent years, the fate of 56015 in 1996 has never been fully resolved. Following the appearance of its fate as a ‘Diesel Dilemma’ more information has though come to light which suggests that it almost certainly met its end in the Rotherham yard of Ron Hull Junior.

The final so far confirmed sighting of this locomotive was made on the afternoon of 18th March 1996 by Sheffield enthusiast Tom Procter. At the time he was observing at Tinsley Depot and noted 56015 travelling northbound on the M1 Motorway. Tom assumed it was destined for the Rotherham scrap yard of C. F. Booth but when he viewed that yard the following day there was no sign of the locomotive. Thus, the question had always been, did it go to that scrap yard and was cut up within hours of its arrival?  This was considered unlikely unless someone knows otherwise, or did it meet its fate elsewhere. The latter appears to have been the case as we have been contacted by an enthusiast who recalls seeing the shell of a Class 56 in a Rotherham scrapyard at about this time. This enthusiast is almost certain that yard was the one belonging to Ron Hull Junior. It was definetly not the Rotherham yard of C.F. Booth as he had also visited that on the same day. In 1996 the only scrapping of locomotives undertaken by Ron Hull Junior had been that of 56002 on site at Doncaster Depot in March 1994. It was 2005 before they were involved in any further locomotive scrapping. Thus, in March 1996 the yard of Ron Hull Junior was very much off the ‘radar’ and Tom Procter did not call by on the 19th March or in subsequent weeks. It would be nice to get further absolute confirmation that this was the fate of 56015 but all the evidence points to 56015 having been scrapped at the Rotherham yard of Ron Hull Junior in March/April 1996.

Various other references to the disposal of this locomotive have appeared in print but none are conclusive and most can be dismissed when the 18th March 1996 sighting is taken into consideration. Indeed the exact whereabouts of 56015 since it was put to store in June 1992 and being seen on the M1 Motorway in March 1996 are not clear although it is probable that it spent most of the time at either Doncaster Works or Doncaster Depot.

Unfortunately, although their are a plethora of magazine references to the location of 56015 after June 1992 these are often contradictory and thus have to be treated with caution especially as some give the impression that it kept being moved between Doncaster Works and Doncaster Depot.

In order to fully unravel this dilemma it is obvious that a history of sightings and movements of 56015 since June 1992 needs to be compiled. Thus, anyone who actually observed 56015 from June 1992 onwards is asked to submit their observations to Peter Hall giving date and location observed.  It is particularly important that any observations submitted made at Doncaster specify exactly where at Doncaster e.g. Doncaster Depot, Doncaster Works, Doncaster Belmont Yard. 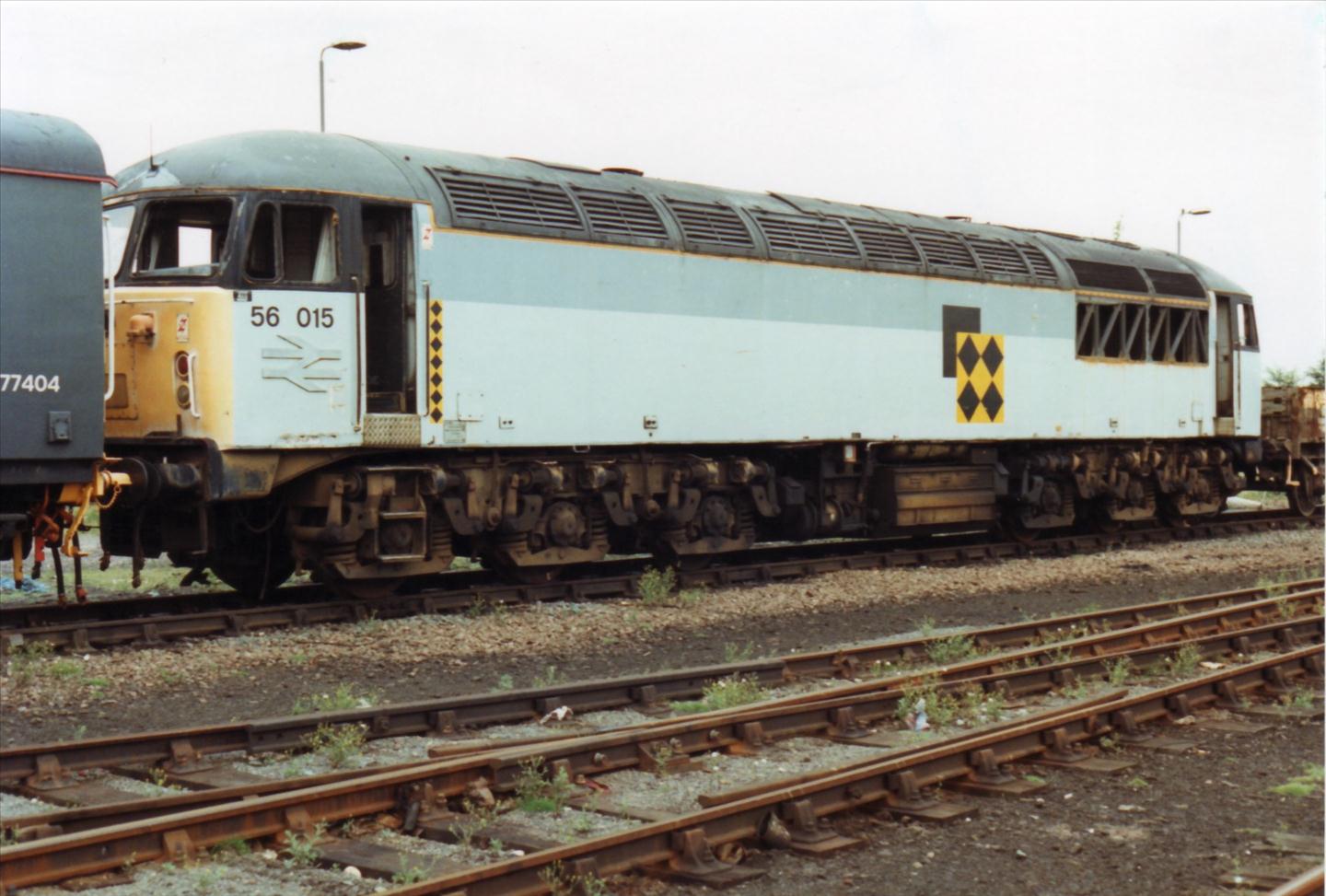 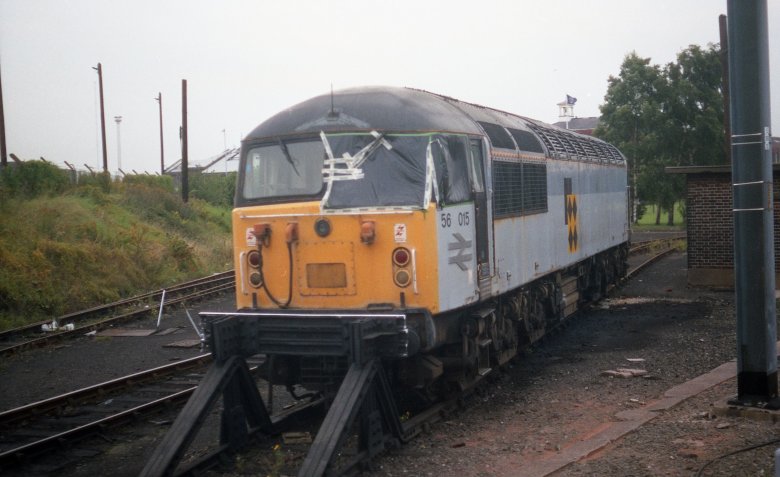 56015 awaiting entry/departure from Doncaster Works. Unfortunately the date of this photograph is not known.   Pogo

Once it had become obvious that 56015 was no more the topic of its disposal had been raised in several publications. When raised in Rail magazine a reply was received that 56015 had been scrapped by MRJ Phillips at Doncaster Works in March 1996. A subsequent edition recorded that MRJ Phillips had been in contact and denied that they had been involved with the locomotives disposal. Railway Magazine quoted sources within Adtranz, Doncaster reporting that 56015 had been towed away by rail, possibly to Immingham, in March 1996. This is later followed by the same magazine saying that Loadhaul confirms it sold the stripped remains of 56015 to Adtranz in March 1996. It goes on to say that reports from Adtranz indicate 56015 visited Tinsley in March 1996 for the removal of parts before being returned to Doncaster (Works?) and in June 1996 was sent across to Doncaster Depot for assessment by local scrap dealers. Finally, Roger Harris records in The Allocation History of BR Diesels & Electrics that 56015 was scrapped by MRJ Phillips in June 1996 having repeated much of the Railway Magazine information. Tom Procter actually viewed Tinsley depot almost daily during 1996 and never observed 56015 there and if 56015 did return to Doncaster why have no reported sightings of it after 18th March 1996 been traced? Thus, nothing to contradict the scrapping having taken place at the Rotherham yard of Ron Hull Junior in March/April 1996.