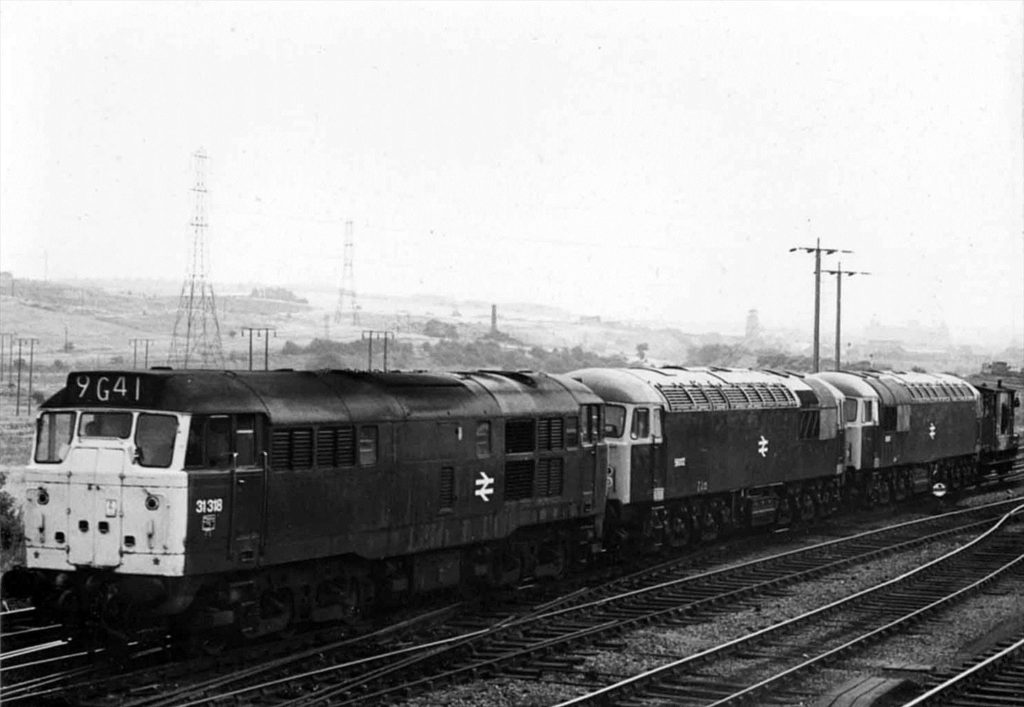 The thirty Class 56 locomotives built by Electoputere at Craiova, Romania arrived in Great Britain at Harwich during 1976 and 1977. They were then moved by rail to Tinsley depot one or two at a time with some subsequently being forwarded to Barrow Hill and Darnall depots for storage (see Note 6). Although most commisioning work was undertaken at Tinsley depot the first eleven locomotives had defects that required rectification elsewhere before entering service (see Note 7). A member is very interested to know which locomotives where moved from Harwich to Tinsley on which date and the locomotive(s) used for each movement.

In all cases it is believed the train conveying the locomotives was routed from Harwich via Ipswich, Bury St. Edmunds, Ely, March, Spalding, Gainsborough Lea Road, Retford Low Level, Woodhouse and Darnall to Tinsley. It is presumed they by-passed Sleaford and Lincoln on the avoiding lines. The first five trains which conveyed 56001 – 56008 were routed via Colchester Depot for inspection with subsequent trains running via Manningtree East to North curve.

Information so far compiled is shown below, further observations and comments would though be welcomed as would any photographs of the trains. It has become apparant that on most, but not all dates, a locomotive change took place at Grassmoor Junction, March, thus location of observations is of importance.

We are particularly grateful for permission to use information previously published by the Ipswich Transport Society and in the article ‘From Romania with Love’ written by Society member Graham Hardinge and published in ‘Gridiron’ the journal of the Class 56 Group.

If you can add any further information please contact Peter Hall

1. These were the first to arrive in Great Britain and were landed at Harwich Town via the linkspan at 17:30 on August 4th 1976. They were the hauled from Harwich Town to Harwich Parkeston Quay yard by 08767. It appears that they remained their until the morning of the 7th August 1976 when they were hauled to Colchester for inspection by 31318. They departed at 10:30 that morning also behind 31318 bound for Tinsley via Manningtree and the normal route.

2. 56004 was the first of the Class to haul a passenger train. This occured on 22nd June 1977 when 45022 hauling the 10:20 Penzance-Leeds failed at Wincobank Station Junction (better known these days as the site of Meadowhall station). 56004 assisted the failed train to its destination. This was rather unfortunate as the ‘Melton Mowbray Pieman’ excursion of 24th July 1977 had been advertised to be the first use of a Class 56 on a passenger train (see Note 4.).

5. On 22nd April 1977 the train terminated at Lincoln as no guard available to work forward. The two locomotives remained at the former Lincoln Steam depot until the 25th when they were worked forward to Tinsley. 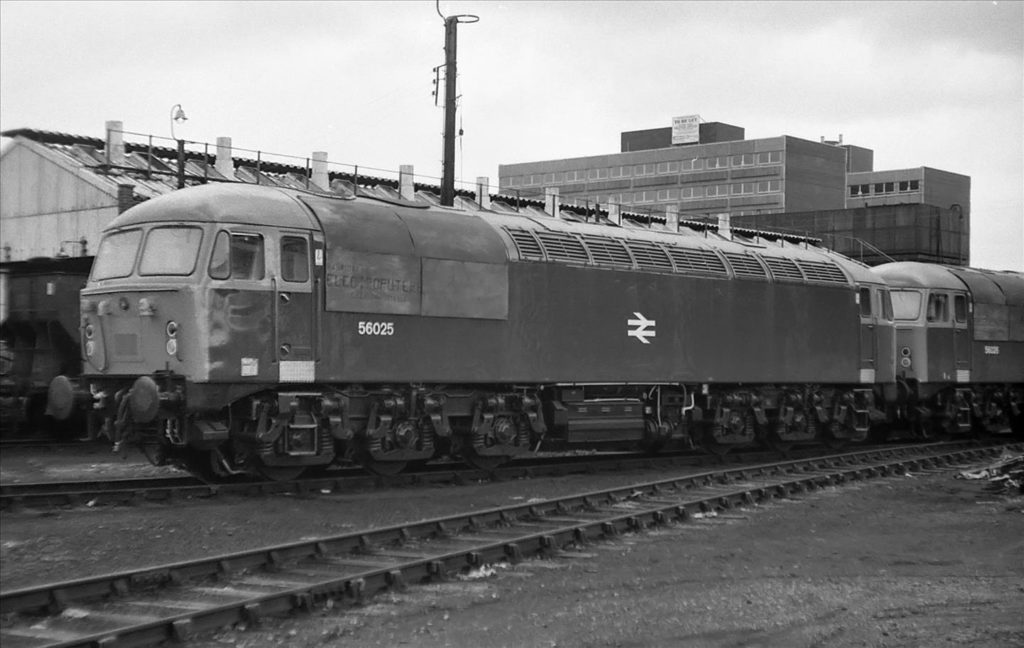 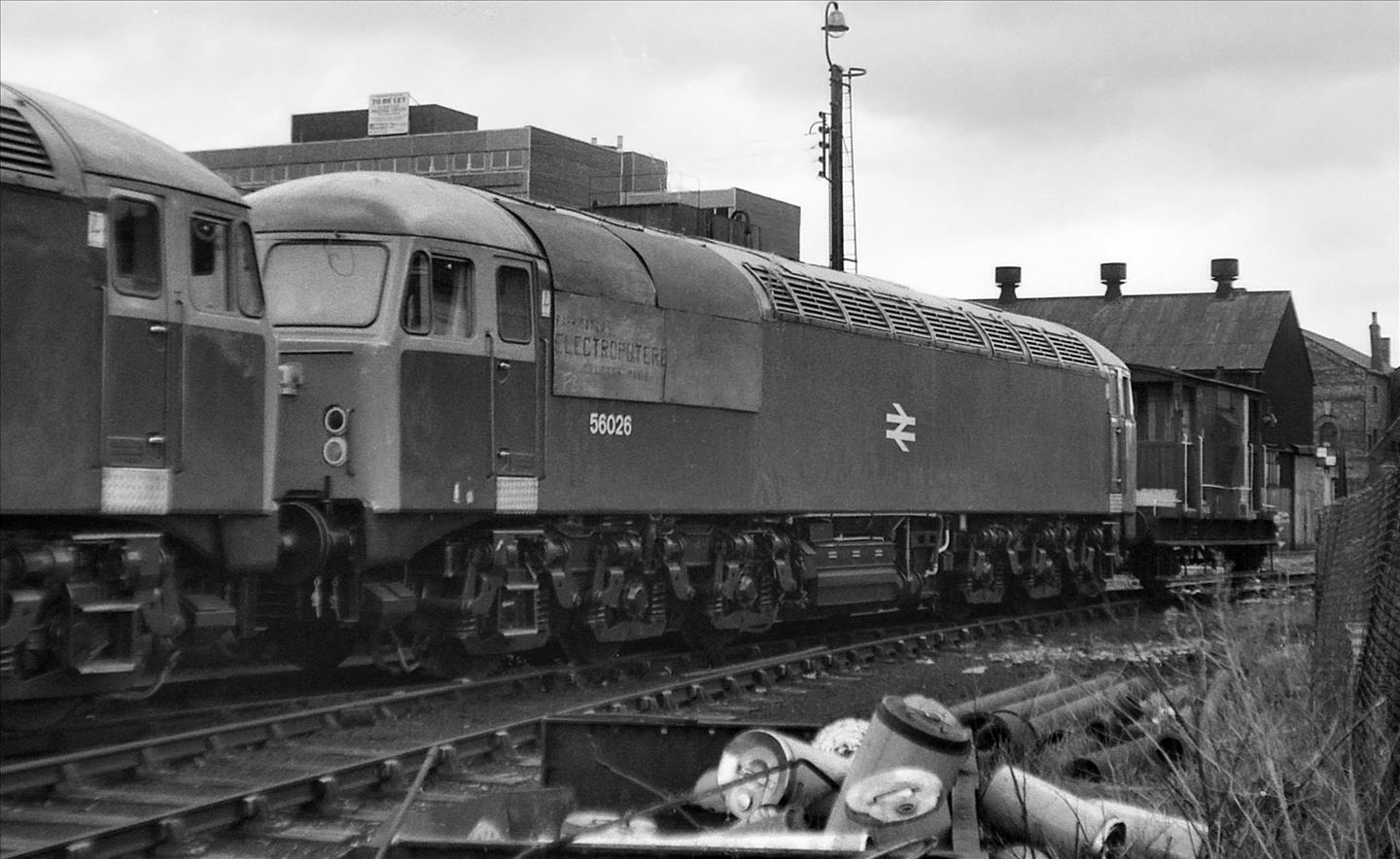 Initial storage and rectification locations away from Tinsley

7. Prior to entering service 56001 – 56011 all visited Doncaster Works for attention to defects. 56003 and 56010 also similarly visited Derby Locomotive Works with 56003 spending some time at the Railway Technical Centre, Derby. 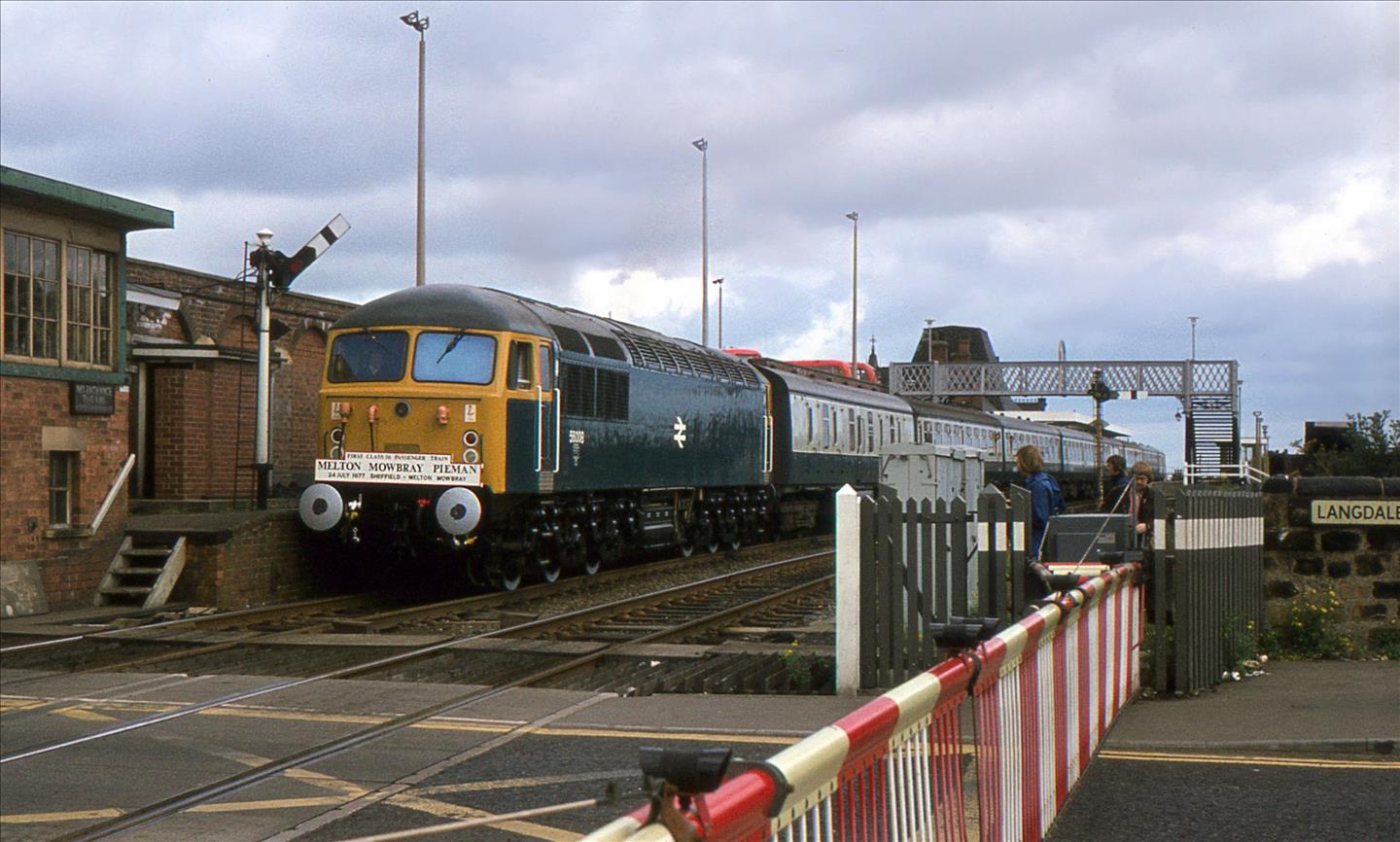 What was advertised to be the first Class 56 passenger train departs from Barnsley on the morning of 24th July 1977. The ‘Melton Mowbray Pieman’ was of course headed throughout by 56008.   Dave Glossop 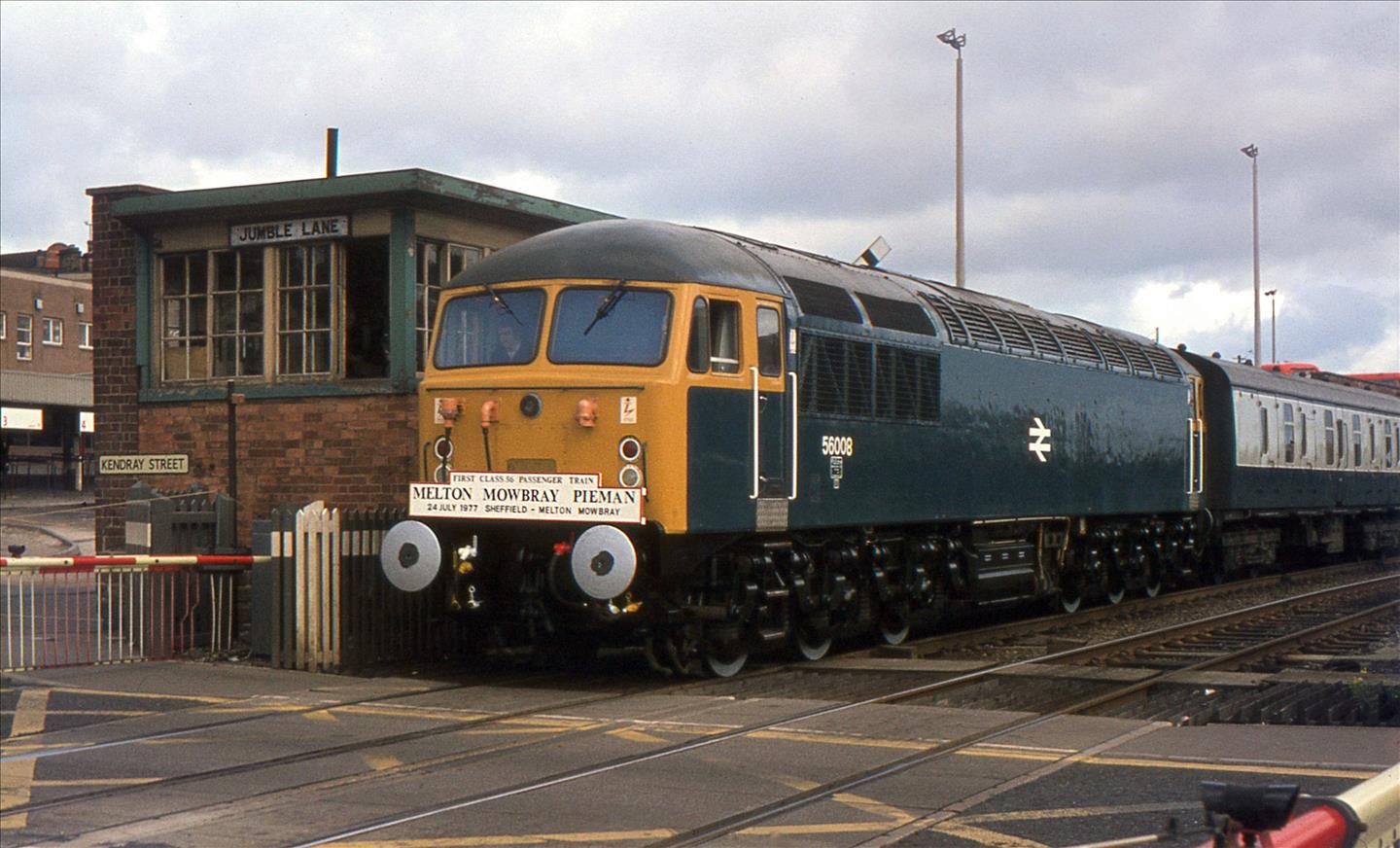 The ‘Melton Mowbray Pieman’ headed by 56008 passing Jumble Lane signalbox just after departing Barnsley. The headboard was through not quite correct as the train started from Barnsley not Sheffield and 56004 had been used on a passenger train the month before.   Dave Glossop 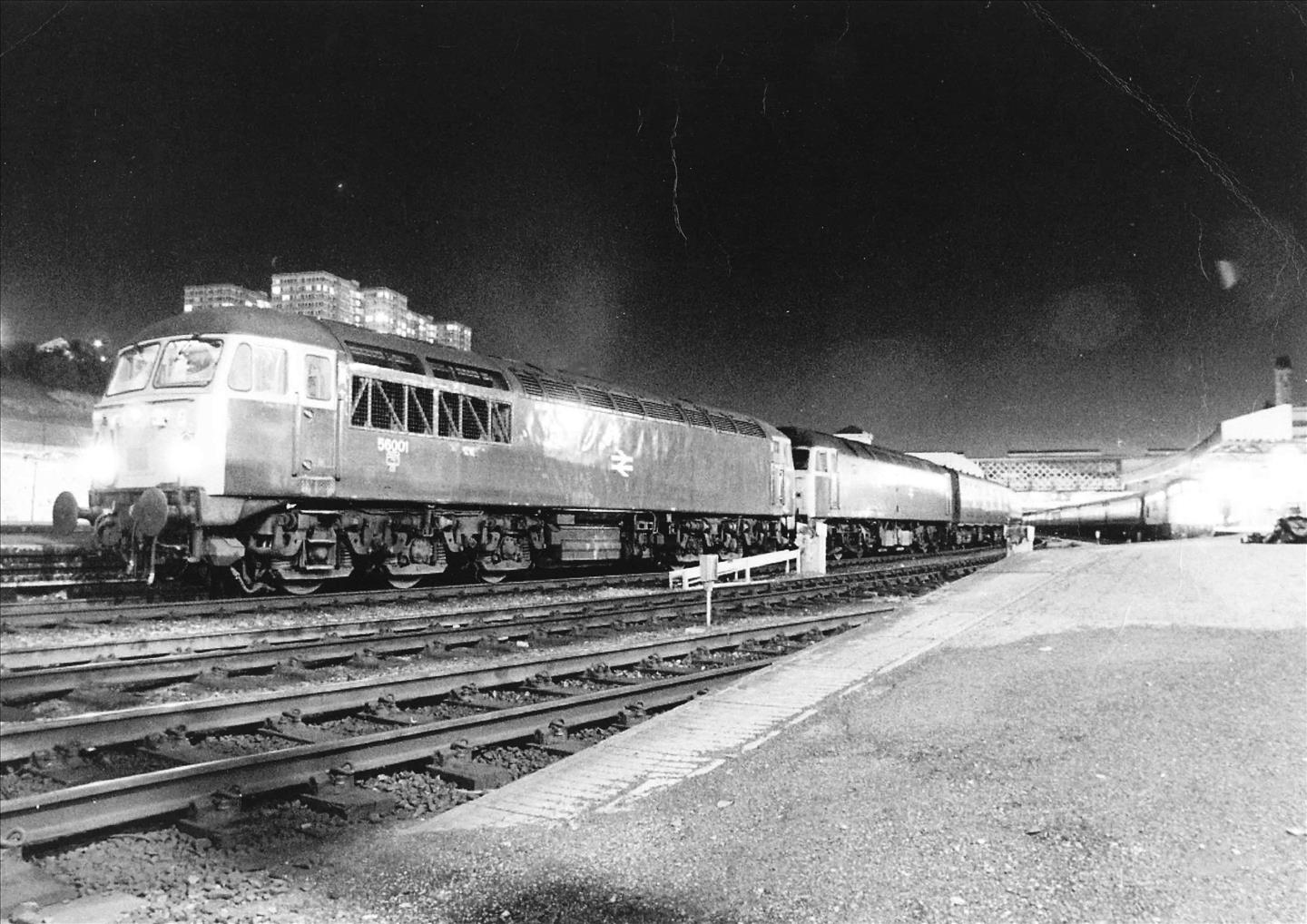 56001 is pictured at Sheffield late one evening, some time in 1978-1981, having arrived on 1E73 17:45 Cardiff-Sheffield which it had rescued following the failure of 47072. The date and any further details of the event would be welcomed.   John Wade

56001 – Date unknown – The delayed 1E73 17.45 Cardiff-Sheffield arrived at Sheffield with 56001 piloting a failed 47072. It is not known where 56001 was attached to the train. The fact that 47072 was the train engine suggests it was before the train was formed of air-conditioned Mark 2 stock, thus probably 1978/1979. Local opinion though suggests the event took place slightly later, possibly 1980/1981. If correct, it would be unusual for a locomotive without ETS to have been the train engine. We are extremely grateful that John Wade, the photographer who took the only known picture of the event has allowed it to be reproduced here. John has yet to find the notes he made at the time which might help establish the date.