Still surving in Italy in September 2015 was this Class 03, carefull examination has concluded that its BR identity was 03156. It is located at the entrance to to the yard of Ferramento Pugliesse, Terlizzi, Bari, Italy.   Peter Wreford

During 1976 Shipbreaking (Queenborough), Queenborough, Isle of Sheppey reportedly acquired 03010, 03098, 03153 and 03156. They are reported (p.226 7/76 RO) as having been hauled as 9Z10 00:40 Tyne to Stranraer special freight on 18th May 1976 for, it is understood, shipment to Italy. Curiously no observations or other evidence has so far been found confirming Stranraer, a ferry and fishing port, was actually port of embarkation. It has thus been concluded they were actually moved from Stranraer to Cairnryan, presumably by road, where Shipbreaking (Queenborough) Ltd had a port side yard. A visitor to this yard that July was told three Class 03 had been sold from there to Italy. Thus, port of embarkation was most likely to have been Cairnryan.

The subsequent history of the three or four is somewhat of a mystery. The only one ever reported as being seen in Italy is 03156 but all sightings of this have been in recent years following its discovery at Ferramento Pugliesse, Terlizzi, Bari in 2014.

Port of disembarkation in Italy is reported to have been Trieste but nothing to support that has emerged. Was that simply an assumption as that is where locomotives exported the following year disembarked? The same source suggests that all four went to the Lucchini Group steelworks at Servola, Trieste, Italy but no observations or photographs have yet emerged confirming this.

In fact, recent sightings of 03156 excluded, the only possible sighting was made at Acciaierie Rumi, Montello in December 1990. In the background of a picture of a 1943 built German locomotive is a BR Class 03 in the same shade of blue now carried by 03156. It has bee recorded that this was 03098 but how that was established is not known.

Recent research by David Gregory casts doubt on the Servola reference. David says that any documentation that suggests that Ex BR locomotives were exported for use by Lucchini at Servola is an anachronism – Lucchini group did not have any holding/interest at Servola until 1995. 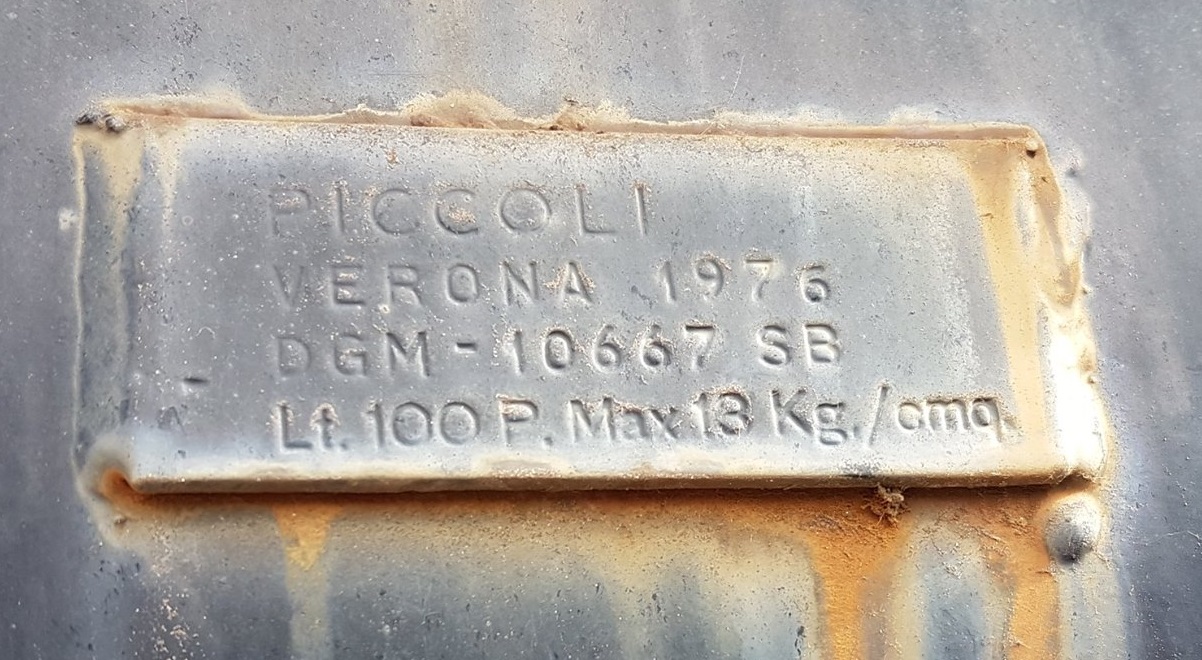 Attached to an additional air receiver that has been fitted to  03156 is the plate on the right.  This bears the inscription “PICCOLI VERONA 1976”. The date fits in rather nicely with the date that the  shipment of 03s arrived at Trieste from Cairnryan and the location is on the doorstep of IPE, Verona.  Perhaps this goes some way to suggest that the locos arriving at Trieste were subsequently modified for use in Italy (with additional air brake equipment required) by (nascent) IPE, maybe it even suggests that the locos were shipped to IPE’s site (near Verona) in the same year they arrived, so maybe they never actually worked in Trieste but were found new homes by IPE throughout Italy.

Briefly, what is known about each of the four locomotives can be found by clicking on the individual locomotive number below. It should be noted that in some cases this contradicts what may have been published elsewhere. Thus the need to compile as much information as is possible about these locomotives.

Details of all the Ex BR locomotives exported to Italy can be found here.