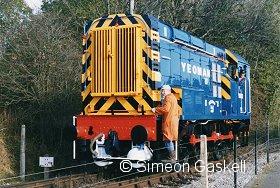 Arrived Merehead Stone Terminal February 1975 and spent most of its time their until being loaned to the Mid-Hants Railway in 2008. In the early 2000's it did spend various periods of time at the East Somerset Railway and in 2006 it spent some time at Whatley Quarry. It was overhauled at Eastleigh Works during 2010-2012.