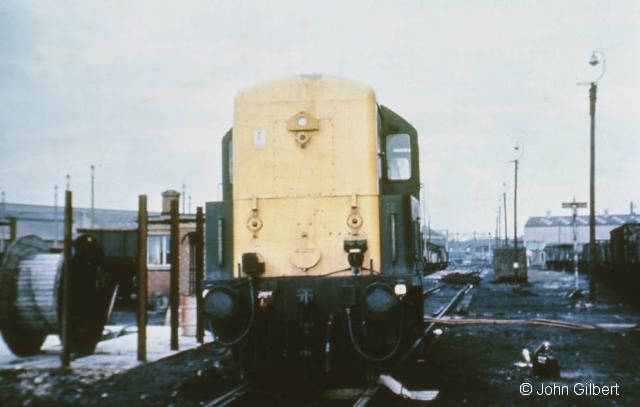 DB968002 at Darnall, Sheffield on 19th April 1975 during its short stay in connection with the introduction of air-conditioned Mark 2 coaching stock to St.Pancras-Sheffield trains.   John Gilbert – Class 15 Preservation Society

Converted to ETS generating unit in 1969. Although very much associated with the GN & GE areas this locomotive first saw use at Bradford. During early 1973 it spent some time at Swansea and appears to have been ‘too and thro’ between there and Finsbury Park several times. The RO (p.123 4/73)reports that it was due to be moved in freight trains from Temple Mills to Landore during February 1973. Sightings and information about its movements at this time are particularly sought. During 1975 it was again away from familiar territory when it saw use at Sheffield. During late 1981 it moved to Derby, then onto Toton, where it became a source of spares for DB968000. In 1985 it again moved to Sheffield, but on this occasion for scrap.