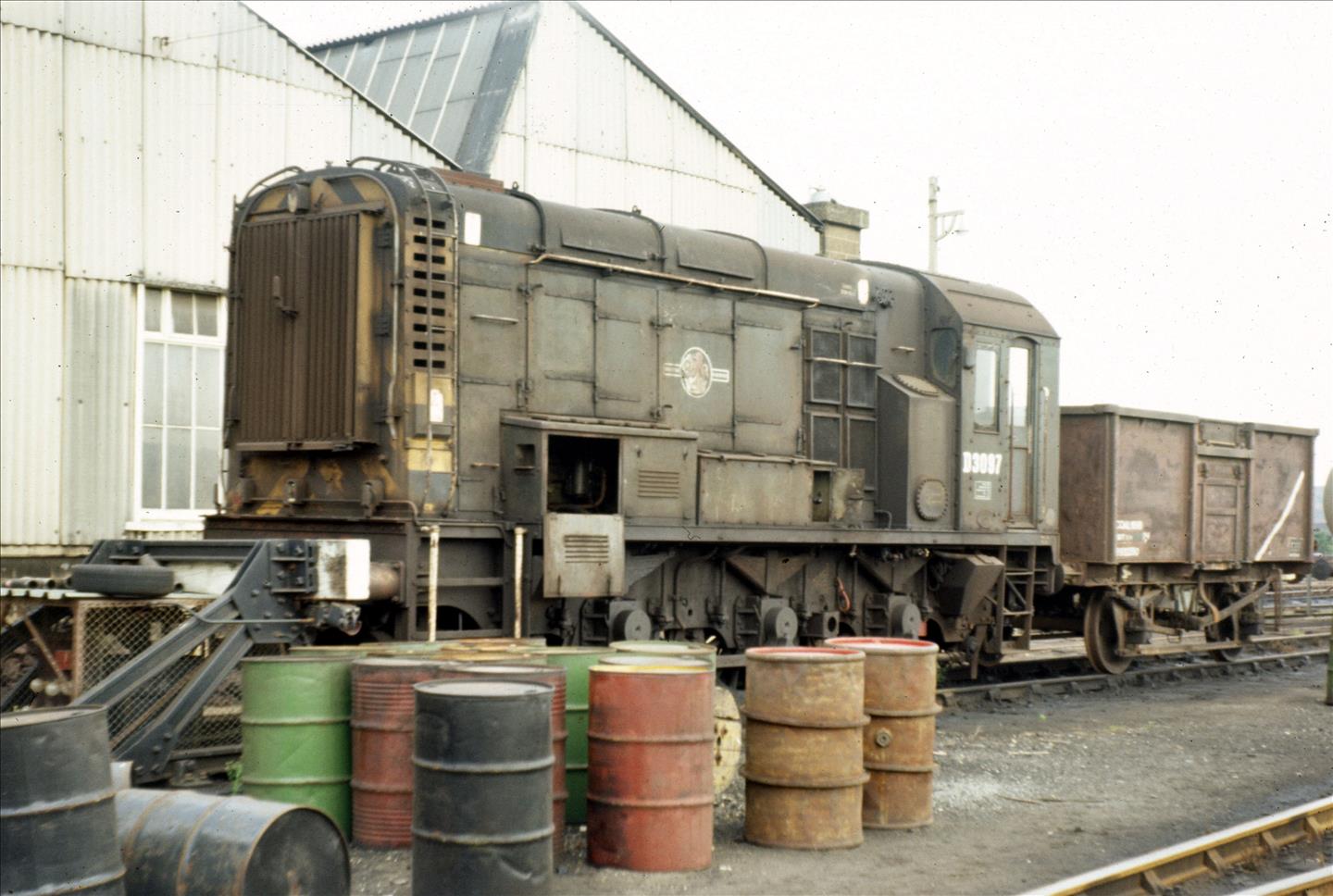 The first Class 08 shunting locomotive withdrawals, with the exception of D3193 that may have been accident damaged, but could have been exported to Italy, took place in 1972. This included the ten based on the Southern Region which did not have train brakes, D3092 – D3101. The disposals of eight of these appear to have always been correctly recorded with D3092, D3094, D3098 and D3100 being exported to Liberia (after overhaul at Derby Works); D3099 seeing further use at Shipbreaking, Queenborough, Isle of Sheppey prior to scrapping; D3101 seeing use with Redland Roadstone, Loughborough prior to preservation at the Great Central Railway; D3095 and D3097 scrapped at Swindon Works. However, the disposals of the other two, D3093 and D3096, would appear to have been persistently wrongly recorded.

It is interesting to note that no disposal for D3093 and D3096 was given in ‘Pronounced Life Extinct’, it being presumed the authors simply did not know what had become of them.

If we consider D3096 first, the only information published in journals with regard to its disposal was in the RO (p.13 1/77). This says with reference to the list on p.41, February 1975 R.O. (this was a list of shunting locomotives that the ‘withdrawn locomotives’ editor had not then established a disposal for) that 3096 was cut up for spares at Selhurst Depot by B.R. during September 1972. It being presumed this reference being the one used in all subsequent disposals listings. However, the What Really Happened to Steam project team who are re-examining steam locomotive disposals have unearthed evidence to suggest that this was certainly not the case. In the records of J. Cashmore they have discovered an entry for D3096 showing it as being accepted into the companies Newport Yard on 21st November 1972. Although no enthusiast sighting of the locomotive at Newport has yet been traced the fact that no other discrepancies have been found in the J. Cashmore records indicates this to be the correct disposal of this locomotive. Could the Selhurst disposal be another example of the ‘Zulu fabrications’ that have plagued steam locomotive disposals publications. Further confirmation or otherwise of the fate of D3096 would be welcomed but it appears clear that it ended its days at Newport rather than Selhurst.

With regard to D3093, the last published observation so far traced was at Ashford Chart Leacon on 12/08/1973 (p.416 12/73 RO), in the company of 3095. Subsequently the RO records that it was sold to G. Cohen, Kettering during January 1974 (p.46 2/77 RO). All subsequent disposals books give G. Cohen, Kettering for the locomotives fate. It should be noted that the 1977 RO reference was again a response to the earlier RO listing (p.41 2/75 RO) of locomotives the then withdrawn locomotives editorial representative lacked disposal details for. The wording suggests that the G. Cohen, Kettering reference is not though based on any observation of the locomotive at that location.

In addition to no observations of 3093 at Kettering having been so far traced the following anomalies regarding this and other disposals to G. Cohen yards have also been identified.

Firstly, Richard Day has unearthed a reference to a visit made to Ashford Chart Leacon in September 1973 which records both 3093 & 3095 still present coupled together and both ticketed Swindon Works. Although the RO subsequently reports 3095 as present at Swindon Works on 22/11/1973 (p.9 1/74 RO) and cut by 19/12/1973 (p.48 02/74 RO) there is no mention of 3093. The Swindon Works reports in the RO at the time were always very reliable and comprehensive. Is it though just possible that 3093 arrived and was cut without the RO correspondent observing it?

Thirdly, although the majority of locomotives sold to G. Cohen ended up in the Kettering yard or the yard of Pollock & Brown in Southampton a few ended up at other G. Cohen Group yards. The yards at Morriston (Swansea), Kingsbury (Warwickshire) and Cargo Fleet (Middlesbrough) are recorded as scrapping locomotives in 1968/1969 whilst the Templeborough (Rotherham) and Park Royal (London – former Cox & Dank) yards are reputed to have cut BR diesel shunting locomotives despite no observations existing to support this.

Fourthly, following publication of the ‘What really happened to steam’ article in the RO (p.231-232 4/10 RO) the following comment was received from a gentlemen from Corby. “I think that the mistakes in publications have carried on into the diesel era. Quite a number of locomotives are reputed to have been scrapped at Cohens (Kettering) but some of the ones stated were not seen by any of the locals; Cohens, were not noted for scrapping anything very quickly”. Could it be that locomotives recorded as being scrapped at Cohens, Kettering were sold to Cohens but directed to one of the other yards. It not being appreciated at the time that Cohens were scrapping locomotives at other yards as well as Kettering.

Fithtly, within days of this dilemma being added to the RCTS website Stewart Hookins submitted a sighting of 3093 at Hither Green in January 1974. Obviously this fresh information rules out the possibility of 3093 having been scrapped at Swindon Works in late 1973. This obviously raises further questions, firstly, when and why did 3093 arrive at Hither Green? Secondly, when did it depart Hither Green and where did it go next? Further sightings of 3093 during the winter of 1973/1974 are thus very much sort.

Obviously, any observations of 3093 after September 1973 would be very useful in confirming what became of this locomotive. In addition it would be interesting to receive reports of visits made to the G. Cohen yards when pre-TOPS numbered diesel shunting locomotives were present.