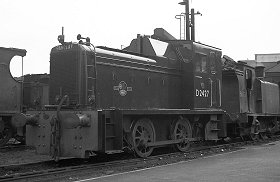 First allocated to Motherwell in December 1959. Transferred to Greenock (Ladyburn) in March 1960. It is then recorded as having been transferred to Polmadie in February 1968. Observations received taken along with other information suggest though that it was actually transferred to Hamilton in cJune 1966 and onto Polmadie in February 1968. The RO records that by September 1967 (p.377 11/67) Greenock (Ladyburn) had been replaced by Gourock as a stabling point and the shed was now a heap of rubble! The only sightings of this locomotive between June 1966 and February 1968 are at Hamilton which does suggest that was were it was allocated. Transferred to Eastfield in April 1968 from where it was withdrawn in September 1969.