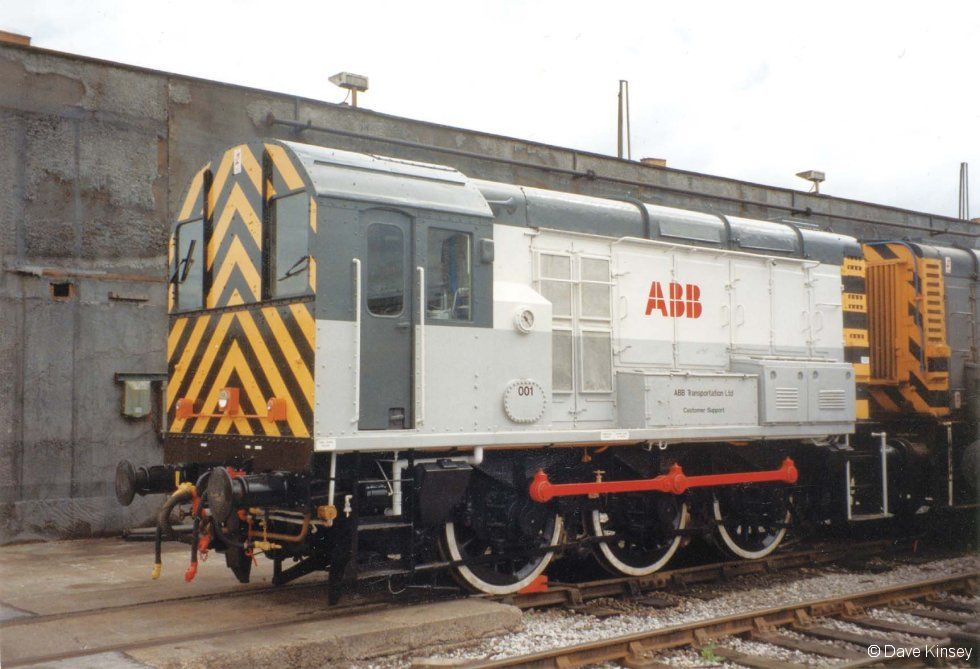 08787 in Crewe Works on 31st July 1993 a few months after it had appeared numbered 001. Study of the photograph clearly shows frame and other characteristics that confirm it was previously numbered in the range 08699-08958   Dave Kinsey

These two locomotives are best considered together as they both carried the others identity after withdrawal from British Rail service, although not at the same time.

The best place to start this story is on page 93 of the February 1993 Railway Observer. Here in the WORKS REPORTS under ABB Transportation Ltd, Crewe it states Two of the companys Cl.08s were present, recently repainted in ABB livery and numbered Customer Support 001 and 002. Confirmation of their previous identities would be welcome. No confirmation ever appears to have been published but 001 was previously 08787 and 002 previously 08943. Both still existed in 2013, 08787 was then located at Hanson Aggregates, Machen Quarry, nr Newport and 08943 at Bombardier Transportation, Central Rivers Depot, Barton-under-Needwood, Staffordshire

It appears that 08943 has always correctly been recorded in disposal books, so no need for further comment. 08787 though has always been recorded to have been scrapped at Booth-Roe Metals, Rotherham in all subsequent disposal books. The truth is of course it still survives but the mistake is understandable as it was obviously mistaken for 08296 as explained below.

Although the exact circumstances remain a mystery and probably always will, at some time during 1992 when 08787 was becoming 001 in Crewe Works the derelict remains of 08296 were renumbered 08787. Thus, it was 08296 masquerading as 08787 that was scrapped at Booth-Roe Metals in 1994 and not the real 08787. This mistake presumably originates from 08296 being the only one present at Crewe Works in 1991 that could not be subsequently accounted for towards the end of 1992. It being compounded in recent years by 08787 being numbered 08296 after sale to Mendip Rail, probably as a result of its new owners reading that was its identity in one of the disposal or similar books! 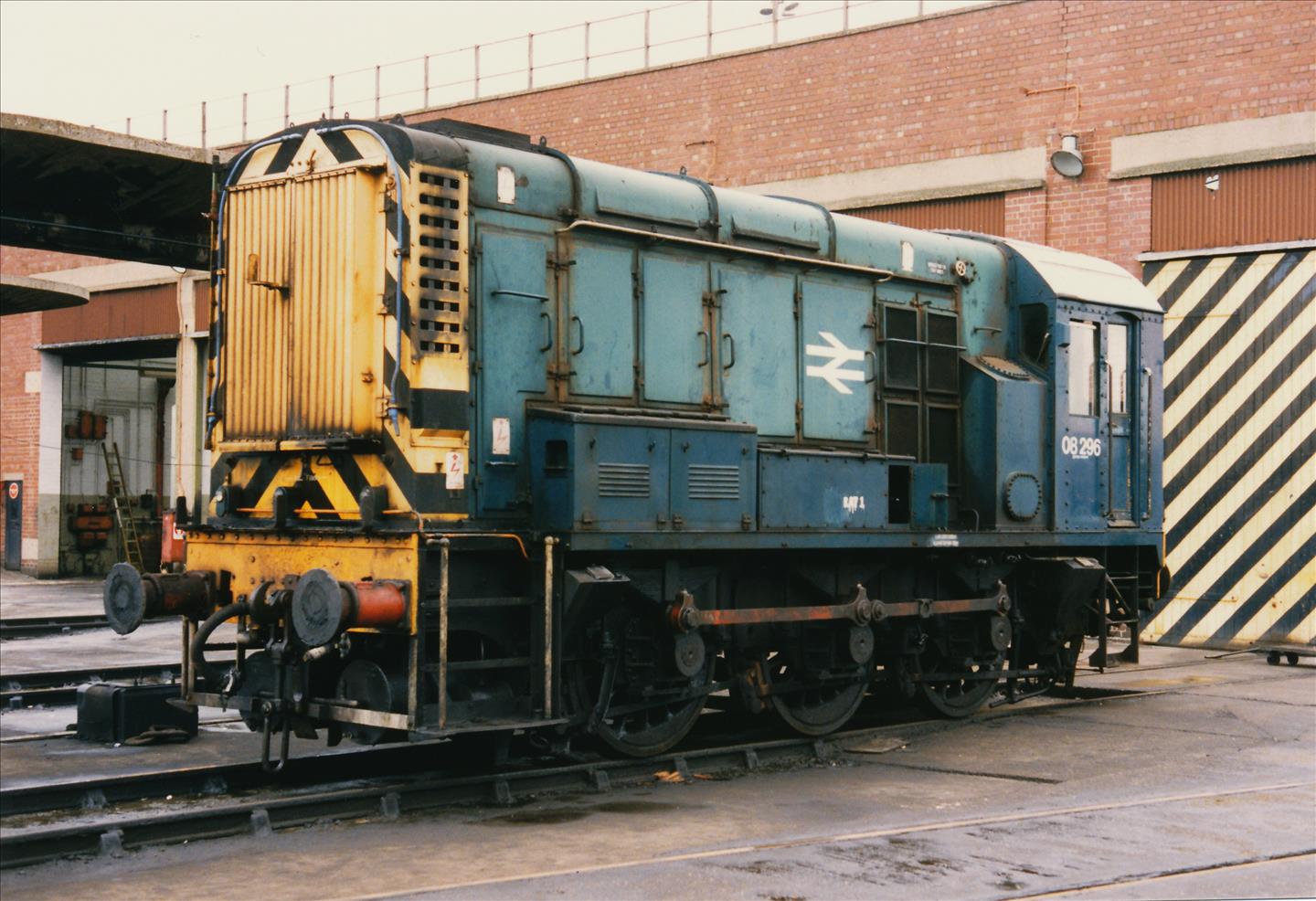 Pictured when in BR service, 08296 is seen stabled at Botanic Gardens depot, Kingston upon Hull on 10th May 1986   Jonathan Longbottom 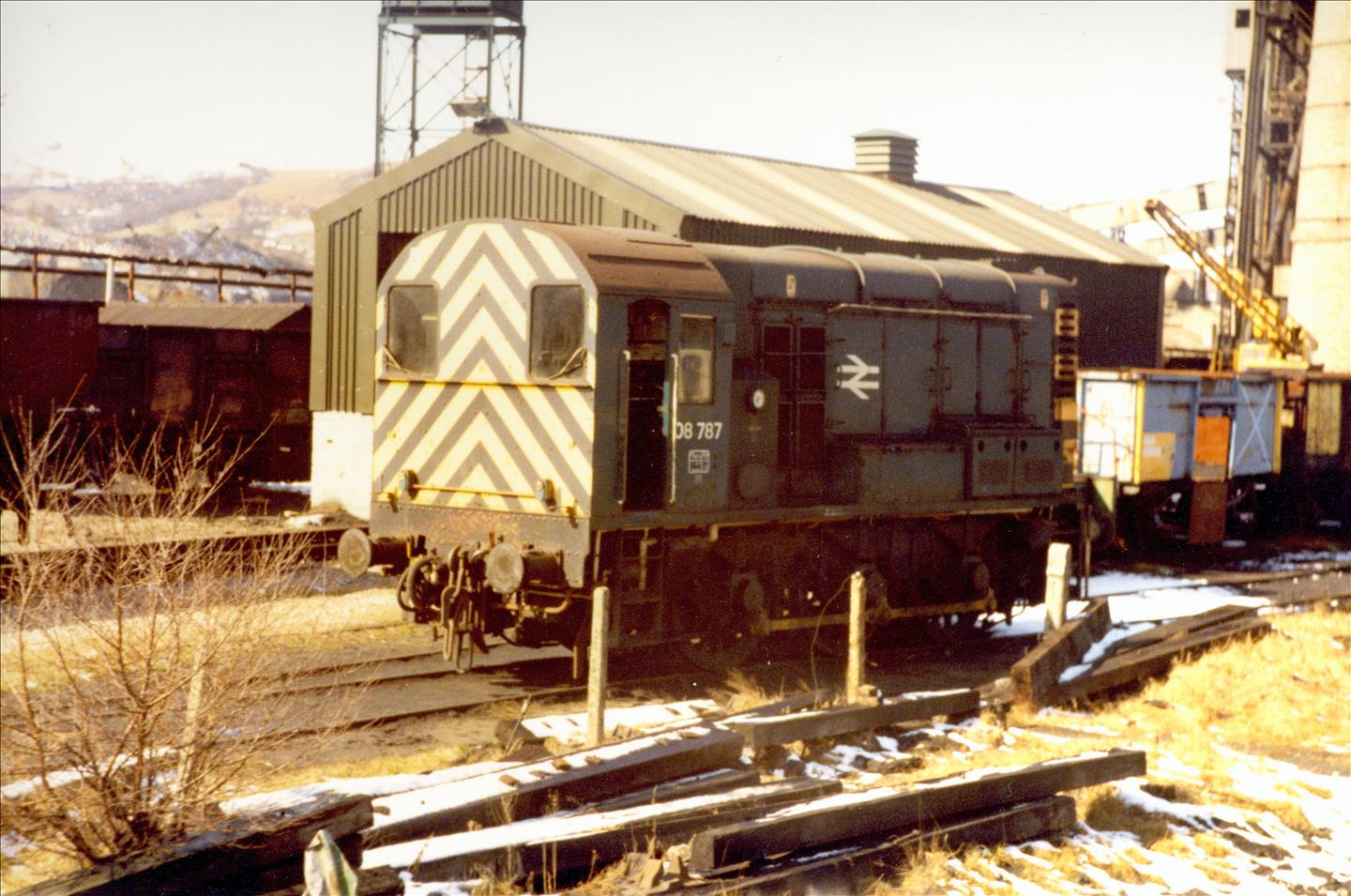 Pictured when in BR service, 08787 is seen stabled at Abercwnboi Phurnacite Plant, between Aberdare and Mountain Ash during 1985   Brian Rolley

The transformation of 08296 into 08787 is best described through a series of pictures.
The first two pictures show a substantially complete 08177 and to the right of it a rather derelict 08296, both were taken at the 1990 Crewe Works Open Day.
Although ‘off limits’, by special arrangement the photographer was able to take the pictures.
In particular note the rusty roof panels, white cab roof and high level lamp bracket of 08296 and the strap hinge doors on the bodyside of 08177.
Picture 3 was taken three years later and shows the two locomotives again together, but by this time 08296 has taken on the identity of “08787” which it is not.
Note the distinctive rusty roof panels and white cab roof off 08296 and solebar consistent with locomotives numbered below 08699.
Comparison of 08296 in both photographs will reveal many other unique details to support that they are the same locomotive.
It can also clearly now be seen that 08177 has lost its distinctive strap hinge doors and 08296 has gained a set of such doors.
The fourth picture shows 08296 masquerading as 08787 awaiting scrapping at the Rotherham scrap yard of C. F. Booth on 19th February 1994. This is taken from a different angle to the previous pictures but there is no mistaking that it is a heavily disguised 08296. The final picture shows the genuine 08787 in 1987, comparison with pictures of the locomotive carrying number 08787 in 1993 and 1994 gives confirmation that they are not the same locomotive. 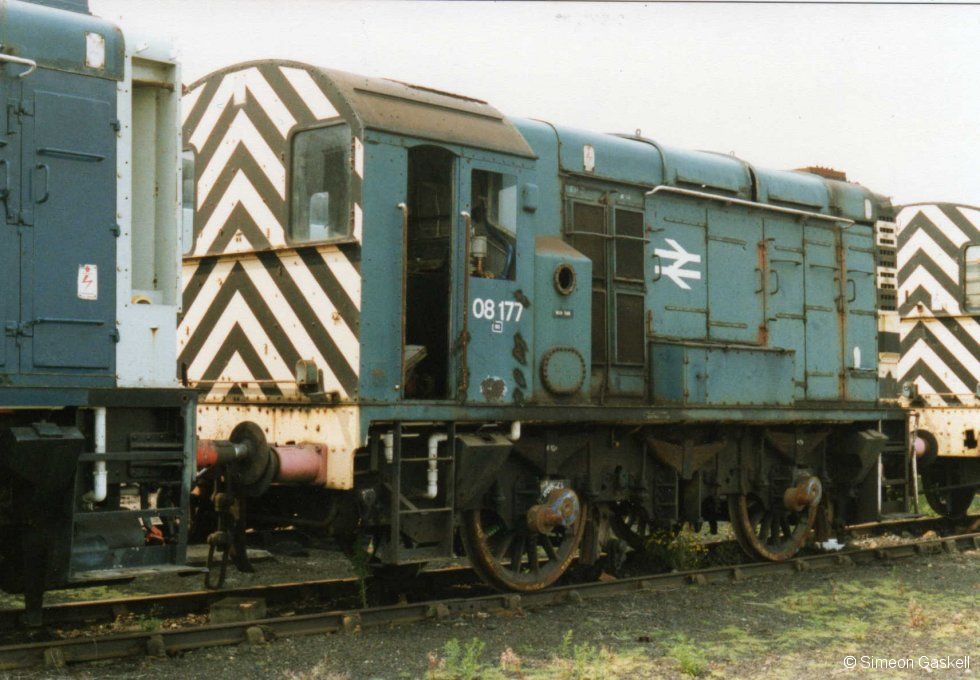 08177 as it was in Crewe Works on 21st July 1990. Particularly note the strap hinge doors on the bodyside   Simeon Gaskell 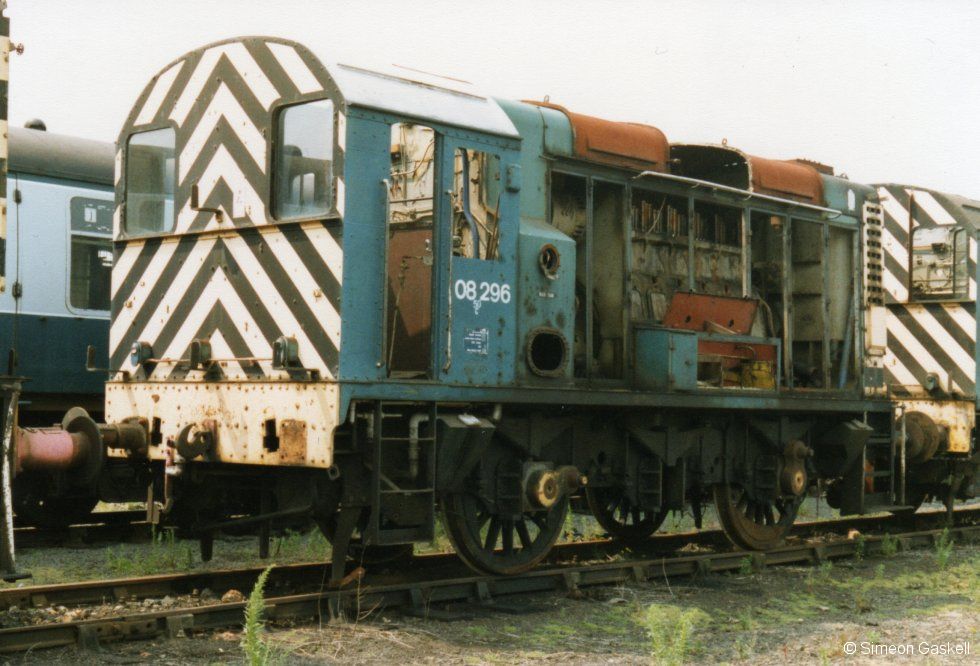 08296 as it was in Crewe Works on 21st July 1990. Particularly note the solebar, rusty roof panels and white cab roof   Simeon Gaskell 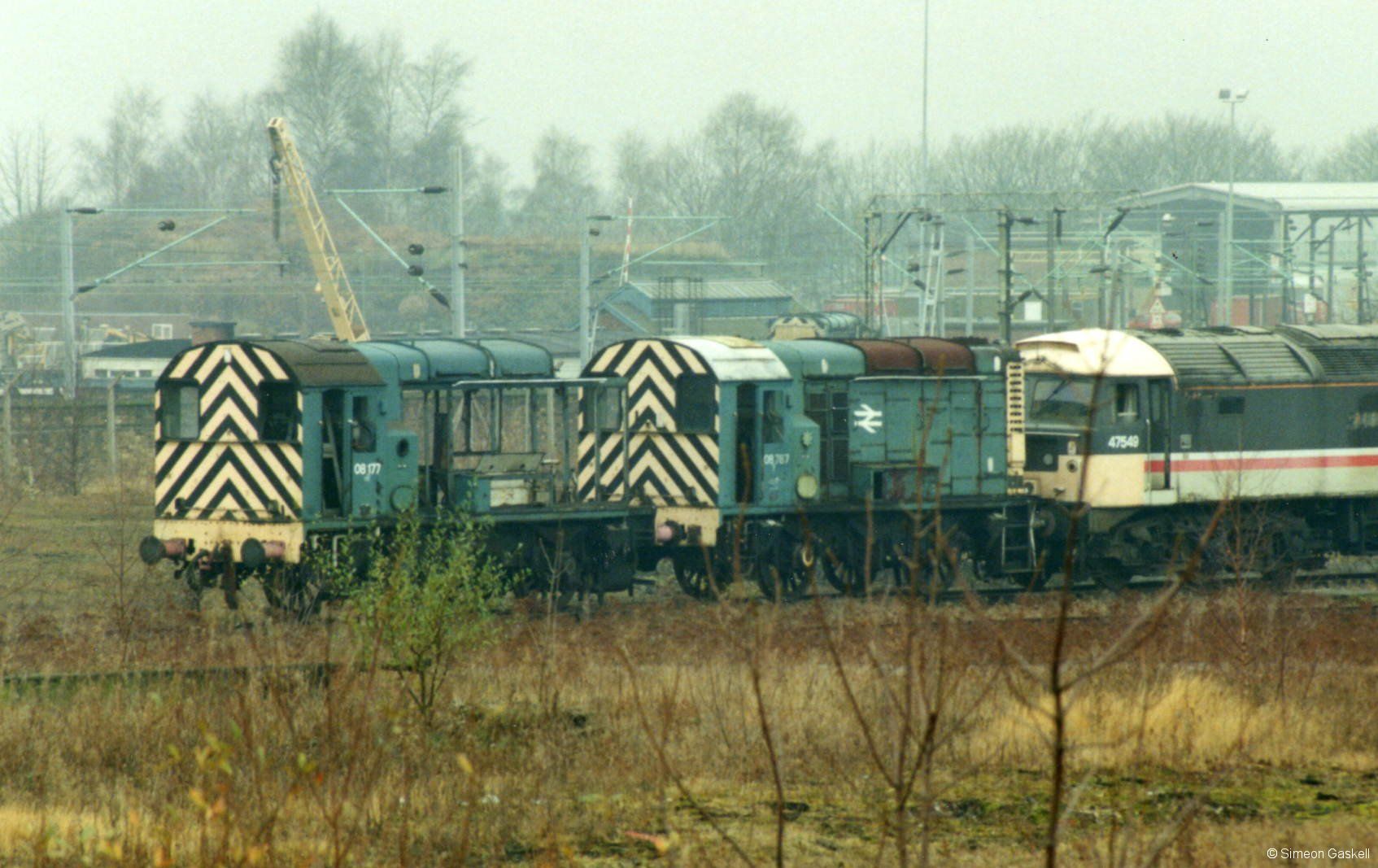 08177 and 08296, masquerading as "08787" are in the company of 47549 in Crewe Works on 27th November 1993. Note that 08177 has lost its distinctive strap hinge doors and 08296 has gained a set. The solebar though is evidence that the locomotive numbered 08787 can not be that as it is of the early style meaning it has to have originally been numbered below 08699. The rusty roof panels and white cab roof being features pointing to its true identity being 08296   Simeon Gaskell 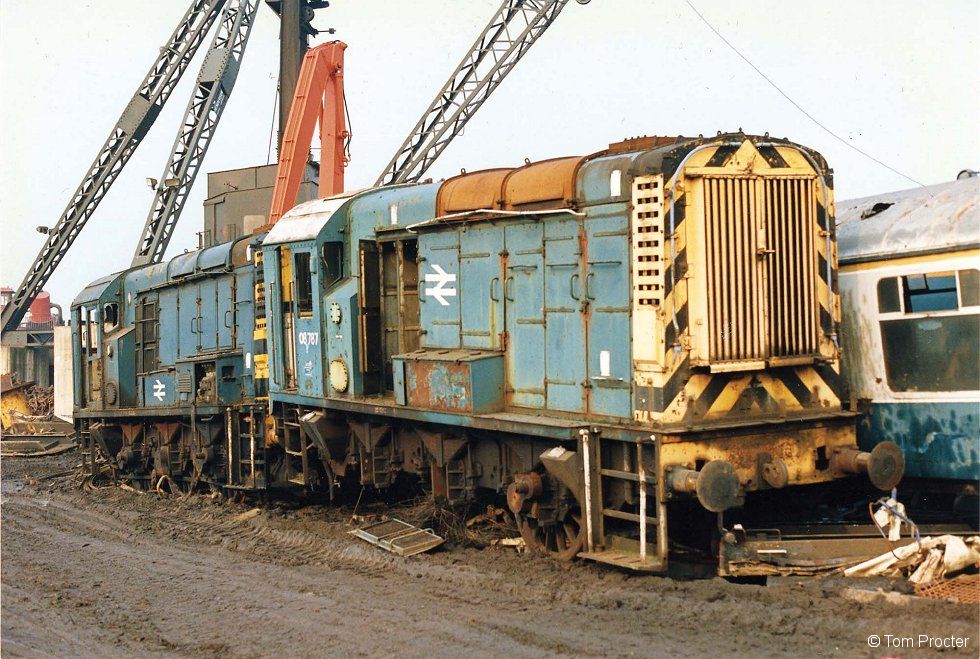 Although the pictured locomotive is numbered 08787 it is in reality 08296 masquerading as 08787. The photograph was taken in the Rotherham scrap yard of C. F. Booth on 19th February 1994 (08671 is behind). Study of the photograph clearly shows frame and other characteristics that mean it has to have been originally numbered below 08699. The bodyside doors though are from a locomotive in the series 08177-08266/08369-08387 and are actually believed to be from 08177 which almost certainly donated its doors to the doorless hulk of 08296 in late 1992 whilst at Crewe Works..   Tom Procter 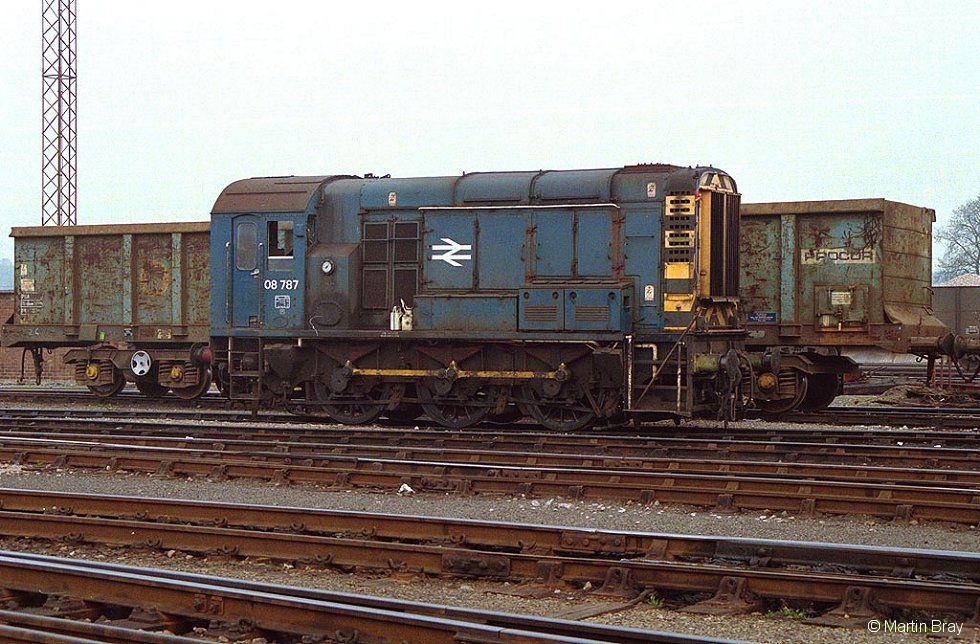 Pictured is the genuine 08787 in British Rail days when on duty at Severn Tunnel Junction Yard on 16th April 1987. Comparison of this photograph with that opposite clearly shows frame and other characteristics that distinguish it as a locomotive originally numbered above 08698. Note the style of bodyside doors and presence of two frame mounted cabinents, also the presence of train air-braking equipment on the buffer beam   Martin Bray

Since 08787 became 001 in 1992 its movements and activities have not always been well recorded. It is known that it moved from Crewe to ABB British Wheelset, Trafford Park, Manchester in January 1995, returning to ABB Transportation, Crewe the following August. In February 2000 it acquired new owners and has subsequently seen use at various Quarries and stone terminals. Thus, if anyone has observed this locomotive since 1992 they are asked to submit their observations. Further details are given under the ‘Ex BR Class 08’s of the Somerset Quarries’ unsolved dilemma. 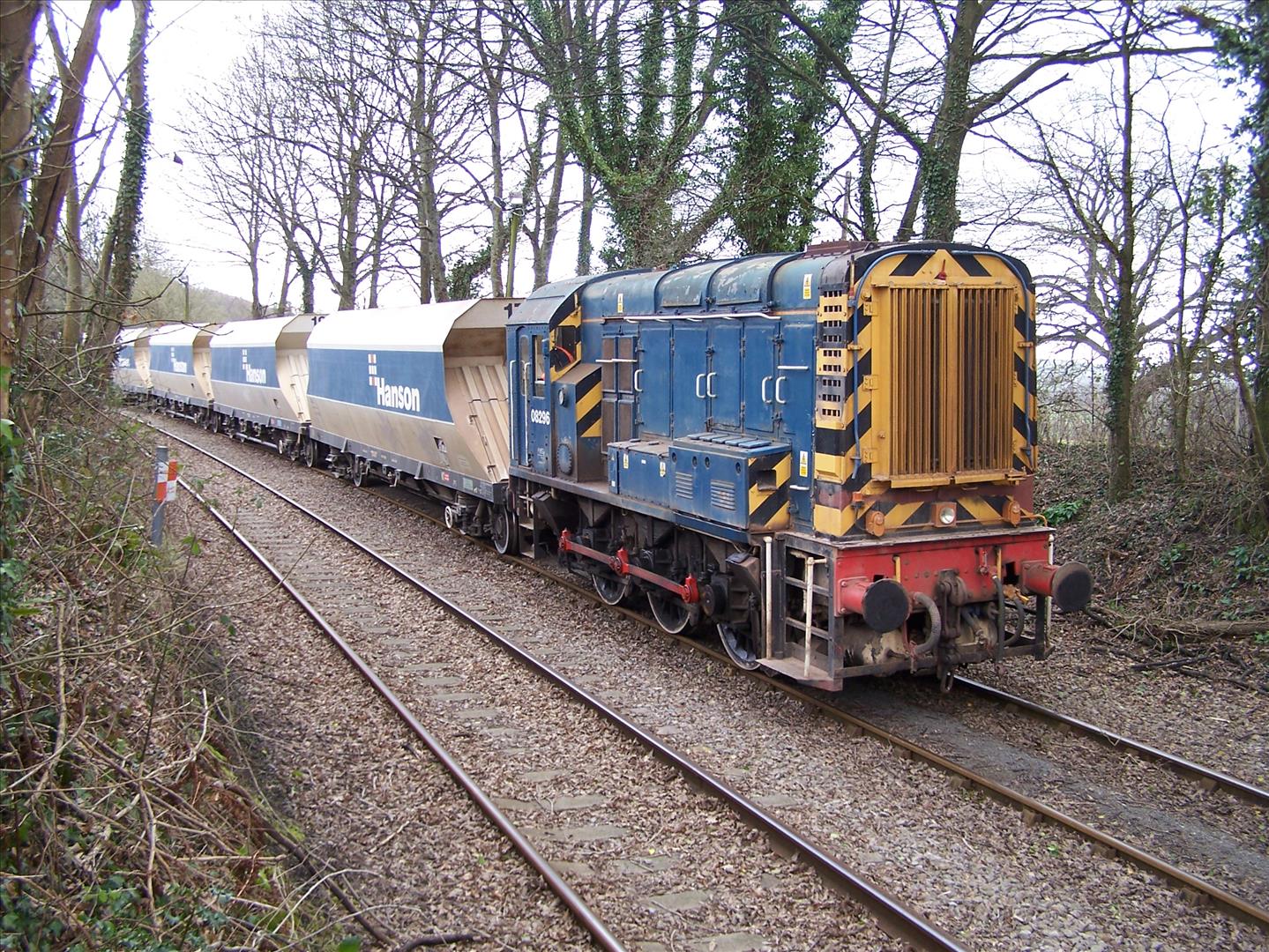 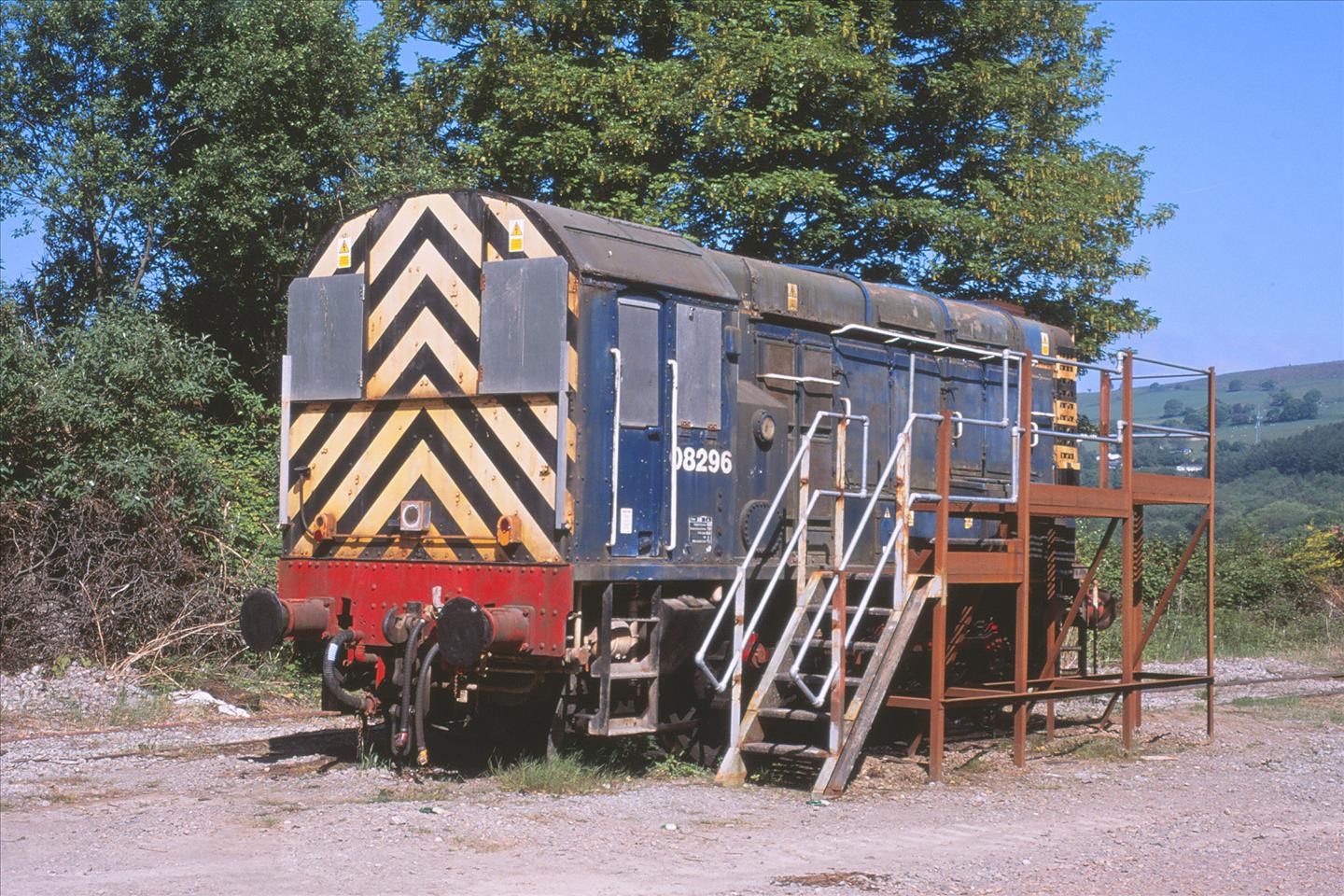 08787 in 2013. This picture was taken on 6th June 2013 at Machen Quarry, near Newport. Despite appearances it does still see regular use.   Jonathan Longbottom