Awaiting restoration by the LMS Coach Association and located at Peak Rail, Darley Dale, Derbyshire is LMSR Open Third 27109. This is to period 3 design having been built in 1945 at Wolverton Works. It was withdrawn in the 1960’s and seemingly disappeared until the late 1980’s. It is presumed that during this period it was in Departmental service as an office coach but no departmental / internal user number has ever been traced as being assigned to it. So where exactly was it and what was it used for in that period? This question remains to be fully answered.

The carriage arrived at Peak Rail early in 2000, prior to which it had been located at West Coast Railway Company/Steamtown Railway Centre, Carnforth, Lancashire. It arrived at Carnforth sometime between 28th August and 4th November 1990 following acquisition of the site by David Smith. This was one of a number of items of rolling stock owned by David that he had previously kept at the premises of his families coal merchants and haulage company William Smith (Wakefield) Ltd., located at 157 Dewsbury Road, Wakefield. The only observation of 27109 their so far received was made on 26th August 1990. When it arrived and from where is not known although p.54 of the April 1985 Rail Enthusiast records it as being disposed of to William Smith (Wakefield) Ltd., but gives no further details about its origin or destination. Did anyone else ever see the carriage at Wakefield between 1985 & 1990? Subsequently it was been established that the carriage was sold from Ilford. Precisely where at Ilford is not known. Could it have been located somewhere within the depot / workshop complex or was it moved to Ilford from elsewhere for disposal? 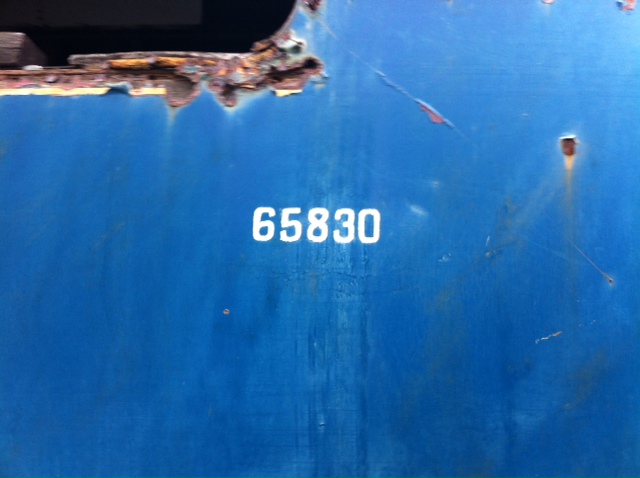 At some time prior to 1985 the number 65830 was applied to the carriage. Exactly to what this refers is a mystery. The number does not appear to correlate with any departmental or capital stock numbering series. It might help establish where it was located though if some one noted a carriage with this number somewhere or other?

A possibility is that 65830 is the TOPS STANNOX location code for where the carriage was located. Code 65830 referring to Monument Lane, Birmingham. Could it have been that at some point the carriage saw use at that location and this could be an explanation for the number. Did anyone ever see this carriage at that location or one fitting its description, possibly in use as temporary office accommodation or similar?

It has also been suggested that the number might have been applied whilst at Ilford. It is known that in the early 1980’s several withdrawn LNER design Liverpool Street-Shenfield (Class 306) EMU Cars were used internally at the depot after withdrawal. These initially retained their 652xx, 654xx, 656xx numbers before allocation of Internal User numbers. Could it have been that if this carriage was at Ilford at that time it was unofficially or mischievously given number 65830 to fit in with these. The reason for choosing ’30’ being that set 030 was the one disposed of in the 1960’s so there would be no confusion with existing sets.

Also located at Ilford where  DE320837 and DE320838 that formed a two car set used for testing overhead line equipment.  DE 320837 was an instrumented coach fitted with two pantographs and a central observation dome.  DE320838 was a generator coach with workshop and guards compartment. Perhaps 27109 had a connection with these.

Mysteries also surround two other carriages acquired from BR in the 1980’s by David Smith. The above mentioned Rail Enthusiast magazine also quotes the acquisition of KDM395892 and KDM395997 by William Smith (Wakefield) Ltd.

KDM395997 had been located at Wavertree Yard, Edge Hill, Liverpool.  A more recent report suggests that the sale of KDM395997 was rescinded and it was broken up at Downhill Carriage sidings, adjacent to Wavertree Yard, in May 1986.  Can anyone confirm this was the case?   What does seem more likely is that its body was lifted off its bogies and moved to Camelot Theme Park, Charnock Richard, Lancashire where it was used as a shop/information centre.  It later moving to the American Adventure, Ilkeston, Derbyshire where it is presumed it was scrapped in the late 1980’s.  Did anyone ever see KDM395997 at these locations and if so when?

Unfortunately, other carriages acquired by David Smith also suffered vandal attacks and were subsequently scrapped. DS70245 (originally LMSR BCK 6869) was vandalized at Woking before collection and its sale rescinded, it was broken up on site in 1992. Mark 1’s 13322, 13341, 25241 and DS70246 (originally LMSR BCK 6840) were all vandalized whilst stored at Horbury Station Coal Yard and subsequently broken up on site.