GWR Mink G 112889 spent many years at Thirsk in use a Stores Van. This was the only one still located there on 6th April 1980 when photographed by Paul Bartlett.

Although not strictly Non-Passenger Carrying Coaching Stock (NPCCS), the close resemblance of Freight Stock GWR Mink G’s to NPCCS GWR/BR Fruit D’s does sometimes cause confusion. Thus, the GWR Mink G’s which saw Departmental/Internal Use at Thirsk have sometimes been reported as Fruit D’s. These were of course a noteable landmark for those travelling through Thirsk on the ECML during the 1970’s and early 1980’s.

How many GWR Mink G’s were located at Thirsk, which and when is though far from clear. Observations made and photographs taken at Thirsk of the GWR Mink G’s be particularly useful in solving the mystery.

What has been confirmed is that by the 1980’s only one remained. This was 112889, as pictured above. Of note though is that it is marked as condemned in May 1964. This tallies with BR Rolling Stock Library Records. These though don’t show a disposal, just that it was written off in December 1971 by when it was presumably located at Thirsk. This suggests that it neither carried, nor was allocatted, an internal user number. In May 1993 112889 was acquired by the GWR 813 Preservation Fund and moved to the Severn Valley Railway where it is still located.

Things now become a bit more complicated. The North Eastern locomotive Preservation Group (NELPG) now own 112835, latterly numbered 042432 and normally located at Deviation Shed, Grosmont on the North Yorkshire Moors Railway (NYMR). The 6th edition of the NYMR Stock Book says of 112835. “112835 along with one other example languished beside the main line at Thirsk for many years until it was declared surplus in January 1979.” From this one presumes that 112835 & 112889 were the two at Thirsk in the late 1970’s. The photographs below though suggest this might not actually have been the full story. 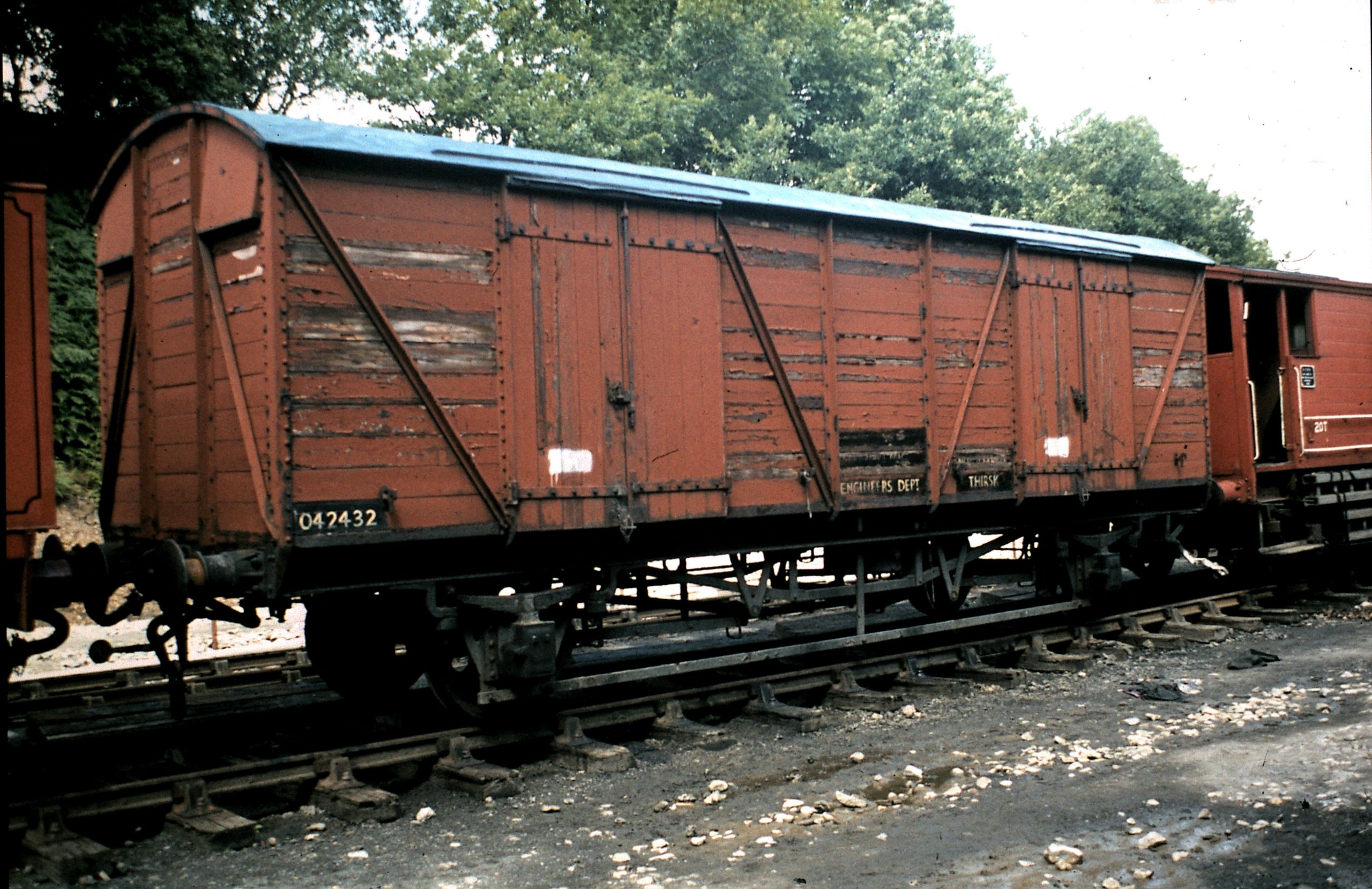 GWR Mink G 112835, then still numbered 042432, photographed at Grosmont, North Yorkshire Moors Railway on 6th August 1979. Note the NRM branding on the doors had by then been painted out. Stephen Walker

The first of these two photographs suggests 112835-042432 had left Thirsk earlier than January 1979. There is no doubt that the photographs are of the same Mink G. The most notable difference being that in 1978 ‘NRM’ is painted on the doors in white and in 1979 this had been painted over in white. The Barry Hickman authored book Internal User Vehicles No.2 gives its allocation as York Warehouse Yard and To NYMR (no date given). Whilst ‘The Railway Observer’ (p.162, April 1979) records 042432 being offerred for sale at York Warehouse Yard. So when did 112835-042432 move from Thirsk to York?

Currently on display at the National Railway Museum (NRM), York is 112884. Prior to restoration this carried number 042431 and branding suggesting that it was based at Thirsk. Published NRM records give its accession number as 1978-7101, indicating it was taken into the National Collection in 1978. It should though be noted that it probably arrived at York at an earlier date, the Barry Hickman authored book Internal User Vehicles No.2 gives the allocation as Thirsk and moving to NRM 1977.

Comments, observations and photographs that would help solve this mystery would be welcomed by Peter Hall.